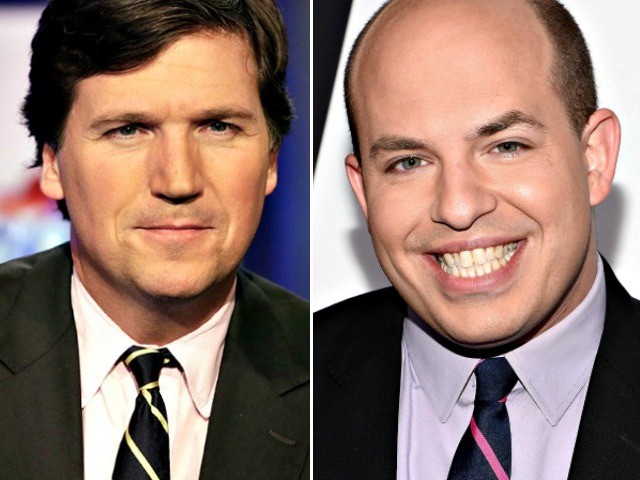 Fox News host Tucker Carlson blasted CNN and its head media reporter Brian Stelter Friday, accusing the network of “defending Antifa” after Stelter challenged a claim made by Carlson regarding Antifa’s harassment of his home.

CNN published a story from Brian Stelter Friday with the headline “Tucker Carlson claimed his door was ‘cracked’ by Antifa protesters. The police saw no sign of that.”

The article calls into question a singular claim made by Carlson to the Washington Post: that an Antifa activist cracked his front door by throwing his body against it.

Last week, Carlson’s wife was home alone when a D.C. Antifa group surrounded his home and terrorized his family. They shouted, “Tucker Carlson, we will fight. We know where you sleep at night!”

Brian Stelter has now, for some reason, decided to focus on one detail of Carlson’s account of what happened in order to cast doubt on his story.

Liberal critics of Carlson have cast doubt on that claim by saying there was no evidence of damage to the door. They have accused him of lying and exaggerating to score political points. So CNN contacted the D.C. police and asked about the door. The police report about the incident did not mention any damage on the door. Was there any sign that it was cracked, as Carlson claimed?

A police spokeswoman responded, “MPD did not observe any visible damage to the front door of the victim’s house the night of the incident.”

This paragraph is immediately followed up by this line: “It is still possible that the door was cracked.”

Stelter contacted Carlson for a comment on the story, to which he responded, “CNN has repeatedly defended Antifa, and you are doing it again now.”

“Your story is a disgusting attempt to minimize an attack on my family and bring more pain to my wife and four children. I’m not playing along. I hope you’re ashamed of yourself. You should be,” Carlson also told CNN.

Stelter then wrote, “For the record, I said on last week’s ‘Reliable Sources’ that ‘it is absolutely inappropriate and unacceptable for protesters to show up at his own home to try to make him feel threatened where he lives.’”

To his credit, Stelter has condemned the use of these harassment tactics on Carlson. But Carlson’s condemnation of CNN is still well deserved. Zeroing in on one small detail to try to paint him as dishonest after his family was targeted for harassment is ridiculous.

And, by Stelter’s own admission, he doesn’t even debunk Carlson’s claim–the door very well could have been cracked.

The Fox News host is also 100% right for calling out CNN’s encouragement of Antifa.

While Stelter himself hasn’t made the kinds of equivocations that his fellow CNN employees have, the network’s hosts and commentators have repeatedly whitewashed, made excuses for, and outright defended Antifa, despite the group’s open calls for intimidation and violence.

CNN host Chris Cuomo said in August that while violence is wrong, if you are doing it to fight “hate,” you are “on the side of right.”

Don Lemon has also repeatedly defended the group. Lemon said in August, “Listen, no organization’s perfect. There was some violence. No one condones violence, but there were different reasons for Antifa and for these neo-Nazis to be there. One, racists, fascists, the other group, fighting racist fascists. There is a distinction there.”

The CNN host again defended the tactics of the Antifa group Smash Racism DC, the same group that targeted Carlson, in September.