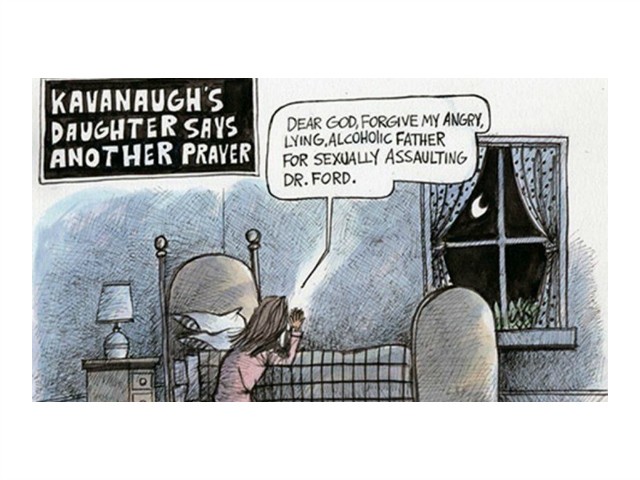 During his dramatic testimony last Thursday to defend his name against a slew of unsubstantiated and uncorroborated sexual misconduct allegations, the Supreme Court nominee told the story of his ten-year-old daughter, Liza, saying to her older sister, “We should pray for the woman” — meaning pray for Kavanaugh’s first accuser, Christine Blasey Ford.

Britt apparently found the idea of a young child having the maturity and mercy to pray for her own father’s accuser fair game for an attack against her.

Under his signature on the cartoon, Britt added, “Illinois Times” and “Creators.com.”

Creators.com is Creators Syndicate. Illinois Times is a free weekly paper in the Springfield area.

After the backlash began to brew, Illinois Times released a statement distancing itself from Britt:

Clarification regarding the Judge Kavanaugh cartoon by Chris Britt:

While Chris Britt is a regular contributor to Illinois Times, he is not an employee and also engages in work for other publications across the country. The recent cartoon involving Kavanaugh’s daughter was posted on Chris’ own Facebook page; it did not appear in our publication or on our website[.] The Illinois Times name should not have appeared on the cartoon in question and we have asked Chris Britt to remove it.

For his part, Britt appears to have deleted his Facebook page after publishing the cartoon.

The cartoon has also not yet been added to his Creators Syndicate page, where the rest of his work is, including this baseless attack on Kavanaugh, a cartoon depicting President Trump flying his plane into the World Trade Center, and another where a heroic FBI agent points a gun at the President of the United States and calls him a “dirtbag.”