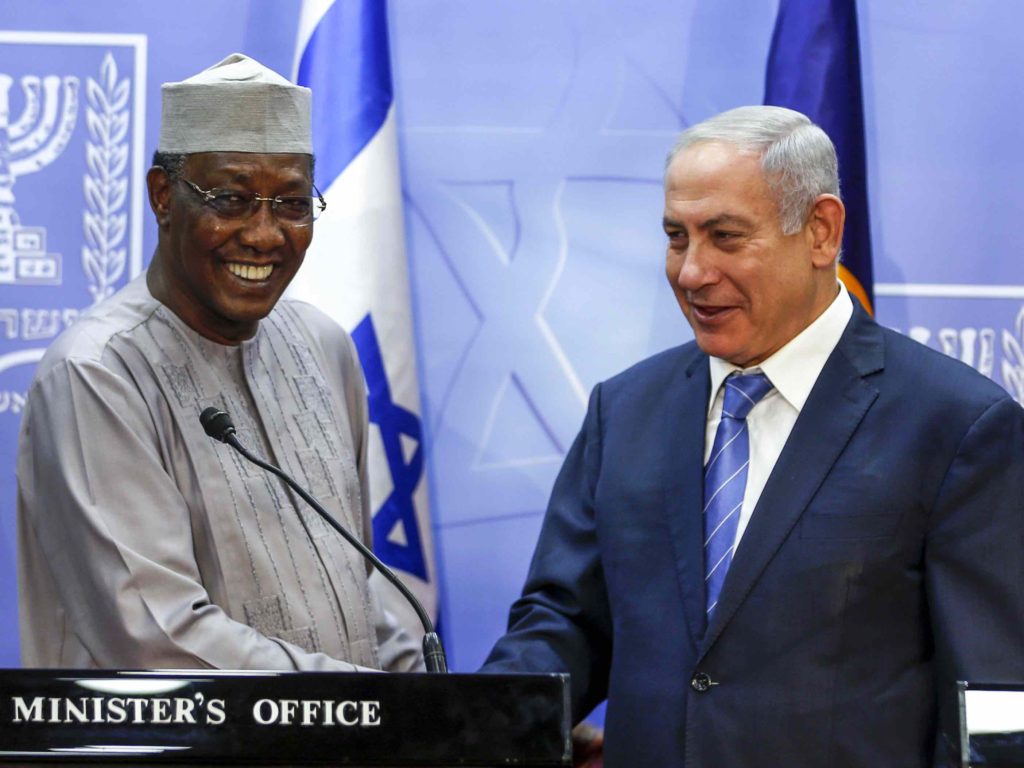 Airbnb’s partial boycott of Israel last week came just as the Arab world, Africa, and Eastern Europe moved closer to the Jewish state. These two diametrically opposed developments – one negative and one positive — showed that a race is on between competing global movements to determine whether Israel will sink or swim in the international area.

On the negative side, on November 19, the Silicon Valley-based tourism behemoth Airbnb announced that it is delisting Jewish-owned properties located in “Israeli settlements in the West Bank” from its website. Airbnb chose not to delist properties in the so-called “West Bank” owned by non-Jews.

Airbnb’s decision to adopt a policy that is openly discriminatory towards Jews was the result of years of lobbying and pressure from the UN Human Rights Council, which the Trump administration left in June. The UN Human Rights Council was joined in its campaign by the European Union (EU), by EU member states, and by U.S.-based foundations ideologically aligned with the hard left.

These forces, which share an aversion to nationalism, and ascribe to post-nationalist globalism, have combined since at least 2001 to achieve the goal of delegitimizing the existence of the Jewish state while legitimizing terrorism and war against Israel.

Airbnb’s move is a testament to the effectiveness of this campaign — as are the growing disenfranchisement and intimidation of pro-Israel students on college campuses; the boycotts of Israeli exports; and the mainstreaming of extremist politicians who refuse to accept the legitimacy of Jewish nationalism or Jewish self-determination.

Airbnb seemingly decided that the Palestinian conflict with Israel is so acute and horrible that it makes sense to discriminate against Israel Jews, while giving a pass to Palestinians who enact capital punishment against Palestinians who sell land to Jews and kill Jews who enter areas under their control.

Airbnb also opted to harm the economic interests of Israeli Jews while ignoring regimes that illegally and brutally control disputed areas — from Tibet, to Northern Cyprus, to the Western Sahara.

As Airbnb was striking a blow against Israel on behalf of the informal alliance of globalist anti-Jewish interests, Israel was making extraordinary gains in multiple other theaters.

The Arab leaders assembled in Rome for the MED2018 conference, in contrast to the Western Europeans and the left, are tired of the Palestinians. The clear preference of the leaders of these states is not to boycott Israel, but to expand contacts and relations with the Jewish state. Their behavior in Rome made clear that they are unwilling to subordinate their shared interests with Israel to the Palestinians’ unappeasable animosity towards the Jewish state.

For instance, although Qatar has been one the chief sponsors of Hamas’s terror state in Gaza in the past, its foreign minister chose not to mention the Palestinians in his enumeration of the chief challenges facing the Middle East.

Oman’s foreign Minister Yusuf bin Alawi bin Abdullah resonated with the basic position of the conference’s Arab participants when he called on his fellow Arab governments to “come to terms with the reality that Israel is a fact of life in the region,” and said that Israel deserves its share of “rights as well as obligations.”

(On October 26, Israeli Prime Minister Benjamin Netanyahu paid an official visit to Oman – the first by an Israeli leader to the sultanate since 1996.)

In a question-and-answer session at the MED conference with Yuli Edelstein, the Speaker of Israel’s Knesset, almost all the questions related to the threat Iran poses to the nations of the region on the one hand, and Israel’s technological advances on the other.

The events in Rome bore out positions stated off-the-record by senior Arab officials to Breitbart News in recent months. They claim that whereas for seventy years, the Arab League organized itself in opposition to Israel, the time has come for the Arab League to organize itself in opposition to Iran and Turkey, the two states those officials identified as the gravest threats facing the Arab world today.

On the heels of the MED2018 conference, on Sunday, Chad’s President, Idriss Deby, landed in Israel for a previously unannounced four-day official visit. Majority-Muslim Chad cut off its diplomatic ties with Israel in 1972. But Deby said that he views his visit as a major step towards reestablishing full diplomatic relations between his country and Israel.

Over the past two years, Netanyahu has travelled to Africa three times. In each visit he met with multiple African leaders. In his third visit – a one-day trip to Kenya –Netanayhu met with 11 African leaders in a day. All were keen to develop their agricultural and military ties with Israel.

During Deby’s visit, the Prime Minister’s office revealed that Sudan is also considering reopening diplomatic ties with Israel, and that Netanyahu will soon follow up his trip to Oman with one to Bahrain.

In South America, Brazil’s newly elected president, Jair Bolsonaro, announced days after his election on October 28 that he intends to move quickly to keep his campaign promise to move Brazil’s embassy to Jerusalem and to close the Palestinian embassy in Brasilia.

“Palestine first needs to be a state to have the right to an embassy,” Bolsonaro said on the campaign trail.

The Palestinians have responded with alarm to Israel’s rapid expansion of its diplomatic relations in the Arab world and beyond. But whereas the Palestinians remain a top agenda item for European leaders and leftist politicians and activists in the West, Arab leaders are unlikely to revert to their historic willingness to keep their ties to Israel captive to the Palestinians and their campaign to destroy the Jewish state.

As for Europe, the governments of Western Europe remain committed to their anti-Israel agenda, and indeed, seem continuously to escalate their diplomatic and economic warfare against Israel, both directly and through the non-governmental organizations (NGOs) they utilize as agents But many governments in central, eastern, and southern Europe are moving in the opposite direction.

Shortly after Deby landed in Israel, Czech President Milos Zeman began an official visit to Israel. The purpose of his visit was to open “Czech House” in Jerusalem. While not officially attached to the Czech embassy in Tel Aviv, Czech diplomats will be able to work out of Czech House. Zeman views the move as a step towards the relocation of the Czech embassy to Israel’s capital.

In the spring, Zeman advocated for the Czech Republic to follow the United States’ lead and move its embassy to Israel, but he was overruled by the Czech prime minister, who cited pressure from the EU to retain the embassy in Tel Aviv.

In a meeting with Israeli President Reuven Rivlin, Zeman expressed skepticism at the desirability of Palestinian statehood.

Other Eastern European states are moving in a similar election, against the wishes of EU leaders. Earlier this month, the Jerusalem Post reported that German Chancellor Angela Merkel placed heavy pressure on Romania to prevent the Romanian government from relocating its embassy to Jerusalem.

Netanyahu has worked assiduously to build ties with EU bloc countries outside the power centers surrounding Brussels. At the beginning of November, for example, Netanyahu flew to Bulgaria for a summit with the leaders of Bulgaria, Romania, Greece, and Serbia. He explained that he wants to work with these countries to “change the hypocritical and hostile approach of the EU” towards Israel.

Since Israel embarked on the failed peace process with the Palestine Liberation Organization (PLO) in 1993, aside from Netanyahu, Israel’s leaders have believed that Israel’s diplomatic status is directly linked to the achievement of peace. That position gave the PLO effective veto power over Israel’s diplomatic initiatives. And the PLO used its power to reduce Israel’s diplomatic standing to unprecedented lows throughout the Western world.

But Netanyahu sees the world differently. In a speech a day before his visit to Oman, Netanyahu explained his view of the Palestinians’ proper place in Israel’s foreign policy calculations:

We always thought that if we solved the Palestinian problem it would open up the doors of peace with the broader Arab world. And that’s certainly true if you could do it. But it may be equally true and perhaps even truer that if you open up to the Arab world and you normalize relations with them it will open the door for an eventual reconciliation and peace with the Palestinians.

As for the wider world, Netanyahu said Sunday that he believes that Israel’s diplomatic position internationally is a function of its strength.

In his words: “Every week we see the implementation of this concept, of cultivating economic-technological strength, alongside security-intelligence strength, to receive political-diplomatic strength. This is happening before our eyes, one might say, on a daily basis.”

Netanyahu’s visionary foreign policy has made him the most successful statesman in Israel’s history. The globalist left’s increased radicalism and its concomitant hostility towards Israel is like a lit fuse that has caused Netanyahu to rush to develop ties with as many governments as possible, as quickly as possible.

The contrary developments this week with Airbnb on the one hand, and Deby and Zemano on the other, show that Israel is in a race against time to secure its position before the left rises to power again in the U.S., in Britain, and in other key Western states.