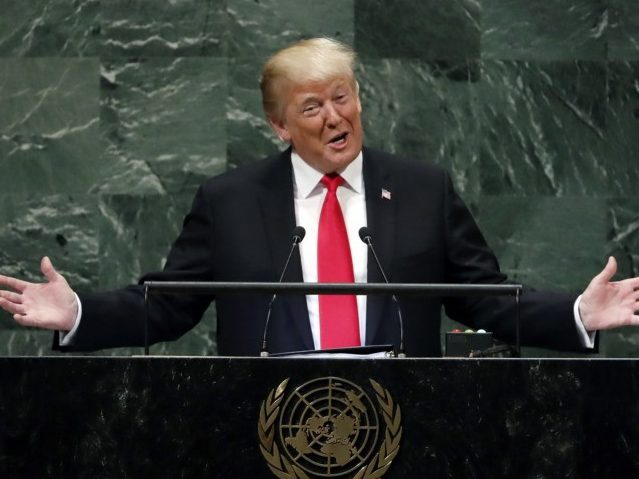 This is a shame, because his address last week was arguably the most significant foreign policy address any U.S. president has delivered since the end of the Cold War.

Many of Trump’s critics insist his view of the world rejects the liberal world order America has led and defended since the end of World War II. But that assessment misconstrues Trump’s world view. Indeed, that ignores it.

Trump’s critics cannot see his world view because they are convinced the universe of foreign policy is but a narrow linear spectrum that veers between isolationism and globalism.

Trump, who has been a peripatetic foreign policy practitioner since his early days in office, is manifestly not an isolationist. He does not believe the U.S. can walk away from the world. He is deeply engaged with the world.

The four post-Cold War presidents who preceded him in office — George H.W. Bush, Bill Clinton, George W. Bush and Barack Obama — differed on many things. But they shared the basic globalist view that U.S. foreign policy should be undertaken to advance ideological goals not directly related to U.S. national interests. They all agreed with the basic proposition that the U.S. should carry out its foreign policy under the aegis of international or transnational governing structures, which they perceived as somehow more credible than unilateral action or action undertaken in informal cooperation with likeminded governments.

In his address at the UN, Trump rejected that general disposition. Trump explained that the purpose of U.S. foreign policy is not to advance hypothetical universal values. It is to promote real American interests.

He declared forthrightly, “We reject the ideology of globalism, and we embrace the doctrine of patriotism.”

Trump’s opponents insist that his nationalist worldview is antithetical to American values and traditions. But this is wrong. At the UN, Trump rightly rooted his nationalist foreign policy in the Monroe Doctrine, named for America’s fifth president James Monroe, who announced in 1923 that while the U.S. would not interfere with existing European colonies in the Western Hemisphere, or in the internal affairs of European powers, it would view any future effort by European powers to colonize independent states in the Western Hemisphere as “the manifestation of an unfriendly disposition toward the United States.”

The Monroe Doctrine guided U.S. foreign policy for a century. It protected both the United States and the independence of the nations of Latin America.

In the aftermath of World War I, then-President Woodrow Wilson, arguably the first globalist president, sought to tether the U.S. to the League of Nations, a global government created in the 1919 Treaty of Versailles. The League of Nations was supposed to prevent war through global consensus.

Opposition to the treaty in the Senate was led by then-Senate Majority Leader Henry Cabot Lodge (R-MA). Lodge’s 1919 speech explaining why the U.S. must never accept any form of global governing authority that would diminish its sovereignty and independence blocked ratification of the treaty. In his speech, Lodge spelled out a nationalist vision for U.S. foreign policy that Trump now continues.

Lodge said, “National I must remain, and in that way, I like all other Americans can render the amplest service to the world. The United States is the world’s best hope, but if you fetter her in the interests and quarrels of other nations…you will destroy her power for good and endanger her very existence. Leave her to march freely through the centuries to come as in the years that have gone. Strong, generous and confident, she has nobly served mankind.”

At the UN, Trump echoed Lodge’s worlds from 99 years ago.

Throughout his speech, Trump embraced America’s leadership role in the world, but made clear that the purpose of U.S. leadership is first and foremost to secure American interests.

For instance, while he praised North Korean dictator Kim Jong-un’s “courage” for freeing American hostages, suspending nuclear and ballistic missile testing, and returning the remains of U.S. servicemen killed in the Korean War, Trump also said, without apology, that U.S. nuclear sanctions against North Korea “will stay in place until denuclearization occurs.”

Trump was even more forthright in his defense of his trade policies. After explaining how the trading policies and agreements he inherited have harmed the U.S. and benefited rule breakers, Trump turned directly to the greatest rule breaker: China.

“I have great respect and affection for my friend, President Xi,” he said, “but I have made clear our trade imbalance is just not acceptable. China’s market distortions and the way they deal cannot be tolerated.”

He gave much the same message to OPEC countries and to nations that receive U.S. financial and military assistance.

Regarding financial aid, Trump announced, “We are only going to give foreign aid to those who respect us and, frankly, are our friends. And we expect other countries to pay their fair share for the cost of their defense.”

The globalists argue that these sorts of statements harm America’s standing in the world by placing America’s allies and adversaries on the same moral plane. But they never explain how a nation like Germany, which has been outspoken in its efforts to undermine U.S. sanctions against Iran, and has accepted total energy dependence on Russia is in fact, a U.S. ally. They do not explain why it is more important for the U.S. to stand for populist forces like Egypt’s Muslim Brotherhood in pursuit of chimerical “democracy” than for it to stand with a friendly yet authoritarian regime like that of Egyptian President Abdel Fatah a-Sisi, which shares the U.S.’s profound interest in defeating jihadists.

Trump’s essential message is that the foundation of nationalist foreign policy is reality rather than ideology.

“America’s policy of principled realism,” he explained, “means we will not be held hostage to old dogmas, discredited ideologies, and so-called experts who have been proven wrong over the years, time and time again.”

In accepting the world as it is, his foreign policy doctrine is far friendlier to the nations of the world than the neo-imperialist policies of the globalists. The globalist aspiration to world government ignores differences in cultures and traditions in an effort to push everyone into an amorphous, homogeneous body of “internationalists” under governing structures that reflect the globalist aspiration and faith in nonexistent universal political traditions.

Trump waxed poetic about the rich diversity of the world community of distinct and proud nations.

“Each of us here today is the emissary of a distinct culture, a rich history, and a people bound together by ties of memory, tradition, and the values that make our homelands like nowhere else on Earth,” he said.

“I honor the right of every nation in this room to pursue its own customs, beliefs, and traditions. The United States will not tell you how to live or work or worship.

“We only ask that you honor our sovereignty in return.”

At the conclusion of his speech, he explained how “the doctrine of patriotism” can bring nations together to achieve common goals.

As always, he began his explanation by describing America first.

“In America, we believe in the majesty of freedom and the dignity of the individual. We believe in self-government and the rule of law. And we prize the culture that sustains our liberty -– a culture built on strong families, deep faith, and fierce independence. We celebrate our heroes, we treasure our traditions, and above all, we love our country.”

He then turned to his audience, the nations of the world.

“Inside everyone in this great chamber today, and everyone listening all around the globe, there is the heart of a patriot that feels the same powerful love for your nation, the same intense loyalty to your homeland….

“Our task is not to erase it, but to embrace it….

Trump’s doctrine of patriotism, maligned as somehow un-American by his critics, is the most American of doctrines. His speech was a seminal event in U.S. foreign policy because it restored a long tradition of American foreign policy.

As Lodge put it in 1919, “Our idea is to make [America] ever stronger and better and finer, because in that way alone, as we believe, can she be of the greatest service to the world’s peace and to the welfare of mankind.”

Trump has not relinquished American global leadership. He has restored it.