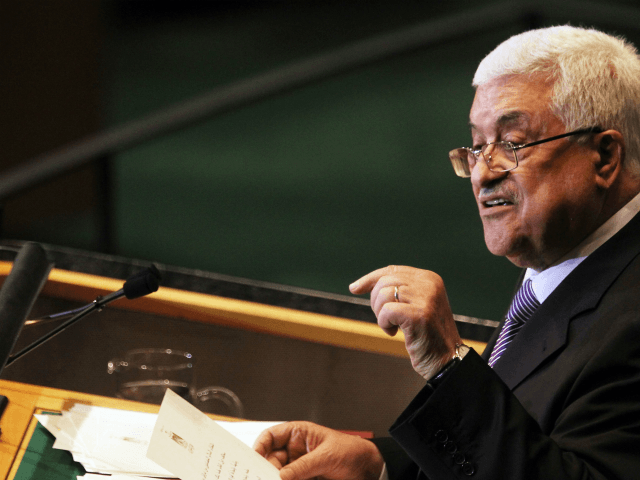 The U.S. government should bar Palestinian Authority Chairman and Palestine Liberation Organization leader Mahmoud Abbas from entering the United States on Wednesday for the opening of the United Nations.

In the days that have passed since Queens, New York, native and dual U.S.-Israeli citizen Ari Fuld was murdered by a Palestinian terrorist, we have learned several things about how his murder came about.

Together, they make a compelling case to take action against Abbas when he arrives at John F. Kennedy Airport in New York. (Abbas is scheduled to arrive in New York to address the UN General Assembly meeting on Thursday.)

Ari Fuld, a 45-year-old father of four, was stabbed in the back by Palestinian terrorist Khalil Jabarin last Sunday morning outside a shopping center at Gush Etzion Junction in Judea, south of Jerusalem.

On Tuesday, Palestinian journalist Bassem Tawil provided significant evidence that recent statements by Abbas may have encouraged 16-year-old Jabarin to murder Fuld – or any other Jewish person. Jabarin is from Dura, a village about a half hour south of the shopping center – a convenient site for his attack.

Tawil reported that Saturday, the day before the murder, Abbas gave a speech to the PLO’s Executive Committee in Ramallah. In his address, Abbas reportedly “repeated the old libel that Israel was planning to establish special Jewish prayer zones inside the Al-Aqsa Mosque,” which is on the Temple Mount. The Temple Mount is the holiest site in Judaism, the site of the Second Temple, which was destroyed by the Romans in 70 AD.

Given the harsh prohibitions on Jewish worship at Judaism’s holiest site, and their strict enforcement by Israel’s police, Abbas’s remarks were ridiculous on their face.

Not surprisingly, Abbas reportedly provided no proof of his allegation. Instead, he said that he was working with the Jordanian government to prepare a criminal complaint against Israel for its plan to permit Jews to worship in the mosque that he would submit to the International Criminal Court at the Hague.

According to Tawil, the pan-Arab and Palestinian media immediately picked up Abbas’s allegations. His claim that Israel is planning to permit Jewish people to pray at Al Aqsa mosque was reported as the top headline by Hamas and Palestinian Islamic Jihad news websites.

In the hours following Jabarin’s murder of Fuld, the Palestinian media reported that he has decided to kill a Jew in order to defend Al Aqsa.

In other words, as Tawil wrote, “the terrorist was influenced by Abbas’s incitement, and this is why he decided to set out on his deadly mission. There is no doubt that the terrorist saw the reports quoting Abbas’s claim that Israel was planning to allow Jews to pray inside the Al-Aqsa Mosque.”

Tawil also recalled that Abbas incited the 2015 Palestinian terror wave against Israel with his accusation that “Jews with their filthy feet were defiling the Al-Aqsa Mosque.”

On that occasion, Abbas explicitly called for violence, saying, “The Al-Aqsa [Mosque] is ours, the Church of the Holy Sepulchre is ours, and they have no right to defile them with their filthy feet. We will not allow them to, and we will do everything in our power to protect Jerusalem.”

“We welcome every drop of blood spilled in Jerusalem. This is pure blood, clean blood, blood on its way to Allah. With the help of Allah, every shaheed (martyr) will be in heaven, and every wounded will get his reward,” he stated.

Last week, Israel Defense Force Chief of General Staff Lt. General Gadi Eizenkot reportedly warned Israel’s security cabinet that Abbas is likely to use his speech to the UN General Assembly on Thursday to call for the Palestinians to open yet another terror campaign against Israel. Eizenkot placed the likelihood of a new terror campaign being initiated in the near future at between 60 and 80 percent.

Given his past behavior, there is a very real risk that Abbas will use his UN platform to encourage more conflict.

Over the past several months, since U.S. President Donald Trump recognized that Jerusalem is Israel’s capital last December, Abbas and his deputies have continuously condemned Trump and his advisors in the harshest language while boycotting the U.S. administration. On September 14, Israel’s Maariv published an interview with Abbas’s close advisor, PLO Secretary-General Saeb Erekat.

Erekat accused Trump of committing “genocide” against the Palestinians. He specifically alleged that Trump is carrying out the mass murder of Palestinians by cutting off U.S. funding to two Palestinian hospitals in eastern Jerusalem.

Abbas has called for the White House to be destroyed. And this September 11, the Palestinian Authority’s official media mocked the September 11, 2001, jihadist attacks by running a cartoon of Trump flying an airplane into a building shaped like the map of “Palestine.” According to Palestinian Media Watch, the map of “Palestine” was a map of Israel draped with the PLO flag.

The families of Americans murdered by Palestinian terrorists sent a letter to Trump on Sunday asking him to bar Abbas from entering the U.S. The terror victims’ families argued that under the Taylor Force Act, passed this year by Congress and signed by Trump, the Palestinian leader is legally barred from entering the U.S. due to the Palestinian Authority’s annual transfer of hundreds of millions of dollars to terrorists imprisoned in Israeli jails and to their families. According to the Jerusalem Center for Public Affairs, the PA budgeted $355 million for such payments in 2018.

Palestinian Media Watch made a similar request to block Abbas’s entry to the U.S. to Secretary of State Mike Pompeo. The State Department reportedly is loath to prevent Abbas from entering the U.S. due to the hosting agreement the U.S. forged with the UN. That agreement compels the U.S. government to permit the entrance of foreign leaders headed to the UN to enter U.S. territory.

Yet, as Palestinian Media Watch argues, the U.S. has blocked foreigners bound for the UN from entering the U.S in the past. For instance, the group noted, the Obama administration barred UN-bound Iranian diplomat Hamid Abutalebi from entering the U.S. due to his involvement in terrorist activity including the murder of an Iranian dissident.

On Sunday, the Times of Israel reported new information from a witness to Fuld’s murder that indicates Jabarin was specifically targeting Americans to kill last week.

Hila Peretz, a server at a falafel stand adjacent to the scene of the murder, reportedly told the publication that she served Jabarin falafel just before he killed Fuld.

Peretz told the publication, “After he came inside and ordered his falafel, he asked me two separate times if I spoke English. I told him ‘no’ and asked him what it was that he wanted.”

Jabarin didn’t respond to her question, but after the fact, Peretz concluded that he deliberately targeted Fuld, as an American.

“It was not as if he didn’t speak Hebrew and had been asking to speak English so he could make his order. We carried out our conversation in Hebrew,” she explained.

“There were other people in the area that he could have targeted first, but he chose Ari,” she said. “But them he didn’t target, he must have wanted an American.”

As the Times of Israel reported, Peretz noted that the security camera footage shows Jabarin pausing and waiting behind Fuld for nearly a minute as Fuld greeted several passersby.

Fuld saved Peretz’s life as he was dying.

After stabbing Fuld in the back, Jabarin turned to attack Peretz. With blood pouring down his back. Fuld turned around, pulled out his handgun and pursued Jabarin. He and a bystander shot him, moderately injuring him and ending his terror spree. Fuld collapsed and died a few hours later at Shaarei Zedek Hospital in Jerusalem.

The idea that Fuld, a native of Queens, New York, was targeted because he was both a Jew and an American is not at all far-fetched.

Abbas’s steady stream of anti-American and antisemitic rhetoric suggests that the Trump administration would be wise to heed the pleas of the families of the Palestinian Authority’s American terror victims and Palestinian Media Watch and bar him from entering the United States.