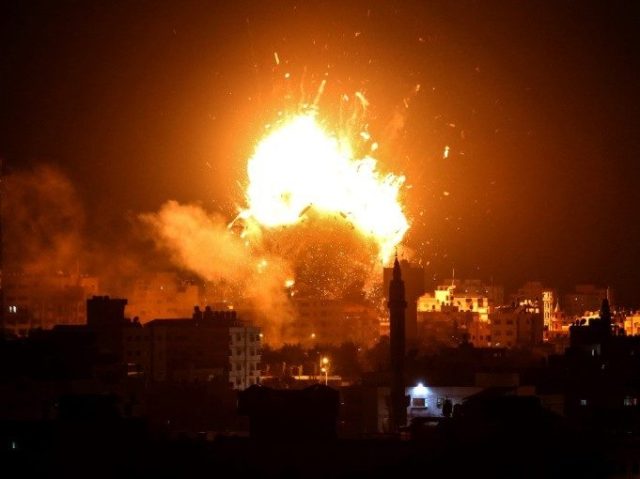 A Kornet anti-tank missile hit a civilian bus transporting Israeli soldiers adjacent to Israel’s border with Gaza at 4:30 in the afternoon on Monday.

According to the bus driver, 50 Israeli soldiers had alighted the bus just moments before it was hit by the missile. The missile struck while the bus was moving slowly towards a parking lot. One soldier, who was standing next to the bus, was critically wounded in the blast.

Immediately after the missile strike against the bus, Hamas and its partner, Islamic Jihad, initiated the largest bombardment of Israel they had ever undertaken from Gaza. By late Tuesday morning, the two terror groups had fired more than 400 projectiles into Israel. Fifty Israelis were wounded in the onslaught. One person was killed when a mortar hit an apartment building in Ashkelon. Hundreds of mortars and rockets and missiles were intercepted by Israel’s Iron Dome anti-missile batteries. And the government announced it was rushing more Iron Dome batteries to the area.

In the hours following the joint Hamas-Islamic Jihad assault, Prime Minister Benjamin Netanyahu and Defense Minister Avigdor Lieberman (who stepped down Wednesday) ordered the Israel Air Force (IAF) to carry out a large-scale air assault against Hamas command posts and other facilities in the Gaza Strip.

In a media briefing, a senior Air Force commander said the IAF strikes since Monday night have been the most far-reaching raids Israel has ever conducted in Gaza. More than a hundred targets were hit in under two hours, he said.

Israel’s Security Cabinet, which is authorized to order the Israel Defense Forces (IDF) to open large-scale operations, including war, convened on Tuesday morning. Its final decision was to walk back the conflict and agree to a ceasefire, with no terms.

The cabinet’s decision was met with fury by residents of the south. They came out in droves, blocked a major highway leading to the embattled border town of Hebron, and set fire to tires while attacking the government for opting not to go to war against Hamas.

Defense Minister Liberman held a press conference Wednesday afternoon announcing his resignation in protest against the decision to walk away from the conflict.

Netanyahu, for his part, defended the government’s decision in a speech on Wednesday morning. With Liberman’s resignation imminent, Netanyahu said that he was acting on information about Israel’s enemies that he cannot share with the public. And he insisted that Israel would take action to defeat them at a time and in a manner of its choosing.

In all likelihood, he was talking about Iran.

To understand the role Iran is playing in Gaza, it is important to take a close look at the missile strike against the bus on Monday.

Hamas terrorists in Gaza filmed the blast. According to Israel’s Hadashot news network’s veteran Arab affairs commentator, Ehud Ya’ari, the footage of the blast was first broadcast on Iranian television in Lebanon and only later rebroadcast on Palestinian television.

This is highly significant. The initial Iranian broadcast indicates that Hamas and Islamic Jihad are not independent actors in their aggression against Israel. Rather, they are Iranian proxies. They receive their orders from Iran’s Revolutionary Guard Corps and Iran’s Lebanese army, Hezbollah. And they report to their Iranian and Lebanese commanders.

When Hamas and Islamic Jihad go to war against Israel from Gaza, they do so not merely because they have become convinced that Israel will go to great lengths to avoid a major military operation against Gaza that would require the IDF to deploy large numbers of military forces and assets to Gaza. (Although surely their awareness of Israel’s deep-seated desire to avoid another major war with Hamas-Islamic Jihad in Gaza empowers them to attack.)

And they shower Israel with missiles, rockets, and mortars merely because by agreeing to enable Qatar to transfer cash and fuel to Gaza to keep the Hamas regime afloat to secure a ceasefire, Israel showed Hamas that it can be extorted. (Although the knowledge that Israel is willing to be extorted to avoid war certainly also played into the Hamas-Islamic Jihad’s decision to attack Israel.)

The main reason Hamas and Islamic Jihad attacked Israel is because Iran told them to do so.

So when Israel decides not to take the bait but rather accepts a humiliating and – in an election year – politically costly ceasefire, we have to think about the relative balance of power today between Israel and Iran.

Outside of Lebanon, which Iran effectively controls through Hezbollah, Iran’s chief area of operations in Israel’s neighborhood is Syria, where Iran has been going from strength to strength. With each passing day, the Russian- and Iranian-Hezbollah-controlled regime of Syrian President Bashar Assad reasserts and reinforces its control over much of Syrian territory. As it does so, the threat of a major war that will pit Israel against Hezbollah forces in Lebanon, and against Hezbollah, Iranian, and Syrian forces operating under Russian protection in Syria, rises.

Gaza plays a role here, as it has in the past, because if Israel is sucked into deploying large numbers of forces to Gaza to fight Hamas, it will leave its Northern Front vulnerable. That is precisely what happened in the summer of 2006.

One of the most forgotten aspects of Israel’s 2006 war against Hezbollah in Lebanon is that it began in Gaza. Two weeks before Hezbollah opened hostilities against Israel by attacking a military patrol along the border, killing eight IDF reserve soldiers and stealing the bodies of two of the dead, Hamas carried out a similar operation in southern Israel.

On June 25, 2006, a combined force of terrorists from Hamas and the Palestine Liberation Organization’s (PLO) Fatah faction entered Israel from Gaza through an underground tunnel. They reached an IDF position along the border and attacked a sleeping tank crew. Two soldiers were killed, and three were wounded. One of the wounded, Cpl. Gilad Shalit, was captured and taken to Gaza.

Following the cross-border attack, Hamas and its terrorist allies carried out a large-scale bombardment of Israel with mortar and rocket fire.

Israel deployed a large number of ground and air forces to Gaza. So when Hezbollah attacked two-and-a-half weeks later, Israel was far more vulnerable than it would otherwise have been.

There are two main reasons that the prospect of war between Israel and Iran-Hezbollah in Lebanon and Syria has grown. First, Iran is interested in fighting before U.S. sanctions drive it into bankruptcy. And second, Russia’s recent turn towards Iran and Hezbollah and away from Israel has emboldened Tehran.

Until September 17, Russian President Vladimir Putin was sitting on the fence, with everything concerning Russian relations with Israel on the one hand, and Russian relations with Iran-Hezbollah on the other hand. Until September 17, Putin was interested in preventing an Iranian war against Israel even as he enabled Iran to assert control over Syrian through Hezbollah and the Assad regime. To thatw end, while fighting with Iran to secure Assad’s continued hold on power, he agreed to a coordination mechanism with Israel that enabled Israel to attack Iranian targets in Syria that directly threatened Israel. According to the Israeli government, in the 12 months preceding September 17, Israel carried out more than 200 airstrikes – or more than 4 strikes a week – against Iranian targets in Syria.

Rather than blame the incompetent Syrian forces that indiscriminately shot off missiles that downed their plane, the Russians blamed Israel, which had completed a strike in Syria 15 minutes before the Russian jet was downed.

Russia’s seemingly irrational assault on Israel, blaming it for an action undertaken by Syria, was a calculated move. By attacking Israel, Russia was able to use the episode as a means to end its tactical cooperation with Israel in Syria and swing entirely to Iran’s side.

Russia moved rapidly to complete its pivot to Iran.

Right after the Syrians shot down the Russian plane, the Russian Defense Ministry announced that it was deploying the more advanced S-300 surface to air missile system in Damascus. Barely a week later, the S-300 landed at Russia’s Khmeimim air base in Syria and was quickly assembled and deployed.

According to media reports, Israel has severely constrained its air activities in Syria since Russia delivered the S-300 battery. In the meantime, Iran has continued and stepped up its missile shipments to Hezbollah through the Damascus airport.

Last week, Israel carried out a major air exercise with the Greek air force. According to Israeli media reports, the purpose of the exercise was to train pilots to operate in the presence of an S-300 battery. Greece fields an S-300 system.

Since September 17, Netanyahu has tried on multiple occasions to meet with Putin, only to be rebuffed. Netanyahu met with Putin briefly in Paris over the weekend. The Israeli media reported that their brief exchange provoked Netanyahu to brief his cabinet that “the crisis with Putin is far worse than we thought.”

President Donald Trump was scheduled to meet with Putin in Paris. But shortly before Trump left for Paris, the meeting was postponed until November 30.

Given the inflamed situation in the north, Russia’s betrayal and Iran’s clear interest in provoking a two-front war, Netanyahu’s rationale for accepting the politically damaging and humiliating ceasefire with Hamas becomes clear. The main reason that Israel has gone to such great lengths to avoid a major conflict with Hamas is because it is mainly concerned with Hezbollah and Iran in the north. The IDF and the government have no interest in deploying thousands of troops to Gaza, where they will be unavailable to fight in the north when they are needed.

Presumably, Netanyahu is hoping that Trump will succeed where he has apparently failed in weakening Russia’s sudden determination to stand with Iran against Israel. Presumably he is hoping to delay major action against Hamas-Hezbollah-Iran until circumstances are less propitious for Iran both economically and militarily.

But as the missile attack on the bus, and Hamas’s unprecedented, ferocious rocket assault on southern Israel showed, the longer Israel waits to strike its enemies, the more powerful they become. So the longer Israel delays action, the more difficult it will be for it to defeat its enemies in a strategically significant way.

And as Lieberman’s resignation and the protests against the government from the beleaguered and infuriated residents of southern Israel demonstrate, the political price of delaying the inevitable may become prohibitive for Netanyahu and his political partners in his coalition government.