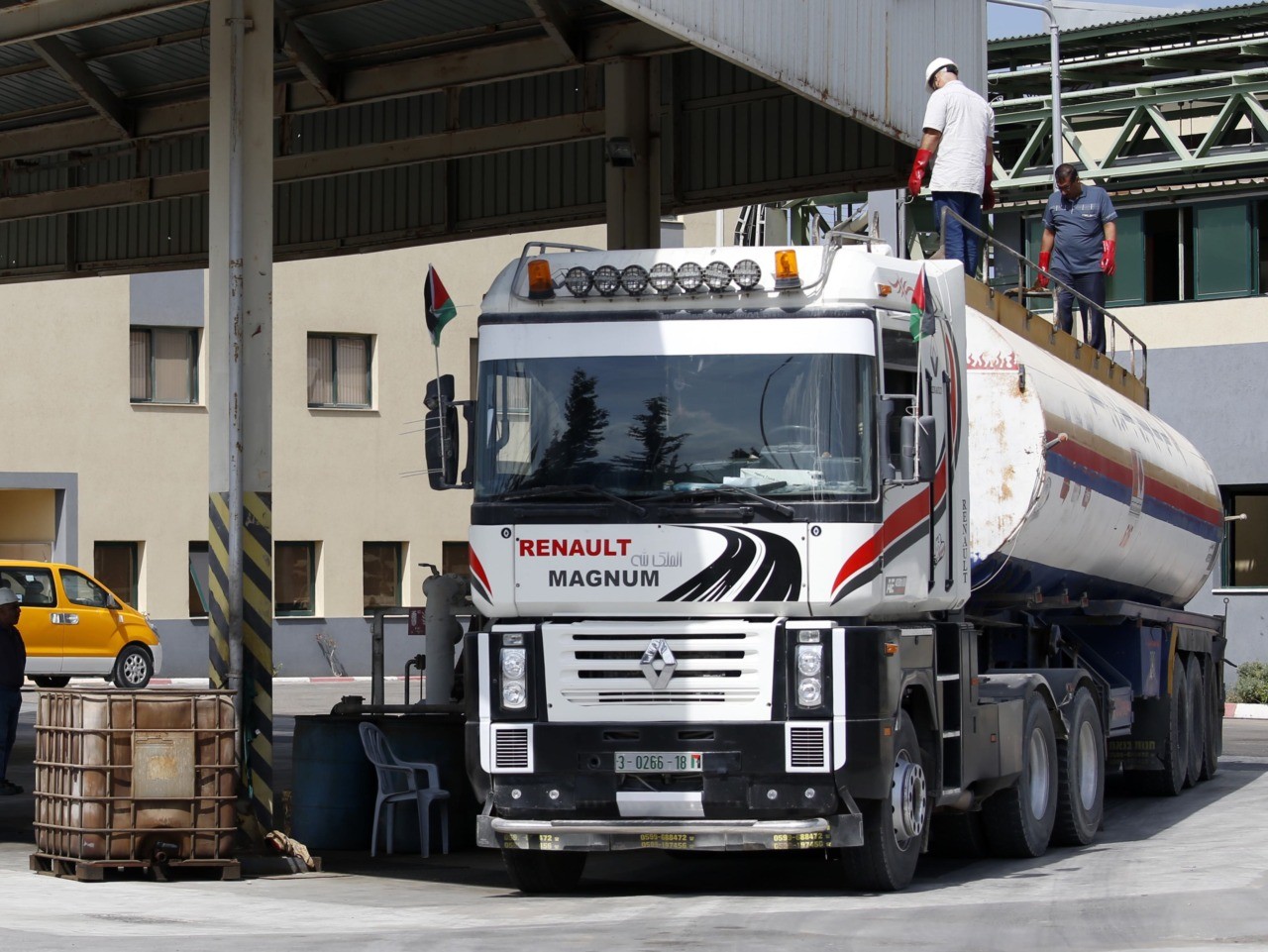 This week, an event occurred that has the potential to diminish permanently the lethal potential of the Palestinian conflict with Israel.

On Tuesday, two tanker trucks each carrying 35,000 liters of diesel fuel were delivered to Gaza through Israel’s Kerem Shalom border crossing. Another seven fuel trucks were expected to enter Gaza on Wednesday. According to the Jerusalem Post, within a month, 15 such fuel trucks will enter Gaza every day.

Why does this matter?

Tuesday’s fuel shipments to Gaza were a game-changer because they marked the first time that fuel was delivered to Gaza which wasn’t paid for and authorized by the Palestinian Liberation Organization (PLO) and the Palestinian Authority (PA) it controls. In fact, the PLO-controlled PA did everything it could to prevent the fuel shipments.

The PA was established in 1994 in the framework of the PLO’s peace process with Israel. Its purpose is to serve as the autonomous Palestinian government in Gaza, and in the Palestinian population centers in Judea and Samaria (the West Bank). The PA ruled both areas with an iron fist until June 2007, when the Hamas terror group wrested control over Gaza from the PLO in a violent coup.

To maintain its claim to Gaza after Hamas took over, the PA continued to fund Gaza. All international bodies and foreign governments that wished to donate to Gaza gave their funds to the PA in Ramallah, and the PA decided what to buy, whom to buy it from, and what to transfer to Gaza.

In April 2017, PA President and PLO chairman Mahmoud Abbas decided to use his economic control over Gaza to force Hamas to cede power to his PLO forces.

That month, Abbas announced that he was ending PA fuel payments to Israel for the Gaza Strip. The PA’s move compelled Israel to end its fuel shipments to Gaza. The Hamas regime had used the Israeli fuel to power Gaza’s power plant. The plant has been inoperative ever since and Gazans have had no more than five hours of electricity per day.

Abbas was responsible for the failure of the recent Egyptian-brokered truce talks between Israel and Hamas. During the talks, Hamas repeatedly demanded that the PA end its sanctions and restore its fuel payments to Israel in order to restore full electricity to Gaza or permit Qatar to pay for them. Abbas refused. He continued to condition the provision of fuel on the restoration of PLO control over Gaza.

The Qataris repeatedly offered to donate $60 million to the PA to pay Gaza’s electricity bill. Abbas and the PA repeatedly rejected Qatar’s offer.

Abbas’s refusal to reinstate fuel shipments to Gaza provoked Qatar to look elsewhere for a means to pay for Gaza’s electricity.

With Egyptian and Israeli agreement, Qatar struck a deal with the UN. Under the deal, Qatar gave the UN $60 million, which the UN in turn paid to Israeli fuel companies to provide diesel fuel to Hamas-controlled Gaza. Tuesday’s fuel shipments were the first ones that did not involve the PA in any way.

The PLO made no attempt to hide the strategic implications of the move.

A senior PLO official told the Jerusalem Post Tuesday, “We’re witnessing an attempt to bypass the legitimate leadership of the Palestinians. Hamas and Qatar are part of a suspicious conspiracy to liquidate the Palestinian cause and destroy our national project.”

UN Secretary General Antonio Guterres tried to deny the significance of Qatar’s move, and UN support for it. Guterres issued a statement thanking Qatar, adding that “Gaza remains an integral part of the two-state solution based on relevant UN resolutions.”

Despite Guterres’s statement, the fact that Qatar, Egypt, the UN and Israel all agreed that the time had come to bypass the PLO-ruled PA is a strategic game-changer for two related reasons.

First, by bypassing the PA, the Qatari-UN deal ended the PLO’s 54-year monopoly of power to dictate Palestinian living conditions. That monopoly is unlikely to be restored.

Ending the PLO’s economic monopoly power creates options and opportunities that were inconceivable until now.

Second, the fuel transfers to Gaza revealed the wrongness and the irrelevance of the PLO’s assertion that Gaza and the West Bank are politically and economically indivisible. The fuel shipments demonstrate not only that this is a lie, but that maintaining faith with the PLO’s ridiculous claim has been a major cause of Gaza’s indigence.

Israel withdrew completely from Gaza in August 2005. Since then, Gaza has operated as a de facto independent state. Given the affinity that the Gazans have with Egypt, and the lack of opportunity in Gaza, in August 2014 Egyptian President Abdel Fatah al-Sisi allegedly offered to quintuple the size of Gaza by adding 1,600 square kilometers of territory in the northern Sinai to Gaza. Sisi’s alleged plan involved establishing a Palestinian state in the area, and even resettling so-called Palestinian “refugees” in the Palestinian state in Gaza and the Sinai.

As for Judea and Samaria, Sisi’s plan called for the Palestinians there to continue exercising autonomy under the PA.

Sisi’s alleged offer was first exposed by Abbas himself. Abbas outlined the offer only to reject it out of hand in a speech to a PLO audience.

Shortly after the Israeli media reported Abbas’s speech, and the details he provided of Sisi’s alleged offer, both the Egyptians and Abbas denied the offer was ever made. U.S. intelligence sources told this writer at the time that the Sisi offer was torpedoed by the Obama administration.

Despite periodic reports that the Trump administration is interested in implementing the alleged Sisi plan in some form, and Israel’s willingness to support it, the Egyptian regime adamantly refuses to discuss it today.

Whether the Egyptians will ever agree to permit the northern Sinai to be joined with Gaza is anyone’s guess. But economically, the fuel deal, which ended the PA’s veto power over economic activity in Gaza, paves the way for deeper economic integration of Gaza with the Egyptian Sinai.

There is no reason for the Egyptians to deny Gazans the right to work in the Sinai or to integrate Gaza’s economy with Sinai. Such integration will be mutually beneficial for the underpopulated Sinai and the overpopulated Gaza Strip.

From a strategic perspective, economic integration between Gaza and the northern Sinai will significantly diminish the prospects for war.

To date, both the PA and Hamas have routinely used Gaza’s deliberate economic failure as a justification for war against Israel and as a means to wage war against Israel. Indeed, Hamas’s economic strategy for regime survival is to attack Israel.

We have seen Hamas’s economic policy in action every day since mid-March, when the Hamas regime in Gaza began sending tens of thousands of Gazan civilians to the border with Israel to provoke Israeli military forces.

Hamas is convinced – rightly — that these sorts of provocations build and maintain European and pan-Arab support. That support translates into economic aid. Economic assistance prevents mass starvation in Gaza. So from Hamas’s perspective, international economic assistance eliminates any need to develop Gaza’s economy and permits the terror group to use all of its economic resources to expand its capacity to attack Israel.

With no economic opportunities, Gaza’s captive population in turn has no better option than to serve as human shields for Hamas terror operatives in their assaults against Israel.

If Egypt permitted Gazans to work in the Sinai, the move would end Hamas’s economic stranglehold over the people of Gaza. They would have an option other than serving as human shields for Hamas terror groups attacking Israel.

And that brings us back to the fuel shipments that began on Tuesday. Those shipments created an opportunity, for the first time, to abandon the myth of the indivisibility of the Palestinian populations of Gaza and Judea and Samaria. By acknowledging their distinctive interests and helping the people of Gaza, despite the PA’s opposition, the UN, Qatar, Israel, and Egypt took a first, significant step towards adopting economic policies towards Gaza that will help its people end their dependence on Hamas.

The fuel shipments also opened the possibility of diminishing the aggressive power of both Hamas and the PLO by decreasing their capacity to exploit the penury of their captive populations to advance their never-ending war against Israel.