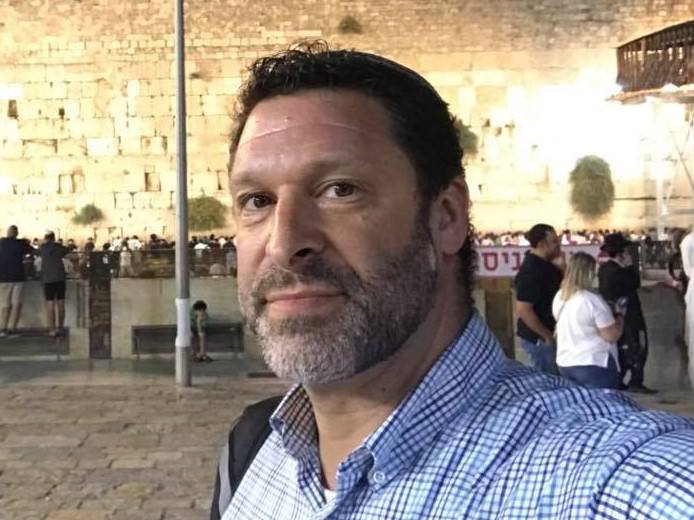 Ari Fuld, who was murdered Sunday outside of a supermarket in Gush Etzion, south of Jerusalem, was the sort of person you could always count on to put his own interests on hold to help Israel. His passion for Israel and its defense permeated everything he did.

Fuld, the New York native, U.S. citizen, and 45-year old father of four, did not even let his wounds stop him from defending Israel. After the Palestinian terrorist stabbed him in the back, Fuld — a combat verteran from Israel’s elite Golani Infantry Brigade — managed to swerve around and pursue his attacker, shooting him in the back several times before he collapsed from his wounds. He died shortly thereafter at a Jerusalem-area hospital.

Heartbroken by the news of the murder of a true patriot, friend & Israel advocate Ari Fuld, in Gush Etzion this morning. Ari was stabbed by a Palestinian terrorist and succumbed to his wounds. Thoughts are with the Fuld clan and especially his brother @HilzFuld pic.twitter.com/eEUbnR1pMJ

Very sorry to hear that my friend and IDF Paratrooper Ari Fuld was murdered today in Gush Etzion. A soldier to the last he shot the Islamic terrorist that stabbed him in the back before succumbing to his wounds. pic.twitter.com/rWapRflwEr

My friend Ari Fuld (w/ me in photo) an American/Israeli patriot was murdered in cold blood today by young Palestinian terrorist who stabbed Ari IN THE BACK. Despite being stabbed, Ari chased and shot the coward, who lived. Ari died. I was with Ari in July in Efrat. #heartbroken pic.twitter.com/0ABH5wIK2r

Fuld moved to Israel in the early 1990s. He studied in a yeshiva and served in the Israeli army. He grew up in Riverdale, New York, and studied at SAR Jewish Day School there, where he father served as principal.

His childhood friend, Avi Abelow, moved to Israel at the same time. Both men settled in Efrat, a suburban community south of Jerusalem, with a large American émigré population. They lived on the same street, sat next to one another at synagogue every day, and raised their children together.

America grieves as one of its citizens was brutally murdered by a Palestinian terrorist. Ari Fuld was a passionate defender of Israel & an American patriot. He represented the best of both countries & will be deeply missed. May his family be comforted & his memory be blessed.

Both men also devoted their lives and careers to defending Israel against hostile media coverage on social media and other platforms. Fuld was about to embark on a world speaking tour when he was murdered.

Thanks for the messages. Really. Just looking for oxygen now…https://t.co/uupt1nQGIP

Speaking with apparent shock at the sudden loss of his closest friend, Abelow said Sunday afternoon, “Every day we sat next to each other at synagogue. Every day we’d talk about what we were doing to advocate for Israel. Ari was committed to what he referred to as ‘changing the narrative about Israel.’”

“He always called out the media for their lies. He emphasized always that the Jews are the indigenous people in this land. He had a meme he would post over and over again. It was a picture of the Western Wall and the Temple Mount with the Dome of the Rock Mosque above it. He circled the Western Wall and wrote that it was below the mosque because it was built first. The Jews were here first.

“Ari’s was a unique and big voice for Israel on social media. He had a very in-your-face style. He called people out as liars forcefully. He had live video feeds from Jerusalem’s Old City – virtual live video tours of the Old City. He also broadcast from Hebron. In Hebron, two weeks ago he went up to the TIPH volunteers [Temporary International Presence in Hebron] and got them to admit that they aren’t neutral.

“That personified who he was. He always went up to journalists and confronted them for their lies. He was such a fighter. And he died fighting like he lived. His name Ari means lion. And he was a Lion of Israel in every way.

“On a personal level, I just lost my best friend. He was my partner in what we are trying to do to get the truth out. It’s a huge loss on a family level. Our children are friends. Huge loss.