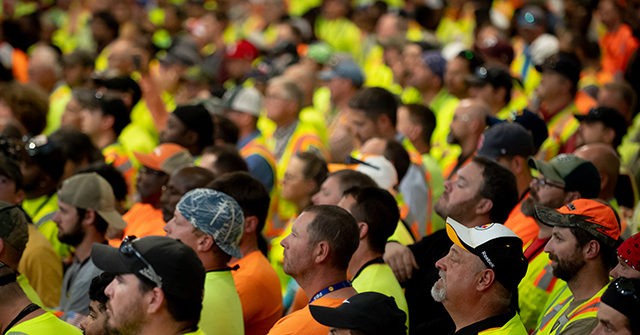 Democratic presidential nominee Joe Biden has repeatedly promised he would not ban fracking—a vital economic bulwark in the battleground state of Pennsylvania—if elected.

Even if he keeps his promise, however, Biden’s green energy plan would wipe out the fracking industry in Pennsylvania, costing hundreds of thousands of jobs and hundreds of billions of dollars of lost income.

Pennsylvania is home to the largest shale-gas field in the United States and the state produces more natural gas than any state apart from Texas. Energy companies have poured billions of dollars of investments into the state to get at that gas, creating hundreds of thousands of high-wage jobs and fueling a boom in the state’s economy and cushioning the blow from the Obama-Biden administration’s campaign against coal mining.

Natural gas is the nation’s dominant fuel source, central to the production of electricity in the U.S. That means that Pennsylvania is very much fueling the U.S. economy and as the economy expands and recovers from the pandemic-recession, pushing demand for power up, Pennsylvania stands to benefit.

Biden’s climate plan would derail the Pennsylvania natural gas business, uncoupling the state’s economy from U.S. economic progress. The candidate has promised massive investments in wind, solar, and battery storage with a goal of moving to a carbon-neutral power grid in just a few years.

This would push natural gas out of the power generation business altogether within 15 years—a crushing blow to Pennsylvania’s economy.

CLAIM: Joe Biden claimed in Pittsburgh, Pennsylvania: “I am not banning fracking.”

VERDICT: MOSTLY FALSE. Biden has promised to ban fracking — repeatedly — as has his running mate. https://t.co/CnXYzprPaT

“Decarbonization isn’t a debate — it’s a fossil-fuel death sentence,” said Kevin Book, managing director of ClearView Energy Partners, told Bloomberg News. “It means a resource is going off the grid. That is the inevitable implication.”

A study released last year by the U.S. Chamber of Commerce found that an outright ban on fracking would result in Pennsylvania losing over 600,000 jobs and $261 billion in gross domestic product by 2025,.  That is roughly one-third of Pennsylvania’s total GDP last year. The average Pennsylvania consumer would see his cost of living increase by $4,654, while total household income would fall by $114 billion, the study said.

The replacement of natural gas with ‘green’ fuels would move through the economy more slowly than an outright ban but would move in the same direction and ultimately have the same result. The massive subsidies for wind and solar Biden has promised would make natural gas uncompetitive as a fuel for power generation, encouraging utilities to abandon gas in favor of renewables. Environmental regulations would tighten limits on emissions by utilities, doubling down on the push toward solar and wind.

A Biden administration is also likely to make natural gas extraction more costly. Federal clean water laws could be used to stringently regulate fracking wastewater. Emissions from wells themselves will likely be restricted. And, in an effort to encourage the rest of the world to move toward renewables, a Biden administration could limit export licenses for natural gas, depriving Pennsylvania drillers of access to the world market.

The combination of easy money for renewables and tighter regulations for gas would be a lethal cocktail for Pennsylvania’s fracking industry.  Within a decade, the question of whether to ban fracking will be moot because there will not be a fracking business in Pennsylvania to ban.

Biden’s website appears to foresee the economic devastation its policies would visit upon fracking, promising that Biden’s agenda will create hundreds of thousands of new jobs “plugging abandoned oil and natural gas wells.”

Many of those abandoned gas wells would be in Pennsylvania in a Biden-Harris administration.