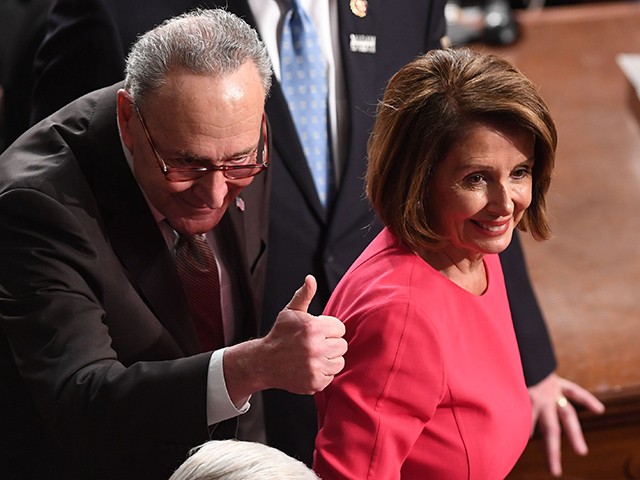 The California Congresswoman reclaimed the Speaker’s gavel this week after a campaign against her Democratic Party rivals and critics that was so terrifyingly and efficiently brutal that it even impressed Breitbart’s Matt Boyle. To those with a cinematic frame of mind it recalled The Godfather’s baptism of fire sequence depicting Michael Corleone relentlessly eliminating rivals for his family’s control of American organized crime.

As is now traditional when an opposition party seizes control of the House of Representatives, the Democrats promptly shut down the federal government. In fact, somehow the Democrats shut down the government even before formally taking control of the House. This was accomplished through the machinations of Chuck Schumer, the New Yorker who leads the Democratic minority in the U.S. Senate, nearly a week before Pelosi’s ascension, a timeline that Capitol Hill sources insist was in no way Schumer’s clever ploy to deprive Pelosi of the time-honored oppositional House majority leadership role of leading the shutdown enjoyed by Speakers Newt Gingrich in 1995 and 1996 and John Boehner in 2013.

The shutdowns of yore, however, were attended by a least some sense of national crisis. Not so the current shutdown. It has barely shown up as a blip on the radar screen of our public life. Netflix’s claims about the viewership of “Birdbox” garnered more attention and more controversy. Even the last shutdown, initiated by Schumer and Pelosi a year ago, at least had a pretense to consequence.

Down on Wall Street, no one appeared to notice the government had been mothballed. The drama of the week revolved around trade negotiations, Federal Reserve policy, and Apple falling far from the China tree. The market tanked, tanked again, and then tanked some more. But no one pretended the shutdown had entered into their calculation of the proper value of equity shares. And when the market rallied on Friday, thanks to the addition of 312,000 jobs in December and Jerome Powell seeming to retreat to a view of monetary policy much closer to that of Donald Trump and CNBC’s Jim Cramer, it only highlighted the irrelevancy of the shutdown.

Not that shutdowns have ever had a big impact on stocks.  If anything, stocks tend to rally by the end of shutdowns–although this may be simply a reflection that at any given point of time stocks tend to be higher than they were at most points in the past.

But they were at least shown some attention and deference. Wall Street analysts had to set out to reassure clients that shutdowns did not tend to produce anything bad for stocks. Brokers, back when we still called them that, had to entertain calls from clients worried about what it all meant. Mark Haines would interview men in ties and women in skirt suits and respectable pumps about what they thought the shutdown would mean for, say, the consumer discretionary sector.

Even the calm at least had the courtesy to greet the shutdown with a shrug.

Not this time. Conversations with financial advisers, as the brokers are now known, reveal that there has been no hue and cry from the heartland’s investors or retirees about the shutdown. Not even some concerned text messages. You would have had to watch CNBC in slow motion to catch a mention of the shutdown. And even as Pelosi and Schumer revealed that Trump had told them the shutdown could last for years, the market relentlessly rallied on Friday.

Pelosi’s first act as new Speaker, managing the shutdown for the House majority, was less than irrelevant on Wall Street in the first week of 2019. It was as if the thing that has consumed her first days in office were not happening at all.