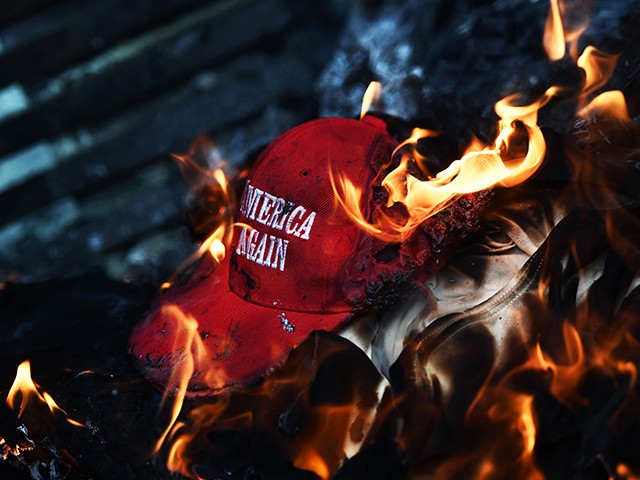 Several months of assaults, insults, and indignities against Trump supporters may have become an economic drag in September.

Retail sales for the month came in surprisingly weak, missing economist expectations despite a significant rebound in auto sales. One of the most startling results reported from the government’s report on Monday was that sales in bars and restaurants fell 1.8 percent during the month.

There is some evidence, albeit necessarily anecdotal in nature, that this is connected to leftwing anger directed at Donald Trump and his supporters.

“Why bother going out if you’re going to risk being turned away for wearing a Make America Great hat,” one Trump supporting New Yorker said.

In interviews, more than a dozen Trump supporters have said that they have cut down on eating out or visiting what the government calls “eating and drinking places” because of fear of harassment from protesters or restaurants themselves.

“Who wants to go out and eat while watching the left scream and dance?” a Breitbart commenter recently wrote.

“Go out to eat? Get attacked or watch somebody else get attacked by a leftist mob? I’ll pass on that,” another wrote. “I’ll cook it at home.”

The fears of harassment and violence are not unjustified. Sen. Ted Cruz and his wife were chased out of a Washington, D.C. restaurant by a mob of protesters in September. In June, leftwing activists harrassed Department of Homeland Security Secretary Kirstjen Nielsen out of a  D.C. restaurant. That same month, White House press secretary Sarah Sanders was refused service at a D.C. area restaurant.  Stephen Miller, a senior Trump adviser, was cursed out by a bartender after ordering take-out sushi. Senate Majority Leader Mitch McConnell was chased out of restaurants by protesters twice in July.

“Restaurants are no longer safe spaces for Trump allies,” Metro declared in a news story in July.

It is not just Trump administration officials and allied politicians who have been targeted. A Texas teen eating at a local burger joint was allegedly assaulted in July for wearing a MAGA hat. A New York bar refused service to a man in a pro-Trump hat–and a judge ruled the bar was legally entitled to do so.

There are no official statistics that would reveal whether this unprecedented level of political harassment is keeping Trump supporters at home. But it would explain some of the surprising weakness in the retail sales and conversations with many Trump supporters indicate a hesitancy to go out in this atmosphere.