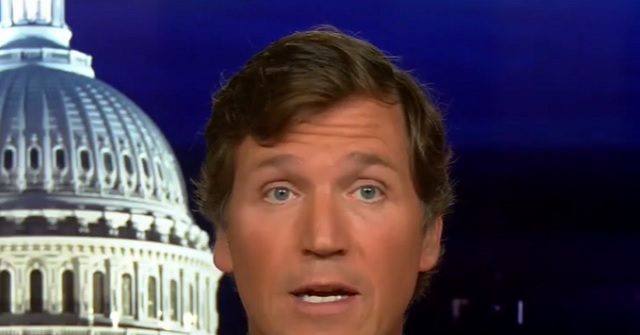 Friday, Fox News Channel’s Tucker Carlson highlighted the reactions from the media and Democrats to President Donald Trump’s positive coronavirus test, which in some cases was used to criticize Trump for his handling of COVID-19.

According to the Fox News host, the tactic showed a willingness to criticize others infected with COVID-19 if it equates gaining political power.

CARLSON: Over at CNN, however, we are told again and again that the President deserved the sickness that he got and they trotted out the usual hacks to explain why he deserved it.

JOHN HARWOOD, CNN WHITE HOUSE CORRESPONDENT: A lot of people have been put in jeopardy by the President’s behavior, and now we have learned, of course, this morning that one of those people is the President himself.

DANA BASH, CNN CHIEF POLITICAL CORRESPONDENT: But he just couldn’t get over the fact that in his mind, the mask equals weakness equals I’m not on top of this virus.

JOE JOHNS, CNN SENIOR WASHINGTON CORRESPONDENT: So perhaps a bit of a shock this morning for Americans, but not necessarily a surprise.

HARWOOD: It is also the most vivid possible demonstration of the incompetence and the irresponsibility of the administration.

DON LEMON, CNN ANCHOR: In large part, it is his own their dereliction is partly to blame for this. He chose to go out to rallies.

CARLSON: Imagine. He just announced he was infected. He just got to Walter Reed. He deserved it. They didn’t wait long.

Of course millions of Americans had been diagnosed with the coronavirus. Probably people you know, probably people in your family. We can say that. Hundreds of thousands have died.

CNN’s expert panelists are saying, they all deserved it. They must have been. They were careless. They were derelict in their duties.

If there was a lesson from the coverage of this, it’s a very familiar lesson. The media class is willing to attack the rest of the country if they think it will hurt the President they despise it. If they think it will give them more political power.

And of course, it wasn’t just the media. In fact, the official message of the Democratic Party is the Donald Trump had it coming.

REP. NANCY PELOSI (D-CA): We all receive that news with great sadness. I always pray for the President and his family that they are safe. I continue to do so more intensified.

This is tragic. It’s very sad. But it also is something that again, going into crowds, unmasked and all the rest was sort of a brazen invitation for something like this to happen.

CARLSON: Raised an invitation. He asked for it. He was dressed provocatively. That’s what Nancy Pelosi just told you. Many other Democrats are echoing that sentiment.