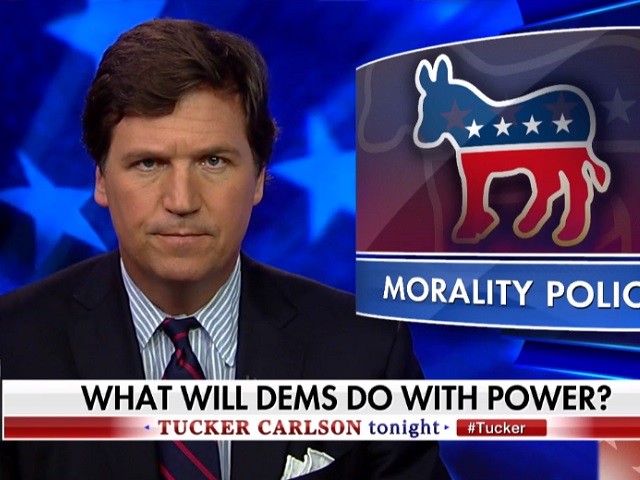 Monday on “Tucker Carlson Tonight,” host Tucker Carlson examined the Democratic Party’s so-called “moral revival,” one of the themes it has employed in recent days to attack President Donald Trump.

Carlson argued Democrats had their own issues with morality and weren’t in the best position to make such criticisms.

CARLSON: Democrats just retook control of the House of Representatives after eight years, and the rest of us are waiting to see what they will do with their new political power. We know the Democrats despise the President. They’ve mentioned that. But what are they for? What’s their organizing principle?

If you imagine something simple and straightforward like lower prescription drug prices or more transgender Marines, think again. Their mission is bigger than that. In fact, it’s more metaphysical than it is political. The Democrats are planning nothing less than the moral revival of this country. Listen to their leaders.

JOE BIDEN, FORMER VICE PRESIDENT OF THE UNITED STATES: That invisible moral fabric is being shredded, I mean literally being shredded.

SHEILA JACKSON LEE, U.S. REPRESENTATIVE FOR TEXAS’S 18TH CONGRESSIONAL DISTRICT, DEMOCRATIC PARTY MEMBER: I knew that the good people of Texas would rise up and find their moral compass.

BILL NELSON, SENIOR UNITED STATES SENATOR FROM FLORIDA: Ridiculous policy that has offended the morality of the American people.

RICHARD BLUMENTHAL, UNITED STATES SENATOR, CONNECTICUT: If my Republican colleagues have any sense of morality, they will refuse to go forward on Friday.

CARLSON: Senator Richard Blumenthal of Connecticut. That’s right. The party of sex-selective abortion is now lecturing you about morality. And, frankly, you’re coming up a little short in that department.

You don’t measure up to the high moral standards of, say, Senator Kirsten Gillibrand of New York, a longtime friend and defender of Bill Clinton, Harvey Weinstein, and Anthony Weiner. Gillibrand has recently been reborn as a fire-breathing fundamentalist preacher. Here’s a selection from a few of her sermons over just the past week.

KIRSTEN ELIZABETH GILLIBRAND, JUNIOR UNITED STATES SENATOR, NEW YORK: This country was founded on some basic moral principles that we have a moral compass as a nation.

Our morality as a country is literally on a knife’s edge.

For me, it’s really a moral question.

For me, it’s very much a moral question.

I’ve been called to fight as hard as I possibly can to restore that moral integrity that moral decency.

CARLSON: For me, it’s a moral question. Keep in mind the hand gesture. Keep in mind also that Senator Gillibrand isn’t just fighting for moral integrity and moral decency. She says she has been called to fight for these things.

You know who called her? Don’t you. It wasn’t her friend, Anthony Weiner, from a prison payphone. Nope, it was God himself. He called Senator Gillibrand directly. He’s got her cell. That’s how close they are.

Remember when Democrats used to say they’re worried about a theocracy? Who knew they’d try to start their own?