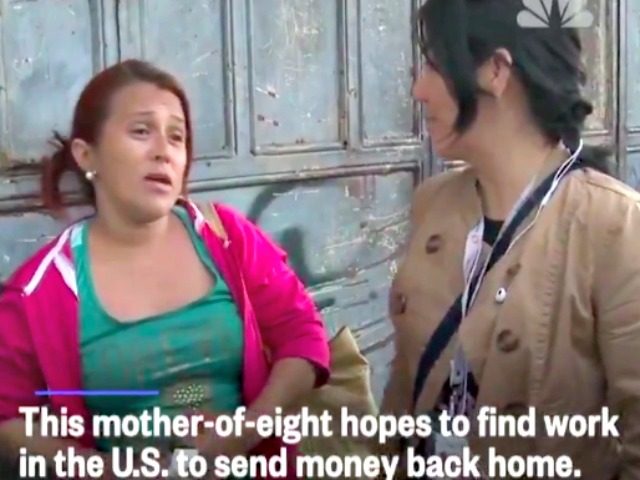 Migrants traveling with the 7,000-strong caravan headed to the U.S.-Mexico border to overwhelm the country’s asylum and immigration system are admitting that they are merely foreign workers looking for jobs.

Migrants with the caravan — many of whom are previously deported illegal aliens — recently admitted to the Washington Post in interviews that they are economic migrants, not asylum-seekers.

Evin Mata, a 21-year-old previously deported illegal alien, told the Post that his travels with the caravan to the southern border are about getting a U.S. job, which is not an eligible claim for asylum.

“We are workers,” Mata said. “What are we supposed to do in Honduras if there’s no work?”

Another previously deported illegal alien with the migrant caravan, Job Reyes, told the Post that his looking to get back into the U.S. — like Mata’s — was about securing a job, not asylum.

“I don’t know what they expect about us,” Reyes said. “But basically what we want is to have a better opportunity, to have a job, you know?”

Migrants with the caravan interviewed by NBC News similarly admitted that their goal in marching through the country’s southern border was to look for jobs, as Breitbart News reported.

NBC News admitted in their report on the migrant that “She hopes to reach the U.S. and find work to send money back home.”

Several thousand Honduran migrants moved this week through Guatemala, many heading to shelters in Guatemala City for food and rest before they continue on their journeys.

Among them is Karen Aviles. She hopes to reach the U.S. and find work to send money back home. pic.twitter.com/UjC0mK7hx5

Breitbart Texas reported that the migrant caravan stormed through Mexico last week, tearing down a border barrier in the process as they cross from Guatemala to Mexico.