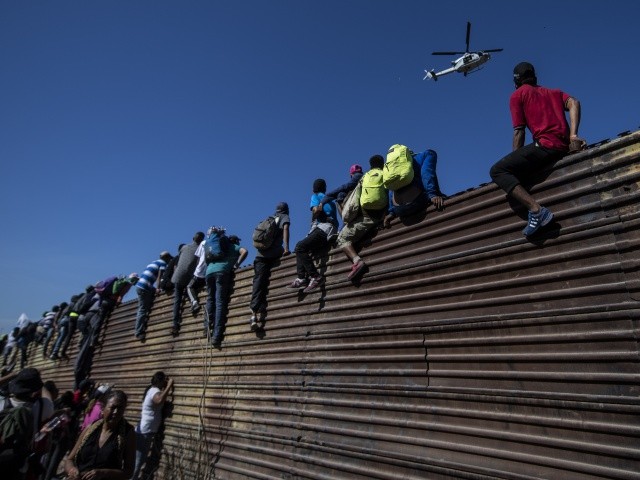 Migrants with a caravan of between 7,000 to 10,000 Central Americans are frustrated with United States border enforcement, telling media crews that they are growing impatient as they wait in Mexico.

In multiple reports, caravan migrants say they want quick and easy access to the U.S. Though the caravan migrants in Tijuana, Mexico are being offered jobs, many are refusing the work, saying they want to cross the border eventually and find jobs in the U.S. — an ineligible asylum claim.

One of the caravan migrants told the New York Times of her disdain for U.S. border enforcement:

“Once we got here, we realized that they weren’t going to let us cross,” Leticia Ramírez, 35, who said she worked on banana plantations in Honduras, complained as she walked out of the shelter one morning this week with two friends. She was on her way to look for “any job” in Tijuana. [Emphasis added]

“The president of the United States treats us like garbage, like some kind of animal,” Ms. Ramírez said, her arms wrapped around her sleeping bag. [Emphasis added]

In interviews and murals painted by the caravan migrants, they readily admit that they are not eligible asylum-seekers and that they are merely looking for jobs in the U.S. A mural captured by RT shows an American flag with the words “We don’t come to brake the laws, we come for jobs” painted by the migrants.

The caravan migrants told the German broadcaster DW that they want the U.S. to let them cross into the country:

On Thursday, Jose Rodriguez, his companions and their flags reach El Chaparral in Tijuana, the main border point from Tijuana, Mexico, into the US. That day, 300 migrants are camped here, demanding that US authorities accept their requests for asylum. “We can’t wait any longer,” the migrants shout, “let us cross.” [Emphasis added]

In interviews by ABC 13‘s Art Rascon, caravan migrants say they are aggravated that they are being forced to wait in Tijuana, Mexico rather than forcefully crossing the U.S.-Mexico border.

“I lost my patience long ago,” a caravan migrant tells Rascon in Spanish.

One of the caravan migrants, 24-year-old Josue Caseres, told the Associated Press in an interview that he and the thousands of other Central Americans “are fleeing violence.” Fleeing violence, gangs, and looking for work are not eligible claims for asylum in the U.S.

Last week, Breitbart News reported how caravan migrants in Tijuana began scaling the U.S.-Mexico border fence. In response, the Department of Homeland Security (DHS) has placed razor wire along the fence. Only a little more than 20 miles of the U.S.-Mexico border has been reinforced with the razor fencing as Trump’s proposed southern border wall remains unstarted.