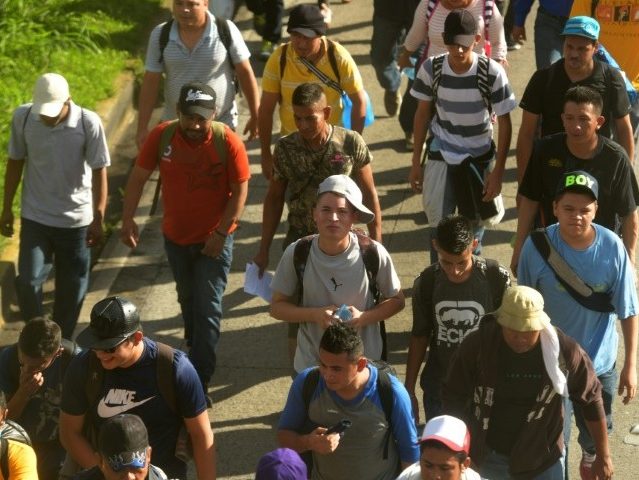 El Salvador nationals traveling with an at least 7,000-strong migrant caravan which is headed to the United States are detailing crime and poverty as their reasons for fleeing the country, both of which are ineligible asylum claims.

El Salvadorans with the caravan, the Associated Press admits, are traveling through Mexico to the U.S. to escape gangs, crime, and poverty — none of which are eligible asylum claims:

A quarter of young Salvadorans who flee do so because they are threatened with or fear violence. Young women are pressured to be “girlfriends” of gang members and face rape or murder if they refuse, while young men are pressured to join the gangs or risk death if they don’t. Two out of three Salvadorans never attend high school. [Emphasis added]

The International Organization for Migration says most Salvadorans migrate for economic reasons. Per capita income is $324 a month and nearly one in three Salvadorans lives in poverty, according to the World Bank, defined as less than $5.50 a day. [Emphasis added]

Allowing such claims by foreign nationals would give the entire population of Central America — about 32 million people — the right to migrate to the U.S. as the region is rife with gang violence and crime.

32M Central Americans Would Have Right to Migrate to U.S. Under Asylum Plan by Dems, GOPhttps://t.co/Omq9i0wvvD

As Breitbart News has chronicled, migrants with the caravan have repeatedly admitted that they are traveling to the U.S. to seek jobs, re-enter the U.S. as previously deported illegal aliens, and flee crime. None of these cases are eligible asylum claims.