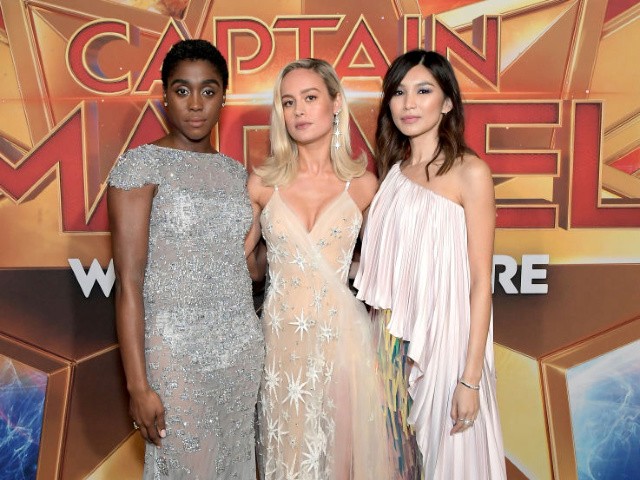 The star of Captain Marvel, the comic company’s first film starring a female lead, has proclaimed the film to be about “intersectional feminism.”

The Marvel universe of superhero films has leaped squarely into the world of politics as Captain Marvel star, Brie Larson, exclaims that a key relationship in the film is all about feminism.

According to Entertainment Weekly, the new Captain Marvel will be about “intergalactic odd couple Brie Larson and Samuel L. Jackson” who “return to 1995 to fight aliens.” But according to its star, the heroes also line up to fight sexism.

In the EW interview, Larson responded to a question about her character’s relationship with Monica Rambeau, played by actress Lashana Lynch, and Larson replied that the whole point was to portray “intersectional feminism”:

I think because it’s 2019, and what 2019 is about, really, is intersectional feminism. There’s just no question that we would have to show what it means to be all different kinds of women, that we don’t just have one type. It became a great opportunity, even with things like the love story. [We wanted] to make that big love— that lost love, that love that’s found again—be with [Carol’s] best friend. To show that, that’s incredibly powerful and gripping, and you could go to the ends of the Earth and fight till the end for your best friend. It’s perfect to me and so meaningful. To me, that’s a part of what the meditation of this movie is: It’s female strength, but what is female strength? What are the different ways that can look?

For her part, Lynch had another idea about what her Rambeau character represented.

In an interview with Nerdist, Lynch celebrated her character’s single motherhood as a beau ideal.

“Her being a fighter pilot along with a single mother is her superhero quality,” Lynch told Nerdist. “That is absolutely her superpower. Being a single mother, especially a Black single mother, having been raised by one and my grandmother, I know that there’s just a certain type of strength that comes ancestrally.”

Meanwhile, a fight is brewing among critics who seem to have watched two different films.

A compilation of reviews published by EW reveals some critics saying that Captain Marvel is a “mundane” film “marked by unimaginative plotting,” a “generic” superhero film, a film that does not “approach the ranks of top tier Marvel movies,” or a grim film where no one seems to be having much fun. But other critics who focus solely on the feminism of the film want to proclaim Captain Marvel a success based only on that feminist metric.

Actor James Woods spoke to the controversy by noting that maybe America should “pick a movie where the studio doesn’t hate half its audience.”

When you have a choice, pick a movie where the studio doesn’t hate half its audience… pic.twitter.com/69I3QuCxt3