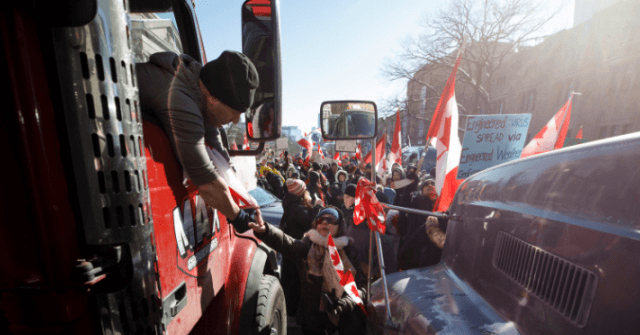 Truckers in the Canadian Freedom Convoy are lauding the efforts of their fellow citizens and protesters on the ground in Ottawa, who are helping with food, gas, and rides.

Fox News’s John Michael Raasch has been in Ottawa covering the protest and caught up with a few truckers who detailed the tremendous support they are receiving from their fellow citizens.

One trucker named Mat says he has never been prouder to be a Canadian.

“There’s been so many people coming up to us and shaking our hands and helping us with food and drinks and whatnot,” he explained to Fox News.

“The support has been incredible,” he added. “I’ve never seen anything like it. I’ve never been more proud to be Canadian.”

Another trucker, Travis of New Brunswick, spoke regarding the outpouring of assistance.

“There’s people knocking on my door every five minutes wanting to give,” he told Fox News. “There has been nothing but caring, sharing and giving.”

“Do you see how caring these people are? That’s Canada. That is Canada. Let us be Canada again,” Travis explained.

Andrew, a third trucker, detailed that supporters offer him money, but he refuses.

Breitbart News’s Robert Kraychik spoke with one man named Dave, who is supporting the Freedom Convoy. He said he traveled from Montreal to Ottawa and told Breitbart News he had been there since January 28.

“He was volunteering working a makeshift kiosk serving hot coffee and chocolate, tea, soups, and other food and drink provided by donations to trucker demonstrators and other protesters near Parliament Hill,” Kraychik reports.

“We’ve been known worldwide to be too sorry for stuff, and I’m tired of being sorry,” Dave told Breitbart News.

Two college students, Nathan Savoy and Dylan Gordon, told Fox News that they set up a table with water boilers to pass out tea and coffee, according to Fox News. As the days went on, the contents of their table expanded to include food, clothes, and more goods.

I’m in #Ottawa and just spoke to two students who have been giving out food and supplies to anyone who asks at the #TruckersConvoy2022. They told me they declined offers to go snowmobiling because they wanted to be apart of this “historic moment.” pic.twitter.com/oAruu69E7l

“Anyone who is hungry is being fed,” Savoy said.

Savoy noted that people had been coming to the table and filling backpacks with supplies. Other supporters drop off supplies at the table for redistribution, and over the days, thousands of dollars worth of goods have been donated and distributed.

“Honestly, it feels like it’s coming out of nowhere,” Gordon told Fox News. “Every morning, when we’ve been showing up the last five days, there’s been more and more food just showing up at our table, even when there’s no one even behind it.”

“We’ve had plenty of homeless people come by our table and just filled their bags with as much food as they could carry,” said Gordon. “Plenty of locals come by who have had their jobs hurt by this protest.”

Supporters are finding other ways to help as well.

Two men, one of whom is named Matt, set out to play street hockey, but instead, they spent time fueling trucks to keep the Freedom Convoy going.

Two gentleman help refill a truck that is directly in front of the Parliament building in #Ottawa. They told me they came to play street hockey, but instead, “We saw there was a need for fueling trucks so that’s what we’re doing .” #TruckersForFreedom2022 pic.twitter.com/h79OPG01Cb

“Well, we’re just out here helping fuel up the trucks, keep the drivers happy, anything they need, we’re trying to take care of them,” Mark told Fox News. “They’re fighting for our freedom, so we’ve got to fight for what they need.”

One woman named Laura told Fox News she has been driving truckers from trucks to hotel rooms and vice versa.

“I’ve been bringing about one to four guys back and forth, bringing them there in the night to catch up sleep, shower, bring them back for the day,” she said.

The scene in Ottawa has left Mark with an overwhelming sense of Canadian pride.

“We are coming together, looking, looking after each other, joining arms as Canadians,” he told Fox News. “I’ve never felt this sense of pride as a Canadian in my life before.”