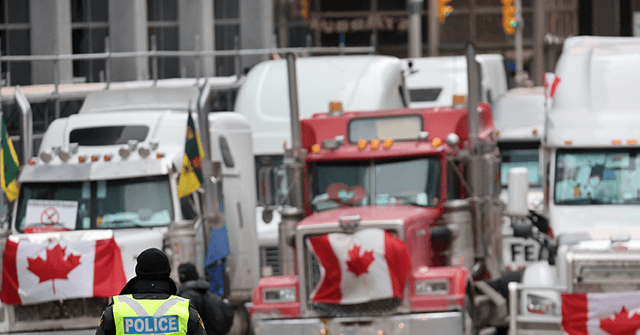 Freedom Convoy protesters voluntarily dismantled their blockade of the Coutts border crossing in Alberta province Tuesday, the day after Royal Canadian Mounted Police (RCMP) seized a cache of weapons in a morning raid, and Premier Jason Kenney asked protesters to go home before the blockade escalated into violence.

Police officers hugged the demonstrators and shook their hands as they made preparations to depart Tuesday:

Coutts police honors, greets and hugs truckers who have blocked the US – Canada border for 18 consecutive days. pic.twitter.com/RL4F7l0JBh

RCMP Deputy Commissioner Curtis Zablocki said he was aware of the hugging videos spreading across social media, and evidently did not condone the behavior of his officers.

“I will say, we do encourage our members to engage with the public and develop respectful, professional relationships with all Albertans. We will be looking further into this matter and taking any necessary steps,” he said.

The RCMP staged a raid at the Coutts border crossing on Monday after investigators said a “heavily armed group” was present among the demonstrators and was plotting “serious criminal activity,” including “conspiracy to attempt to commit murder.”

The raid resulted in 13 arrests, plus the seizure of “13 long guns, handguns, a machete, a large quantity of ammunition and body armor” plus two more unidentified weapons seized later in the day, according to the National Post.

Photo of items seized as a result of last night’s search warrants at the Coutts border blockade. https://t.co/Rve2jtvVX0 pic.twitter.com/3szbXlKrJl

The Mounties also said a farm tractor and a semi truck attempted to ram a police vehicle on Sunday, an incident they described as illustrating “the militant mindset of a small segment of the protest.”

Protest organizers said they had no knowledge of the group described by the RCMP.

“We were infiltrated by an extreme element,” organizer Marco van Huigenbos said Tuesday morning. “Our objective was to be here peacefully. To keep that message going, we want to peacefully leave Coutts and return to our families.”

“We’re not walking away with everything we came for, but there was definitely some huge wins,” van Huigenbos said, referring to pandemic restrictions being lifted across Alberta.

“Now that the RCMP has successfully resolved this potential threat, they will proceed, I’m informed, with enforcement against others who are involved in the blockade,” Kenney said after the protesters began departing from Coutts.

Glad to see that almost all protestors at the Coutts border crossing and nearby checkpoints have now gone home.

This is great news for the hundreds of truckers who cross the border every day.

Kenney said the impact of the border blockade on Alberta’s economy “has been quite modest,” but “the inconvenience has been very great.” He insisted the lifting of pandemic restrictions had nothing to do with the protest movement, despite the claim of victory by van Huigenbos.

The premier even offered a suggestion for how protesters could refocus their energy.

“You’ve got the NDP’s Alberta Federation of Labor in court as we speak, trying to get a judge to force six-year-olds to wear masks indefinitely. If you want to protest something, go down to the AFL headquarters and protest that – peacefully,” Kenney suggested.

This was not taken well by the AFL, which said it would file a police complaint against Kenney for allegedly inciting violence against the organization, and sent its staff home early on Monday out of concerns for their safety.

“What the premier has done is basically said go after the Alberta Federation of Labor — so we take that as a threat. He crossed the line,” said AFL President Gil McGowan, adding that Kenney’s clear reference to peaceful protests was merely a “fig leaf.”