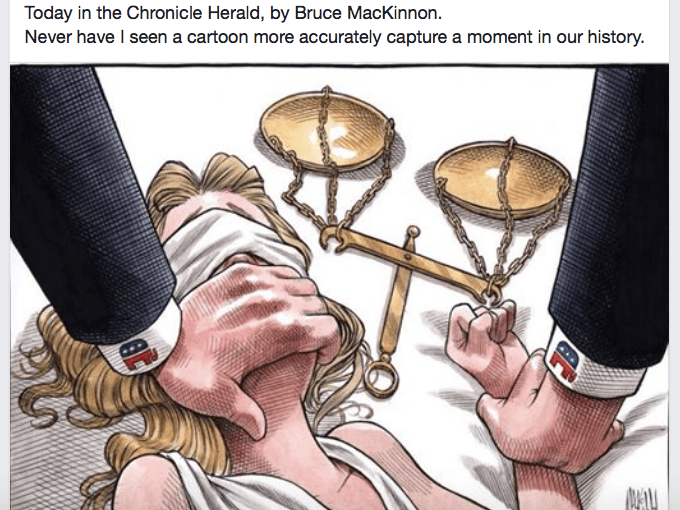 The cartoon shows the arms of a man wearing a suit with GOP elephants on the cuffs of his white shirt pinning Lady Justice to a bed, with one hand on her wrist and another on her mouth, as the scales of justice lie behind her.

The image appears to depict what Christine Blasey Ford alleges that Judge Brett Kavanaugh did to her over 35 years ago at a high school party.

Opponents of Kavanaugh circulated the image widely on social media. The Washington Post celebrated the cartoon: “Perhaps no illustration of [Lady Justice] during this administration, though, has resonated as strongly as the new cartoon by Bruce MacKinnon, as published this weekend in the Halifax Chronicle-Herald.”

One Facebook user wrote: “Never have I seen a cartoon more accurately capture a moment in our history.”

Other comments were similarly appreciative:

Every hair on my body stood straight up at this cartoon from @chronicleherald pic.twitter.com/IFPda85rK1

THIS editorial cartoon by @CH_Cartoon made me feel ashamed, embarrassed & mindful of how pivotal a moment in time this is.#MeToo⁠⁠ #KavanaughHearings #KavanaughFordHearing #politics

Those enthusiastically sharing the cartoon were not commenting on the Democratic Party’s suspension of the presumption of innocence for the accused, but rather the Republican Party’s attempt to confirm Judge Kavanaugh to the U.S. Supreme Court despite Ford’s allegations (none of which have been corroborated by any other evidence, and which have been contradicted by every witness she has named.)