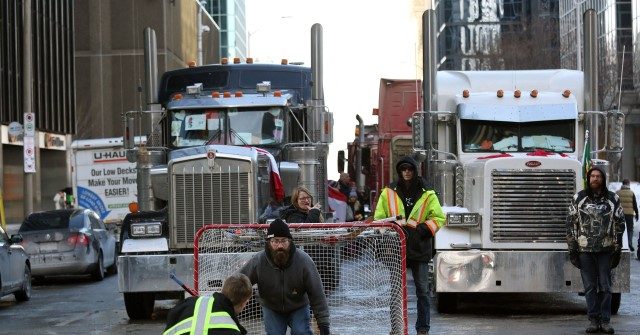 Canadian truckers plan to continue protesting coronavirus restrictions leveled by their government, despite attempts by public officials to disrupt them.

“Our biggest tool for change is patience. We got all the time in the world,” B.J. Dichter, the spokesman and vice president of the Canadian “Freedom Convoy” protests told Breitbart News Daily host and Editor-in-Chief Alex Marlow in an interview on Sirius-XM Patriot.

He reminded Canadian government officials that truckers were used to sitting and waiting as part of their jobs, and they would not blink.

Truckers, Dichter said, were seeking two things from their government: an end to the mandated vaccines and an end to the coronavirus passport required for truckers reentering Canada. He expressed surprise and disgust that government leaders refused even to talk to the protesters or discuss their demands.

“That’s not how our system works,” he said, referring to democracy in Canada. “They serve the people. Not the other way around. I think they’re going to learn this harsh lesson and that’s going to take a little while.”

Despite their polite reputation, Dichter said Canadians ultimately lost their patience with their government leveling more and more restrictions and refusing to walk them back.

Dichter said the protests are wildly successful, revealing that Canadians across the country are acting independently to push back against their government.

“Most of society has been locked in their homes and had their freedoms stripped from them for two years, that’s why it was so easy to motivate people to get out and do something,” he said.

He noted that people of both the right and left political ideologies had joined the cause.

“We may have differences in life philosophy but at the end of the day, we all want freedom, and that’s being taken away by the political class itself, and it’s not acceptable,” he said.