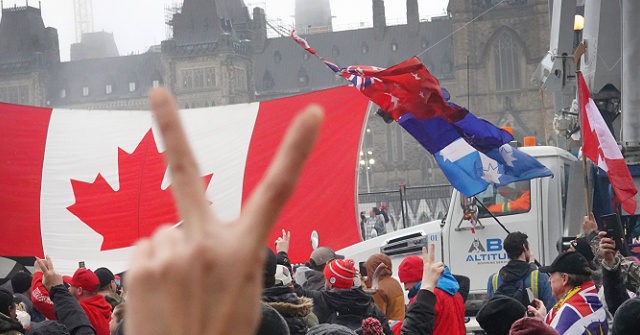 Chris Barber, one of the top organizers of the Canadian Freedom Convoy protests that have rocked Ottawa in recent weeks, has been arrested and will likely face criminal charges.

Barber’s arrest comes after he was named in a “class action lawsuit filed with the Ontario Superior Court of Justice by lawyer Paul Champ on behalf of his client, 21-year-old public servant Zexi Li,” according to the CBC. Fellow convoy organizers Tamara Lich and Benjamin Dichter were also named in the lawsuit.

Barber previously scolded Canadian politicians for calling the protesters names like racists and terrorists instead of engaging in productive dialogue.

“We understand your frustration and genuinely wish there was another way for us to get our message across, but the responsibility for your inconvenience lies squarely on the shoulders of politicians who have to vilify and call us names rather than engage in respectful, serious dialogue,” he said.

BREAKING: Freedom Convoy protest organizer Chris Barber got arrested in Ottawa as he was walking down the street. https://t.co/oFSoJ2ez4I pic.twitter.com/6Itq8ypRKR

Barber’s arrest comes after Canadian Prime Minister Justin Trudeau evoked emergency powers to quell the protests that have crippled the country in recent weeks in defiance of the government’s vaccine mandates. Among the many measures that Trudeau’s government would be taking, people who participate or donate to the protest could have their bank accounts frozen.

“The insurance on your vehicle will be suspended,” she added. “Send your semi-trailers home, the Canadian economy needs them to be doing legitimate work, not to be illegally making us all poor.”

On Wednesday, Trudeau’s Justice Minister David Lametti made a chilling claim when he said that Trump supporters “oughta be worried” about having their bank accounts frozen.

“I think if you are a member of a pro-Trump movement who’s donating hundreds of thousands of dollars and millions of dollars to this kind of thing, they oughta be worried,” Lametti said on the CBC.

SHOCK: Trudeau’s justice minister says that being “pro-Trump” is a factor that will decide if your bank account is seized under their Emergency Orders. https://t.co/Ez5GPgvup1

As Breitbart News reported on Thursday, Canadian police have said they will be sending the names of truckers to the banks.

“Canadian banks will receive the names of people involved in ‘Freedom Convoy’ protests that have descended on the nation’s capital, a first step in a promised financial crackdown on demonstrators being instituted by the far-left government of Justin Trudeau,” said the report.

Deputy PM Chrystia Freeland: “The names of both individuals and entities as well as crypto wallets have been shared by the RCMP with financial institutions and accounts have been frozen and more accounts will be frozen.” pic.twitter.com/iA69DbRJl1