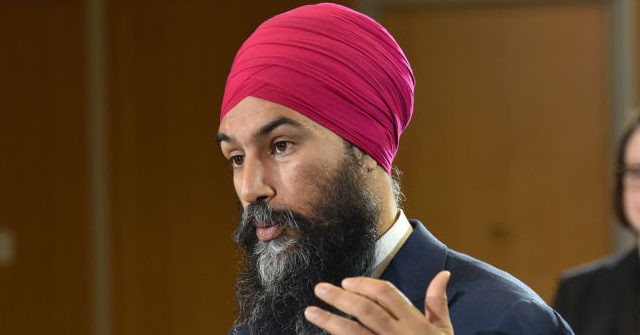 “It’s no secret that the convoy stated their mission, which was to overthrow the government,” Singh said during his turn to speak. “It sounds ludicrous, but they brazenly posted that on their website, and they reiterated it … as recently as earlier this week at their press conference.”

“The interim leader of the Conservative Party says, ‘We have heard you, we will keep standing up for you.’ Do you regret endorsing a convoy that is attacking the fundamental democracy of our country? Do you regret endorsing and supporting an occupation that has harassed citizens?” he said to Bergen, who became the interim Conservative leader this month.

“Obviously, nobody in this House believes that a government should be overthrown – although I have seen that member’s colleagues at a number of pro-communist marches,” Bergen responded.

“And the party that will have stood with that Prime Minister is that member and his NDP colleagues, and it’s shameful,” Bergen concluded, pointing at Singh.

Bergen did not specify which NDP members or pro-Communist marches she was referring to. The Canadian left is, at the very least, not exactly brimming with staunch opponents of communism. For example, Singh was effusive with praise for Cuban Communist dictator Fidel Castro on the occasion of his death in 2016:

He saw a country wracked by poverty, illiteracy & disease. So he lead a revolution that uplifted the lives of millions. RIP #FidelCastro pic.twitter.com/Ib6O0Zrtxv

Prime Minister Justin Trudeau caused a stir by expressing his admiration for the genocidal communist dictatorship of China in 2013, an attitude reflected in comments from officials in his administration after he became prime minister in 2015, although their praise for China tapered off noticeably after the regime in Beijing took Canadians hostage to pressure Canada into releasing corporate executive and Communist Party royalty Meng Wanzhou.

“There’s a level of admiration I actually have for China. Their basic dictatorship is actually allowing them to turn their economy around on a dime and say, ‘We need to go green, we want to start investing in solar,’” Trudeau gushed in 2013, prompting members of Canada’s Asian community to demand an apology.