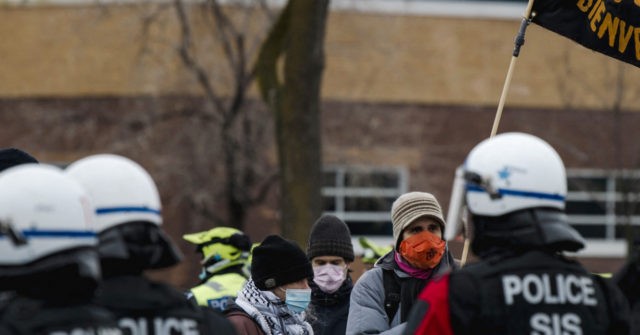 Marikym Gaudreault, a spokesperson for Montreal’s executive committee, stated that there was concern among the local government over police wearing the symbol, which contains a thin blue line through a black and white Canadian flag.

“We certainly have a discomfort with this symbol, which divides the population,” Gaudreault said and added, ” Currently, the SPVM (City of Montreal police service) is conducting a complete review of the standards applicable to police uniforms. An ethics committee is looking specifically at this issue. It is important that the entire population can have confidence in its police service,” the Toronto Sun reports.

The police spotted wearing the thin blue line symbol were at a protest last weekend supporting the Freedom Convoy truck movement which advocates for an end to Wuhan coronavirus restrictions, vaccine mandates and vaccine passports.

The middle school student wore a pro-police Thin Blue Line mask to school. And then this happened… https://t.co/4H52q1aKzZ

“The police boxed us in really tightly,” counter-protest organiser Leila Marshy said and added, “The police would not let any of us leave. People were allowed to come and go all around us if they were joining the convoy (supporters). But we weren’t allowed to step out. It was astonishing. Quite a few of the officers had thin-blue-line badges.”

Marshy went on to claim that the wearing of the symbols violated a section of the Quebec Police Act regarding alterations to uniforms.

“So the fact they are wearing it means there is a tacit allowance of that within the police force, … and it tells us the police are clearly going to pick and choose who they are going to defend and who they will aggress. So we were the targets of their aggression, and the convoy supporters were the ones being defended,” she said.

The Thin Blue Line symbol has been seen more frequently in the United States, where some have claimed the symbol is “racist.”

Livermore city council in the state of California deemed the symbol to be racist in late 2020, leading to local sheriff Greg Ahern commenting, “The thin blue line actually stands for the line between justice and injustice and evil and righteousness.”

Some students in American schools have also displayed the symbol to show their support of police and have been reprimanded by school authorities for it.

Earlier this month, a California middle school student, whose father works in law enforcement, claimed a teacher confronted him over the symbol, which was on his facemask.

Video of the incident showed the teacher compare the symbol to the confederate flag, saying, “That’s not the American flag that’s the new confederacy flag.”