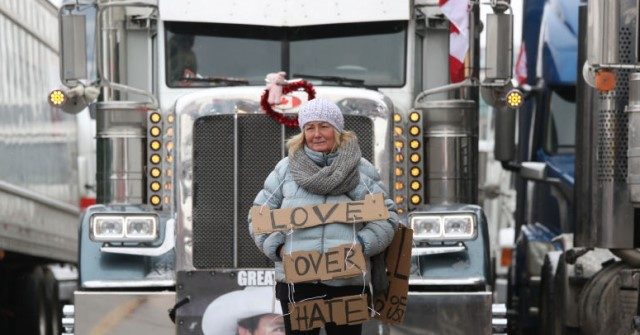 The Canadian province of Saskatchewan will soon end its coronavirus vaccine passport and mask requirements as anti-mandate protests continue to grow across the country.

Starting Monday, Saskatchewan will no longer require COVID-19 vaccine passports. It is also ending its indoor mask mandate at the end of the month. Premier Scott Moe said Tuesday that providing proof of vaccination against COVID-19 to enter businesses like restaurants had helped in the fight against spread of the virus. […] The province recently shifted to treating COVID-19 like a common respiratory virus.

“The benefits of this policy no longer outweighs the costs,” Moe stated during a press conference.

“This government is going to respect that right,” he added.

The development comes as the “Freedom Truck Convoy” continues to protest in the Canadian capital of Ottawa and other major cities around the country. Protesters are refusing to leave parts of the city, including areas near Parliament Hill, until Prime Minister Justin Trudeau reverses federal coronavirus mandates. Trudeau, who previously fled to a secret location as protesters descended upon Ottawa, has accused the truckers of displaying “disrespect to science” and advocating “hate, abuse and racism.” The country’s corporate media has echoed the prime minister’s claims.

During interviews with Breitbart News, protesters of different backgrounds disputed such rhetoric.

“The reason I’m out here is because I see a lot of the stuff on social media, and then we see obviously an alternative reality on the corporate media. I had to come see it for myself,” he said.

“I was born in another country,” he added. “I was born in South America. I immigrated here with my family, so, I like to think that I’m far from ‘white supremacy.’”