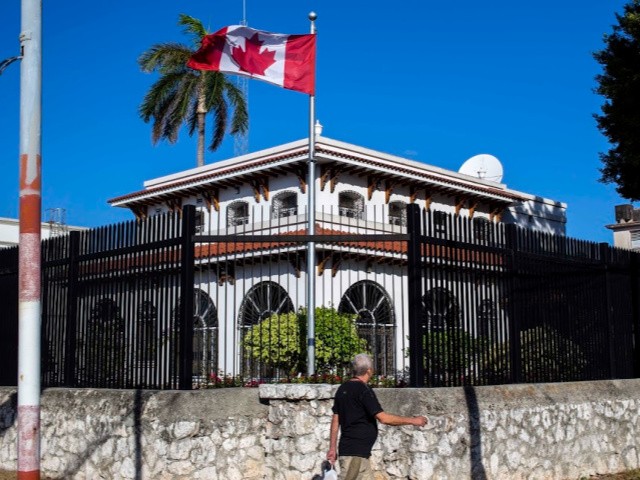 The government of Canada announced on Wednesday that it would cut its diplomatic presence in Cuba in half after documenting a new case of unexplained brain trauma in an embassy worker, a move that the communist regime responded to with hostility.

Canada has now confirmed 14 cases of individuals working at its Havana embassy who have reported unexplained brain injuries leaving them with “concussion-like” symptoms, including mobility and hearing issues, fatigue, and impaired cognitive abilities. Medical experts studying the Canadians have stated they believe the victims are suffering from legitimate physical brain injury and not a psychosomatic phenomenon.

In addition to the Canadian diplomats, 26 Americans working at the embassy in Havana and one working at a U.S. consulate in Shanghai, China, have suffered a similar fate. Doctors have failed to definitively conclude the source of the injuries, though all who have studied the patients first-hand agree that they present verifiable physical damage.

The Cuban communist regime’s official stance is that those diagnosed with the symptoms are victims of mass hysteria triggered by cricket and cicada noises, which the Cubans claimed Americans are too unfamiliar with to identify. Initial reports of the attacks in 2016 referred to them as “sonic” in nature because those affected reported strange screeching noises in their residences before suffering physical symptoms.

Citing the Canadian Global Affairs office’s statement on the diplomatic withdrawal, the Cuban independent outlet 14 y medio reported that the 14th affected embassy worker came forward with symptoms on December 29 and has since received treatment. The announcement Wednesday was a result of an investigation that concluded the person’s symptoms were consistent with what the other 13 victims suffered. Ottawa officials have not released any details on the identity of those involved, citing medical privacy issues; the United States has consistently done the same with its cases. They have also not specified whether the latest victim is a diplomat or worked at the embassy in another capacity.

The staff reduction will leave only eight diplomats working at the Canadian embassy.

The United States and the Castro regime, which has been known to possess acoustic torture mechanisms since the 1970s, have long maintained hostile diplomatic relations thanks to the Castro brothers, serving as consecutive dictators and framing their political ideology around the destruction of American “imperialism.” Canada, however, enjoys friendly relations with Cuba and has done so for years. Relations were expected to improve under Canada’s leftist Prime Minister Justin Trudeau, whose father was a personal friend of Fidel Castro; the dictator served as an honorary pallbearer at Trudeau’s father’s funeral.

The Canadian government attempted to respect these friendly ties in its statement announcing the withdrawal.

“There is no evidence that Canadian travelers to Cuba are at risk,” Global Affairs Canada said in its statement. “Overall, we have a multifaceted relationship with Cuba, which is very positive and continues.”

This did not stop the Cuban regime from issuing a scathing statement condemning the Canadians for seemingly taking America’s side on the issue. Josefina Vidal, the current Cuban ambassador to Canada, accused the country of “not helping to solve or find answers to the health symptoms reported by the diplomats.”

“This behavior favors those in the United States who use this issue to injure and discredit Cuba,” Vidal wrote in a statement published by the Cuban Foreign Relations Ministry (Minrex). “It is known that individuals with high responsibility in American foreign policy are dead set on provoking a climate of bilateral tension and signaling Cuba as a threat.”

Vidal insisted that the Cuban regime is eager to help find an explanation for the brain damage the diplomats suffered even as her boss, Foreign Minister Bruno Rodríguez, repeatedly refers to the attacks as “science fiction” and the government publishes propaganda reports arguing that the diplomats are too ignorant to identify cricket sounds.

Doctors who have treated the patients insist they have suffered physical damage.

Marshall insisted that the victims of these attacks do not show signs of suffering a psychological illness that makes them believe they have been injured. “I have actually seen a number of patients with conversion disorder, factitious disorder over the years. These patients I’m seeing don’t seem to be like that,” he said.