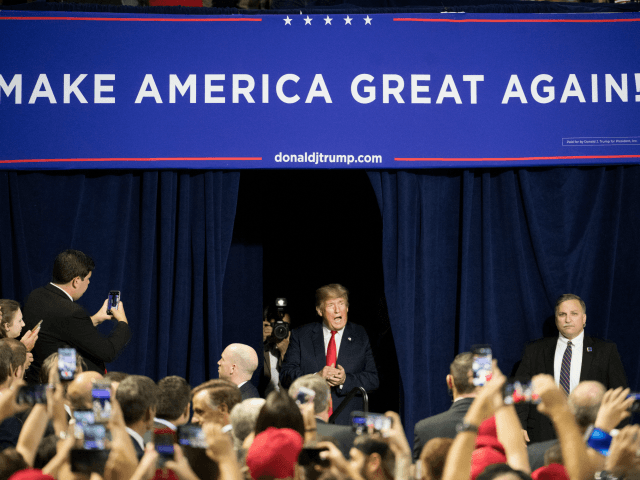 Trump’s new campaign manager Brad Parscale estimated that there were 20,000 people at the rally — 7,000 inside the arena, 2,000 in the overflow room, and thousands outside.

Rep. Phil Roe of Tennessee said 92,000 had requested tickets to the event. Some supporters arrived Sunday night to stake their position in the line.

The rally was held at the Freedom Hall Civic Center, with large screens set up by the campaign for the overflow crowd.

“Watching outside on the big screen with all these fine folks is still better than watching at home!!!” wrote one Trump supporter on Reddit.

Trying to estimate precise crowd size was impossible on the ground, as the line snaked various ways up and down the hill, around the parking lots, etc. But I’d still place it as enough to fill at least one and probably two more Freedom Halls. https://t.co/7Gn8Ok3Fq6

Big crowds. Nearly 7k inside, nearly 2k in overflow and thousands outside. Estimating 20,000 in attendance. Big numbers! @MarshaBlackburn has a great chance of winning in November. pic.twitter.com/h1wPclPfAe

Parscale shared a video on Twitter of the massive line waiting to enter the arena, calling it “one of the longest lines” in the history of Donald Trump rallies. President Donald Trump also shared it on his Twitter account.

This group of Trump supporters is ready for today’s rally- they’ve been in line outside Freedom Hall since about 10am! #TrumpInTriCities pic.twitter.com/9aTfwevIxa

The lines in Johnson City, Tenn. outside the MAGA rally and several hours before Trump arrives snakes under baking sun along a street and through a parking lot. pic.twitter.com/aYRelOM5mX

Trump thanked supporters from Tennesee, encouraging them to get out and vote.