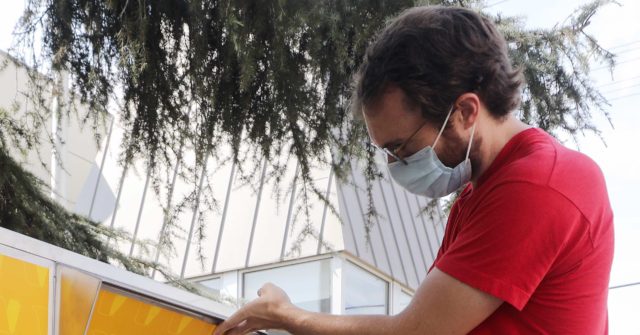 California Republicans are defending their use of ballot “drop boxes” as a legal form of “ballot harvesting” after California’s Democratic state election officials sent them a cease-and-desist letter demanding that they stop using them.

On Sunday evening, the Orange County Register reported that unsanctioned ballot drop-off boxes — many of them marked “official” — were appearing throughout the state, often at “local political party offices, candidate headquarters and churches.”

“Doing my part and voting early,” Jordan Tygh wrote in the now-deleted tweet. “DM me for convenient locations to drop your ballot off at!” pic.twitter.com/c7OUHlrWiG

In a statement, Becerra warned the CRP:

“Misleading voters is wrong, regardless of who is doing it,” Secretary of State Alex Padilla said. “Political parties and campaigns can engage in get out the vote efforts, but they cannot violate state law. The unofficial, unauthorized drop boxes in question violate state law and jeopardize the security of voters’ ballots. State and local elections officials have worked tirelessly to provide voters multiple safe, secure options to return their vote-by-mail ballots. These unauthorized drop boxes are a disservice to elections administrators and a disservice to voters who deserve to cast their ballots with clarity and confidence.”

However, Republicans counter that all they are doing is follow the “ballot harvesting” law that Democrats themselves passed.

In 2016, Democrats legalized the practice — which is considered illegal in most other states — of allowing third parties to collect and deliver mail-in ballots from voters. The “third parties” can literally be anyone, including political party operatives, and do not need to register or pass any kind of background check. There is also no limit to the number of ballots that can be “harvested.”

Speaker of the House Nancy Pelosi (D-CA) tried to legalize the process nationwide in her coronavirus stimulus proposals.

The practice caught Republicans by surprise in 2018, when Democrats used “ballot harvesting” as part of their successful effort to flip seven Republican-held congressional districts. Hundreds of thousands of ballots were reportedly delivered to polling places.

Early experiments at “ballot harvesting” by asking Republicans directly for their ballots did not work, as Republicans tend to mistrust strangers with their ballots. (Democrats reportedly use the same agents to register the voter and to collect the ballots.)

Republicans appear to have settled on a new method: using drop-off boxes at Republican offices or otherwise friendly locations.

California officials say the drop-boxes violate a state law requiring ballot harvesters to identify themselves by signing the mail-in envelopes.

State Republican Party spokesman Hector Barajas pointed Breitbart News to a new law passed by the Democrat-dominated state legislature in 2018 that specifies that “a ballot shall not be disqualified solely because the person authorized to return it did not provide on the identification envelope his or her name, relationship to the voter, or signature.”

Barajas also argued that any kind of receptacle can be used by law to store the ballots that a “ballot harvester” collects.

In a statement to Breitbart News, Barajas said:

“The Democrats amended the law to remove all of the restrictions on WHO can harvest ballots and provided NO rules about HOW ballots can be collected except that someone cannot be compensated per-ballot. The CRP’s program goes above and beyond, is less coercive and more secure than other methods of collecting ballots

“The way Democrats wrote the law, if we wanted to use a Santa bag, we could. A locked heavy box seems a lot safer.”

Barajas also pointed out that California officials had awarded a $35 million voter outreach contract to a consulting firm, SKD Knickerbocker, closely tied to Joe Biden’s presidential campaign (and referring to itself as “Team Biden” in company materials).

President Donald Trump tweeted about that controversy on Tuesday morning:

California hired a pure Sleepy Joe Democrat firm to count and “harvest” votes. No way Republicans get a fair shake. Lawyers, get started!!! @GOPLeader California is in big trouble. Vote Trump and watch the greatest comeback of them all!!! Also, New York and Illinois – go for it!

The California Globe reported last week that California State Controller Betty Yee had rejected the state’s contract with the firm — but that the state was not answering questions. Fox News’ Tucker Carlson featured the story on Monday night.

Barajas told Breitbart News that Padilla’s cease-and-desist letter is “just a deflection from the mounting criticism for giving a non-budgeted, $35 million get-out-the-vote contract to a ‘Team Biden’ PR firm, which is also receiving hundreds of thousands of dollars to oppose Republican candidates in targeted California districts.”

Barajas told Breitbart News that the GOP would be removing the word “official” from its ballot drop-off boxes to avoid confusion.