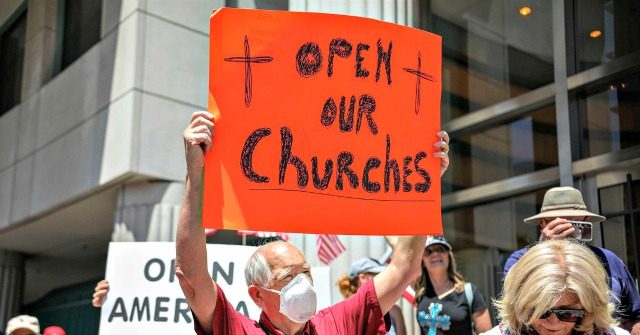 A Christian businessman and activist reached out to Breitbart News about the “selective targeted harassment” churches and faith communities are facing under Democrat Gov. Gavin Newsom and state officials as part of restrictions said to be necessary to stop the spread of the coronavirus.

Almost 500 people attended the event, where social distancing and other health protocols were in place, according to Ang, who noted that on the same day thousands of people gathered in Los Angeles for the anti-Trump Women’s March.

“LA County is unfairly treating the faith community while giving special treatment to leftist liberal groups as evidenced by their preferential treatment of the lack of social distancing events by the Women’s March in Los Angeles,” Ang told a reporter.

Hello Asian Industry B2B and On A Mission Church,

A constituent elevated a concern to Supervisor Solis’ office regarding the planned in-person Walnut Family Fair event that you are planning for tomorrow, October 17, 2020.

Events like the one you are planning for this weekend are not allowable under state and local Health Officer Orders that prohibit in-person gatherings. Relevant language can be found in the Los Angeles County Health Officer Order in section 3 (page 2) and section 7 (page 6). Violation of or failure to comply with this order is a crime punishable by fine, imprisonment, or both under CA Health and Safety Code 120295 and Los Angeles County Code 11.02.080.

Existing community transmission of COVID-19 in Los Angeles County remains widespread and continues to present a substantial and significant risk of harm to residents’ health. As of yesterday, there have been at least 285,183 cases of COVID-19 and 6,834 deaths reported in Los Angeles County. There remains a strong likelihood that increased interactions among members of the public will result in a significant and increasing number of cases of community transmission. Because those without symptoms can transmit the virus, and because evidence shows the infection is easily spread, preventing, limiting, and placing conditions on various types of gatherings and other direct and indirect interpersonal interactions have been proven to reduce the risk of transmitting the virus.

We appreciate the closures and service modifications due to COVID-19 have been devastating for individuals, families, businesses, and institutions across the county. However, for the safety of the City of Walnut community, you will not be able to host this event at this time.

While the county did not shut down the four-hour festival, officials did show up to taunt organizers and also harassed a gathering of more than 100 pastors earlier this week where a discussion focused on the ongoing effort by state and local officials to prevent Christians and other faiths from the First Amendment’s guarantee of the free exercise of religion.

Ang shared with Breitbart News that the pastors conference, which was held at a restaurant’s banquet facility, was forced to break up into two groups to comply with Newsom’s limit of 50-person gatherings.

“The harassment and threats to shut down today’s pastors conference and Saturday’s Walnut Family Fair at a church are clear examples of the constant persecution of Christians and Conservatives by governmental agencies,” Ang told Breitbart News.

“Today, we move ahead and comply with orders to break down our crowd into several different sessions, which hurts the unity of a large event, but for the governmental entities harassing an honest restaurant and threatening to revoke its license for hosting this pastors gathering is once again, political bullying and cherry picking,” Ang said. “Women’s marches, BLM, and other marches are not subject to this much scrutiny.”

Ang and a number of pastors who attended the gathering have filed lawsuits challenging the state’s virus restrictions for churches, houses of worship, and faith-based events. One of those pastors is Rob McCoy of Godspeak Calvary Chapel, which was ordered to stop in-person services by a California judge late last month.