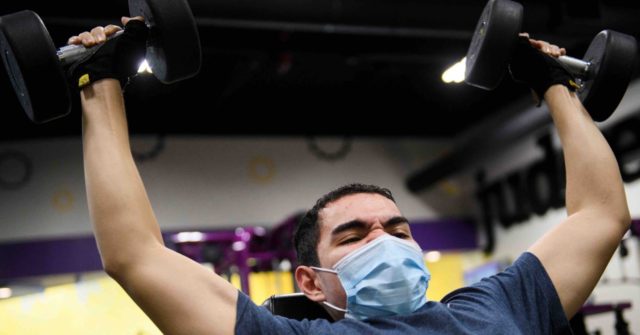 The State of California has begun to reopen slowly from coronavirus shutdowns as more counties moved this week from the most-restrictive “purple” tier into the “red” tier, allowing restaurants, gyms, and schools to reopen, albeit at limited capacity.

As of this week, the Associated Press (AP) reported Wednesday, “90% of the state’s nearly 40 million residents can enjoy a restaurant meal indoors, watch a movie in a theater and sweat it out inside a gym.” In November, 94% of the state’s population lived in a “purple” tier that was subject to a month-long nighttime curfew to deter holiday gatherings.

California has been on a reopening roll since a deadly winter surge that saw skyrocketing hospitalizations and soaring positivity rates. San Diego and Sacramento were among the counties moving out of the most restrictive purple tier, public health officials announced Tuesday.

Los Angeles and a dozen other counties were allowed to reopen Sunday, moving to the lower-risk red tier of a four-tier, color-coded system announced by Gov. Gavin Newsom in August. The system dictates which activities can open based on factors such as a county’s case rates per population and test positivity.

Business owners greeted the news warily, but with relief, after a year of crushing restrictions that allowed many to close their doors. The reopening happens to coincide with the conclusion of an apparently successful effort to force a recall election of Gov. Gavin Newsom (D), whose restrictive policies were unpopular — especially as he was perceived to be flouting them by attending a dinner with lobbyists at the elite French Laundry restaurant in Napa County in November.

Some gym owners in Los Angeles County grumbled that the new allowance for 10% capacity would barely make an impact. And school reopenings were a patchwork, as some districts delayed reopening, thanks in part to teachers’ unions’ opposition.

However, for many California residents, the long nightmare of the coronavirus pandemic shutdowns appears to be ending.

Joel B. Pollak is Senior Editor-at-Large at Breitbart News and the host of Breitbart News Sunday on Sirius XM Patriot on Sunday evenings from 7 p.m. to 10 p.m. ET (4 p.m. to 7 p.m. PT). His newest e-book is How Not to Be a Sh!thole Country: Lessons from South Africa. His recent book, RED NOVEMBER, tells the story of the 2020 Democratic presidential primary from a conservative perspective. He is a winner of the 2018 Robert Novak Journalism Alumni Fellowship. Follow him on Twitter at @joelpollak.