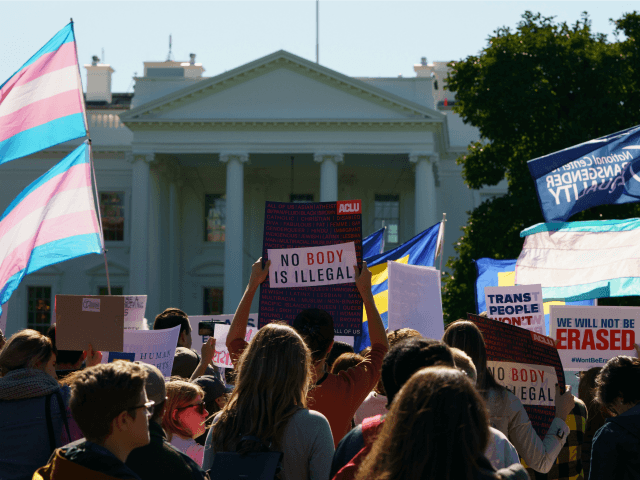 Lobbyists for the transgender ideology are using more than 50 major companies to oppose President Donald Trump’s plan to preserve the law’s recognition that men and women are equal, different and complementary.

The transgender activists want Trump’s agencies to enforce their demand that every person’s biological and legal sex be determined by their feelings of “gender identity,” not by their biology.

This revolutionary ideology would force the nation’s judges, police officers, teachers, and corporate speech-enforcers to effectively outlaw the public’s popular recognition that the two male-or-female sexes have complementary differences, including a preference for sexual privacy in single-sex showers and for equality within single-sex sports leagues.

“Policies that force people into a binary gender definition [male or female] determined by birth anatomy fail to reflect the complex realities of gender identity and human biology,” says the letter signed by Facebook, Apple, Amazon, Google, Microsoft, Twitter, Nike, Intel, LikedIn, and many others.

The letter insists that rare genetic variations within a few people — such as “intersex” people– invalidate the normal view that people are either male or female. It says:

We, the undersigned businesses, stand with the millions of people in America who identify as transgender, gender non-binary, or intersex, and call for all such people to be treated with the respect and dignity everyone deserves.

We oppose any administrative and legislative efforts to erase transgender protections through reinterpretation of existing laws and regulations. We also fundamentally oppose any policy or regulation that violates the privacy rights of those that identify as transgender, gender non-binary, or intersex.

The letter’s signatories were organized by the Human Rights Council and Out Leadership. Both organizations have many gay and lesbian members in the leadership of many elite firms. Both groups have begun pushing the transgender ideology since the Supreme Court changed the nation’s legal definition of marriage in a 2015 decision authored by now-retired Justice Anthony Kennedy. The pro-transgenderism advocacy is heavily funded by a network of wealthy transgender and gay advocates.

The corporate push is intended to block Trump from removing the tangle of pro-transgender policies and definitions that have been quietly slipped into the nation’s patchwork of laws by judges and by officials working for former President Barack Obama.

Those changes are pushed by advocates and judges who insist that a person’s self-declared “gender identity” exists and also is more legally important than their biological sex — even though federal anti-discrimination law does not use the “gender identity” term.

If not removed, the gradual pro-transgender changes could be exploited by progressive judges on the Supreme Court to impose the unpopular transgender ideology nationwide.

Trump’s deputies have already removed many of Obama’s changes.

For example, the Department of Defense has junked Obama’s pro-transgender rules and has revived the “bright line” of biology to define male and female soldiers.

The Department of Education dropped Obama-era instructions to schools telling them to adopt the transgender ideology, and the Department of Justice is rolling back Obama’s rules that allowed men who say they are women to be jailed in women’s prisons. The Department of State has begun opposing legal agreements that use the “gender” term instead of male or female, for example, in statements that denounce violence against women.

An Oct. 21 New York Times report said Trump’s officials had drafted a memo which defines a person’s legal sex as “a person’s status as male or female based on immutable biological traits identifiable by or before birth.” The policy would not reduce normal sex-discrimination protections for the tiny percentage of “transgender” people trying to live as members of the other sex but would deny the claim that a person’s “gender identity” is more important than biology when recording a person’s legal sex.

The Trump policy would protect peoples’ right to use and talk about single-sex institutions. Those institutions include single-sex showers and women’s sports leagues, male and female ideals of behavior and appearance, scientific descriptions of male and female bodies, as well as single-sex civic groups for a wide variety of men or women, such as clubs for women executives or for lesbians.

Few GOP legislators openly criticize the ideology, but many Democratic legislators are backing the revolutionary ideology, despite the growing health risks to children:

.@RepJoeKennedy has a message for all the young trans people out there – you are seen, you are heard, you are loved, and you #WontBeErased. pic.twitter.com/CsjsAGasuX

MUST WATCH: Transgender activist and actress @LaverneCox gave an impassioned speech to Massachusetts residents to vote #YesOn3 to uphold the dignity and respect for the transgender community. #TransLawMA #mapoli pic.twitter.com/GQmtu9v6Sv

Media reports portray the ideological dispute merely as an effort by Trump to eliminate existing rights for people who say they are transgender. But Congress has not set any protections for people who claim discrimination because of their transgender status, and few media articles mention the revolutionary political ambitions of the transgender ideology.

The central issue in the transgender vs. two-sex biology fight was outlined nine years ago by then-Democrat Rep. Barney Frank, a far-left Massachusetts Representative in Congress who was the leading advocate for creating new legal rights for gays and lesbians. He told National Journal in 2009:

That’s the question—whether the law should embody that principle [that this is a two-[sex] society], or should the law say to the very small minority of people who do not want to stay the same [sex] for the rest of their lives, that they will not be discriminated against … I’m against discrimination based on anything other than the ability to do the job.

The transgender movement is diverse, so its different factions have different goals and priorities. It includes sexual liberationists, progressives, feminists who wish to blur distinctions between the two sexes and people who glamorize the distinctions between the two sexes. It includes high-profile children, people who are trying to live as members of the opposite sex and people trying to “detransition” back to their sex, men who say they are lesbians, masculine autogynephiles, wealthy donors, politicians, political professionals, and medical service providers.

Despite the growing damage to young people — including people who give up their claim to be “transgender” and reclaim their sex —  the gender ideology is rapidly gaining power, aided by huge donations from wealthy individuals and medical companies. In Ohio, for example, in February, a judge forced parents of a teenage girl to give up custody so she can begin a lifetime of drug treatments and surgery that will allow her to appear as a male.