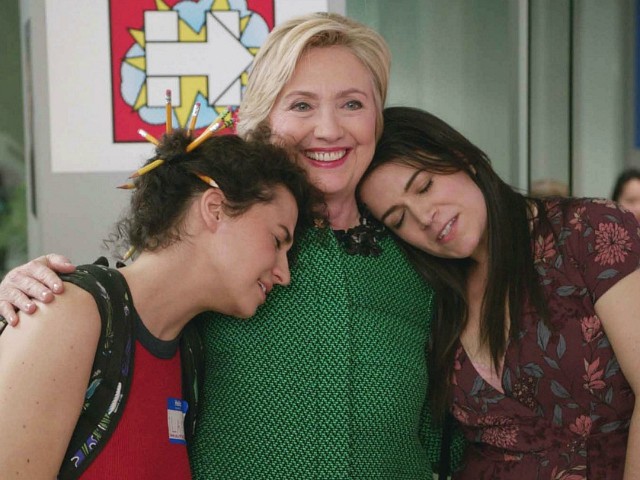 Despite Hillary Clinton’s high-profile cameo on their show Broad City, stars Abbi Jacobson and Ilana Glazer say the twice-failed presidential candidate should not run for the White House in 2020.

“I love Hillary. I don’t think she should run again,” Jacobson said in an interview with The Hill before heading into the 21st annual Mark Twain Prize for American Humor at the Kennedy Center in Washington, D.C. on Sunday.

“It’s like sad for me to say that,” Jacobson added. “I feel like we still very much need her to be involved in some way. I don’t know what that is … I think that she still has a lot to do.”

Glazer concurred with her co-star, calling for a “Democratic socialist” to run against President Donald Trump. “We need someone who hasn’t been in the machine for this amount of time,” Glazer said.

“She was the most qualified candidate that ever ran, but as far as branding the Democrats, I think it needs to be Kamala Harris, Elizabeth Warren,” she added.

Despite wide-spread reports signaling Clinton was weighing a third and final bid for the highest office in the land, Philippe Reines, a former aide to the former Secretary of State, says supporters shouldn’t get their hopes up. “It’s somewhere between highly unlikely and zero,” Reines told Politico when discussing the possibility of another Clinton bid.

In 2016, Clinton made a brief cameo as herself on Broad City, in which Jacobson and Glazer freaked out after encountering the then-presidential candidate at her Brooklyn campaign headquarters. Inviting Clinton rather than her rival, Sen. Bernie Sanders (I-VT), drew ire from progressives, who accused the pair of favoring one candidate over the other.

“We were not trying to make a statement, to be honest,” Jacobson said, as quoted by Entertainment Weekly. “We wrote season 3 a year ago, at this point. That’s not our show really: Let’s make a political stance here. It was really more that this is something Ilana’s character would do.”

“Hillary, even regardless of where we stand – and we love Hillary – is such an iconic figure … These girls being around her is not an everyday thing,” she added.