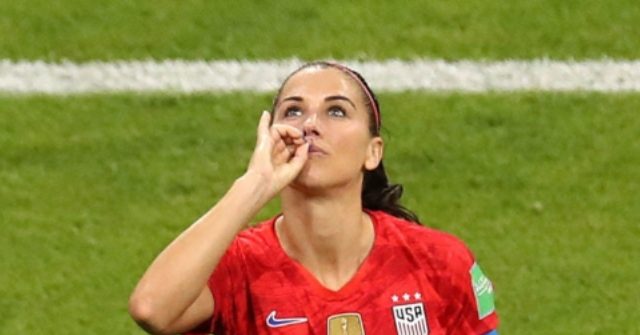 Morgan, who was celebrating her 30th birthday that same day, seemed to be raising the idea of drinking tea by putting her fingers to her lips, pinky raised, after she made the big goal that clinched the U.S. team’s appearance in the finals and knocking the Brits out of contention.

Morgan later said that her “tea” move was in response to the criticism the team received, especially after beating Thailand 13-0. The U.S. team was charged with unseemly and over exuberant celebrating during the blow-out win.

“I wanted to keep it interesting,” Morgan told the media. “I know Megan Rapinoe has the best celebration. I had to try and step up this game. I feel like this team has had so much thrown at them and us. I feel like we didn’t take an easy route through this tournament and ‘that’s the tea.’”

Congrats to the #USWNT for earning that tea. On to the final! 🇺🇸 pic.twitter.com/nI8HoMjN1D

But not everyone thought the “tea drinking” was all that amusing. Many took to Twitter to criticize Morgan for her slight.

Many others agreed with Sanderson:

And this is why the world hates the americans. #alexmorgan tea drinking celebration is classless and arrogant.

Come on @Lionesses – make these cocky yanks choke on it. pic.twitter.com/lOybEhNRGT

Greetings from London, where I am injecting this into my veins. pic.twitter.com/ULthPGTfEC

A little tad cocky, I shall say… Alex Morgan celebrating her goal with a little tea party… pic.twitter.com/c9glODVDL4

even more “tea” for u brain dead yanks pic.twitter.com/jNlD9DrCRq

Didn’t offend me, but I didn’t know what she was doing frankly. I think she was trying to be offensive though.

How to piss off a nation, Alex Morgan style #USAENG pic.twitter.com/ovdKlohQzu