The lawsuit and the explosive allegations contained therein were announced on Tuesday as most of the sports world was still reacting to Tom Brady’s retirement announcement. Flores’ lawsuit is filed against the NFL, the Giants, Broncos, and Dolphins, as well as “John Doe team 1-29.” Moreover, it is a class actions lawsuit, meaning that the former Dolphins coach expects to be joined by other plaintiffs making their case against the NFL’s allegedly racist hiring practices.

Brian Flores’ class action lawsuit against the NFL – he is being represented by the same firm that represented Harvey Weinstein victims and former Fox News employees in their discrimination cases https://t.co/1EqJ7qDA4A pic.twitter.com/jrSjm12XHT

In the suit, Flores claims that his former boss, Dolphins Owner Stephen Ross, offered to pay him an extra $100,000 per loss to ensure the Dolphins would own the first overall pick in the 2020 NFL Draft. In addition, Flores claims that Ross pressured him to violate league tampering rules by recruiting another quarterback under contract with another team. 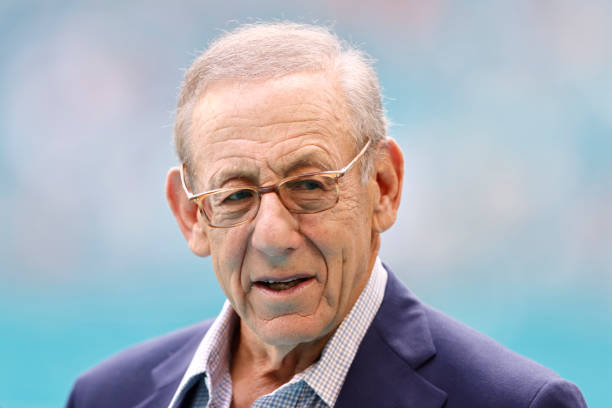 MIAMI GARDENS, FLORIDA – SEPTEMBER 19: Owner Stephen Ross of the Miami Dolphins looks on before the game against the Buffalo Bills at Hard Rock Stadium on September 19, 2021, in Miami Gardens, Florida. (Photo by Michael Reaves/Getty Images)

Flores claims he refused to recruit the “prominent player” Ross wanted him to pursue.

As to the allegations pertaining to the Giants and Broncos, Pro Football Talk reports:

The lawsuit also says the Giants scheduled a sham interview with Flores last week to comply with the Rooney Rule, and that Flores learned that his interview was a mockery because his former boss, Patriots coach Bill Belichick, mistakenly texted him a congratulatory message, thinking that the Giants were going to hire him. In fact, Belichick later revealed that he had misunderstood another text he received and that he was actually told the Giants were hiring Brian Daboll. The Giants did, in fact, hire Daboll, and the texts suggest that they had already made that decision and scheduled the interview with Flores only because the Rooney Rule required them to interview a minority coach before they could make the Daboll hiring official.

Flores also says the Broncos put him through a similar sham interview three years ago, and that they never had any intention of considering him for the job. The Broncos hired Vic Fangio shortly after Flores’ interview.

An alleged text exchange between Belichick and Flores will undoubtedly serve as a centerpiece of Flores’ case. The timing of the texts suggests the Giants already knew they were hiring Brian Daboll before they scheduled an interview with Flores.

The text exchange per the suit, via Yahoo! Sports:

Flores: Did you hear something I didn’t hear?

Flores: I interview on Thursday. I think I have a shot at it.

Belichick: Got it — I hear from Buffalo & NYG that you are their guy. Hope it works out if you want it to!!

Flores: That’s definitely what I want! I hope you’re right coach. Thank you. … Coach, are you talking to Brian Flores or Brian Daboll. Just making sure.

Belichick: Sorry — I f***ed up . I double checked & I misread the text. I think they are naming Daboll. I’m sorry about that. BB

Flores released a statement saying, “In making the decision to file the class action complaint today, I understand that I may be risking coaching the game that I love, and that has done so much for my family and me. My sincere hope is that by standing up against systemic racism in the NFL, others will join me to ensure that positive change is made for generations to come.”

The NFL, for their part, released a statement vowing to fight charges they believe are “without merit”:

The NFL and our clubs are deeply committed to ensuring equitable employment practices and continue to make progress in providing equitable opportunities throughout our organizations. Diversity is core to everything we do, and there are few issues on which our clubs and our internal leadership team spend more time. We will defend against these claims, which are without merit.

The lawsuit also names former 49ers quarterback and original anthem-protester Colin Kaepernick and his continued unemployment in the NFL as an example of racist hiring practices.