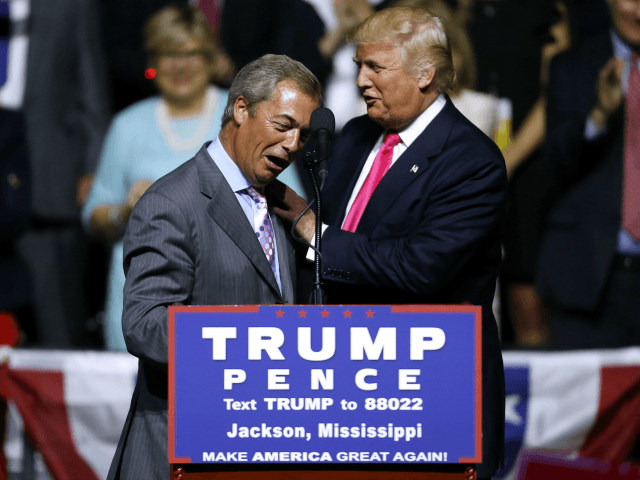 Brexit leader and President Trump confidant Nigel Farage has announced he is leaving the UK Independence Party (UKIP), the British political force he led on-and-off for nearly a decade over decisions by its new leader Gerrard Batten.

Announcing his departure on his LBC talk radio slot Tuesday evening, Mr Farage reflected on his time in UKIP which he said he had joined in 1992 when it was known as the Anti Federalist League.

With a heavy heart, and after all my years of devotion to the party, I am leaving @UKIP today. pic.twitter.com/xJk4a2P494

Calling current leader Gerard Batten’s decision to bring English Defence League founder and street organiser Tommy Robinson into the party “catastrophic”, Mr Farage said of the work he had done as leader to see that UKIP discussed difficult topics without straying into extremism. He said:

One of the keys to [UKIP’s success in bringing about the 2016 referendum] was talking about things that everyone else wanted to brush under the carpet. Issues like immigration, which we were told that if you talked about that, it was somehow disreputable. I made sure that UKIP talked about tough issues, but we absolutely excluded anybody who’d ever been a member of the British National Party, the English Defence League, we wanted to make sure that when the abuse was thrown at us it couldn’t possibly be proved to be true.

I’m afraid that over the course of the last few months under this leader, Mr Gerrard Batten, a lot has changed. He seems to be pretty obsessed with Islam, not just Islamic extremism, but Islam. UKIP wasn’t founded to be a party on fighting a religious crusade… [Robinson] brings with him a group of people among which we see scuffles, violence, many have criminal records — some pretty serious. All of this drags UKIP away from being an electoral party, to a party of street activism.

I wrote ten days ago that this direction was catastrophic, especially at a time the great Brexit betrayal is upon us.

“Mr Brexit” Nigel Farage — who the White House revealed last week is in regular contact with the President of the United States to discuss Brexit, said Batten’s direction had not only damaged UKIP as a party but was also damaging Brexit itself. He continued:

This Sunday there is going to be a march in London with Gerard Batten and Tommy Robinson as the speakers, two days before the most important parliamentary vote in modern times. The image that will give of what Brexit stands for is something our enemies will use against us for many years to come. Damaging Brexit is one thing, but damaging the Brexit cause is even worse.

I, with a very heavy heart… simply can’t go on with it. I simply don’t recognise the party I founded and fought for all those years, it has been so tarnished… as of now, I have resigned my membership of UKIP.

Breitbart London reported in November on the comments of senior party sources within UKIP on Farage’s remarks when he said he was “appalled” by Batten’s direction for the party. One unnamed elected politician from the party said “Nigel Farage is right. Right now, the party must focus on Brexit.”

“who knows exactly what tactics she’ll use, but I’m sure that every blackmail trick known to man is going to be used to try and get MPs to vote for the deal.” https://t.co/h8OiJ4pRxk

Despite having not been leader of UKIP since 2016, Mr Farage has seen rising involvement in the continuing Brexit debate in recent months, heading the Leave Means Leave campaign and touring the country, giving speeches.

Calling Theresa May’s Brexit the “worst deal in history“, Mr Farage told Breitbart London that the deal was akin to voluntarily going to prison and then trusting the jailer to let you out when you asked to go and that the Prime Minister would use “every blackmail trick known to man” to push it through.