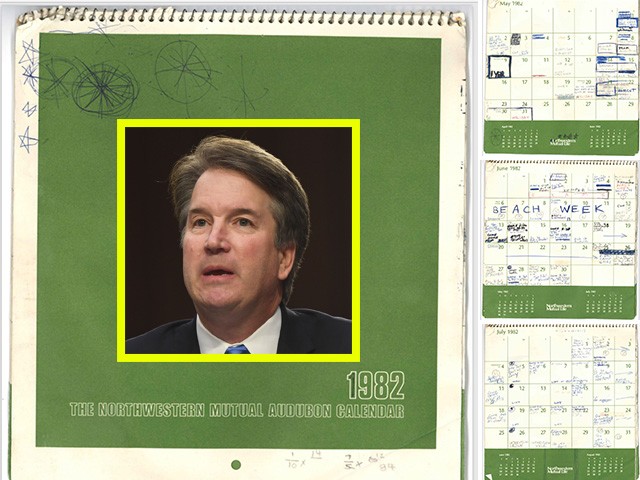 Supreme Court nominee Judge Brett Kavanaugh’s calendar from the summer of 1982 has been released after being submitted to the Senate Judiciary Committee — and it reveals an active summer, though the future judge was grounded three weekends in a row.

Kavanaugh submitted the calendar this week as evidence that he was not at a party of the kind referred to by Christine Blasey Ford in her accusations that he groped her drunkenly in the presence of others (all of whom have contradicted her claims).

The calendar indicates that Kavanaugh enjoyed sporting events, trips to the beach, and weightlifting. He was also grounded three weekends in a row in May 1982, for unexplained reasons, though he appears to have been permitted a furlough to attend his prom.

Senate Judiciary Committee chair Chuck Grassley (R-IA) has insisted that the hearing featuring Kavanaugh and Ford will take place on Thursday as scheduled, though it is not entirely certain that Ford will testify.

On Wednesday morning, Deborah Ramirez, who accused Kavanaugh of exposing himself at a party at Yale — a story that has also been contradicted by all of the supposed witnesses — indicated that she, too would be willing to testify, though she had not returned previous requests from the committee for a statement.

President Donald Trump has defended his nominee, who has been adamant in his denials and declared earlier this week that he would not give up in the face of accusations he described as false.