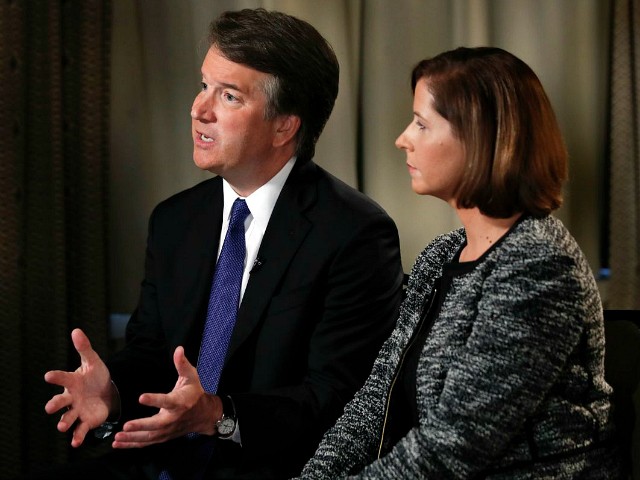 WASHINGTON, DC — Judge Brett Kavanaugh spoke publicly on Monday for the first time since being accused of sexual misconduct, telling Fox News Channel’s Martha McCallum that the accusations against him are categorically false, that he looks forward to clearing his name before the Senate, and that all he asks for is a fair process.

Kavanaugh appeared with his wife Ashley on Fox News’s The Story, answering questions from McCallum ahead of his Thursday testimony before the Senate Judiciary Committee. At issue are allegations from Christine Blasey Ford, who said Kavanaugh groped her at a party when he was 17 years old, and from Deborah Ramirez, who said he exposed himself at a drunken dormitory party when they were freshmen together at Yale.

Both women’s accounts are currently unraveling, with the five people Ford said were at the party in question all denying her account, and with more than a dozen people contacted regarding Ramirez’s accusations likewise denying the second account.

“All I’m asking for is fairness and that I be heard in this process,” Kavanaugh said early in the interview, a theme he would repeat several times to emphasize what he was looking for during this unexpected add-on part of his Senate confirmation process to the U.S. Supreme Court.

Responding directly to the accusations against him, Kavanaugh was emphatic. “I’ve never sexually assaulted anyone — not in high school, not ever,” he told McCallum.

He noted that within 24 hours of being accused, 65 women who knew him as a student signed a letter affirming that he always conducted himself with grace and dignity and unfailingly acted as a gentleman around women.

Nor did he think there was much opportunity to have interacted with Ford. “We did not travel in the same social circles,” the 53-year-old told McCallum.

“I was never at any such party,” Kavanaugh said of the event Ford described. “The other people who were alleged to be present say that they do not remember any such party.”

The judge also cited the fact that the other teenage young woman Ford named in her story, Leland Keyser, has publicly denied Ford’s description of the party. “She doesn’t know me and never remembers being at a party with me any time in her life,” he recounted from Keyser’s response.

Brett’s wife Ashley was at his side during the interview and explained why she did not believe these allegations.

Regarding the second accuser, Ramirez, Kavanaugh cut to the chase as to why many commentators think that Ramirez is crashing and burning only 24 hours after going public.

“The New York Times just reported that just last week, the person making the accusation was calling other classmates saying she was not sure that I had done this,” he explained. The Times chose not to run the story after they contacted more than a dozen people, none of whom could corroborate Ramirez’s account that Kavanaugh exposed himself to her at a Yale party in which she admitted that she was severely drunk.

The interview was uncomfortably candid when Kavanaugh explained that these playboy accusations did not fit the reality that, as a young man, he was something of a “nerd,” a top student focused on academics rather than a lady’s man. “I did not have sexual intercourse or anything close to sexual intercourse in high school or for many years thereafter,” he told McCallum.

“So you’re saying, through all these years in question, you were a virgin?” McCallum asked, referencing the fact that it is uncomfortably unfortunate to have to discuss such intimate personal details in light of the accusations.

They elevated the discussion by focusing on the path forward by talking about what the nominee was looking for going forward.

“I want a fair process where I can defend my integrity,” Kavanaugh asserted.

“I’m not going to let false accusations drive me out of this process,” he responded when McCallum explored whether he was willing to withdraw from the process. “I have faith in God and faith in the fairness of the American people. America is about fairness, and hearing from both sides.”

“I was first interviewed last Monday, the day after the allegation appeared,” the judge explained, “under penalty of felony, and I denied this categorically and unequivocally, and I said twice during that — I want a hearing tomorrow.”

“I want to clear my name as quickly as possible,” he declared.

He admitted that he has his flaws but insisted that he is innocent of these accusations.

“I think everyone is judged on their whole life. I’m a good person,” Kavanaugh opined. “I’ve led a good life. I’ve tried to do a lot of good for a lot of people. I am not perfect. I know that. None of us is perfect. But I’ve never done anything like this.”

Ashley addressed the human toll of this ordeal. “It’s very difficult to have these conversations with your children,” she said.

She told their two young daughters, “Just remember, you know your dad.”

Referencing the political reality of presidents who sometimes distance themselves from nominees who become problematic, McCallum asked Kavanaugh if President Donald Trump is going to stick with him.

“I know he’s going to stand by me,” Kavanaugh responded, saying that the president had recently contacted him to assure him of his support. “He called me this afternoon.”

The Senate Judiciary Committee is scheduled to hear from Kavanaugh this Thursday.