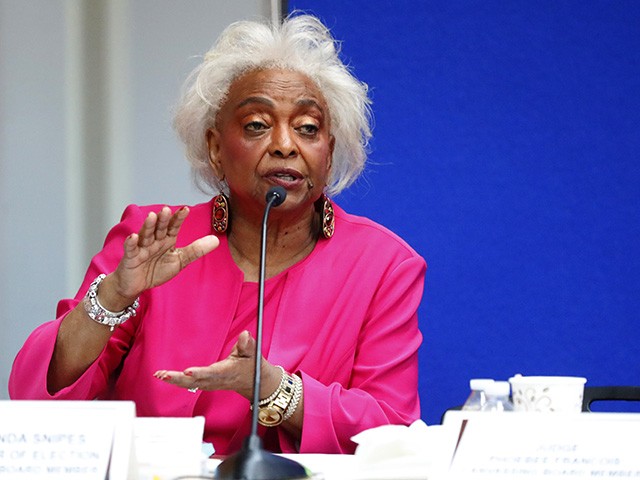 Broward County Elections Supervisor Brenda Snipes is confident in the face of questions as to whether her office can count 700,000 ballots by Thursday’s deadline, telling reporters Tuesday that “there has never been a deadline we have missed.”

Snipes is overseeing the county’s recount of the midterm elections’ U.S. Senate and governor’s races.

WATCH: ‘We will complete the recount. There has never been a deadline we have missed’: Broward Supervisor of Elections Brenda Snipes
. @joanmurraycbs4 reports tonight at 5. https://t.co/fGdzpTTcdB @BrowardVotes pic.twitter.com/YLQ9n3O1Dn

“We have finished phase one for the sorting of the most part. I think we do more sorting on election day than tonight,” Snipes told reporters during a press briefing. “Based on the way that the machines are moving and the amount of paper that they are processing, I think we are on a good schedule and we will finish before the deadline Thursday.”

“That has been our position,” she maintained.

Last Friday, a judge ordered Snipes to allow immediate inspection of voter records during an emergency hearing Friday. The court was asked to intervene in the tight U.S. Senate race between incumbent Sen. Bill Nelson (D-FL) and Gov. Rick Scott (R-FL) as the two sides prepare for a possible recount. Snipes defied a court order allowing the inspection of vote records Friday evening. Rep. Matt Gaetz (R-FL) has vowed to request a judge to hold the official in contempt of court.

Reacting to allegations of voter fraud, Snipes admitted that while there were some issues with counting ballots, the lawsuits against her office were an attempt to undercut her integrity.

“There have been issues that didn’t go the way we wanted,” she said. “We can call it a mistake, we can call it whatever you want to call it.”

“The lawsuits as they are written certainly cast dispersions on my character and usually we build character over a period of time and character is always on display. And I have worked here for about 15 years and I have to say this is the first time that this office or I have been under such attacks,” Snipes told the press. “If we make mistakes, we own mistakes. If there is something that the public needs to know, then we provide that information.”

President Donald Trump has ratcheted up criticism of Snipes, saying the top Broward elections official has a “horrible history.”

Responding to the criticism, Snipes suggested President Trump was equipped with inaccurate information regarding the recount: “We are in an era when people oftentimes speak without having vetted the information. I’m not sure where the President gets his information from. I have not spoken with him. And I don’t want to make any other comments on that.”

She’s also been accused of illegally opening ballots. The Florida GOP sued her for this and when they brought her to court, they said ‘Hey, your office is opening ballots outside the presence of the canvassing board … what’s your explanation?’ And again, the woman in charge of elections in Florida’s second most populous county argued she thought it was okay because her office didn’t understand the meaning of the word ‘canvassing.’ [Emphasis added]

This is also not the first time that her office has just found ballots. There was actually a canvassing official back in 2012 that complained that heading into a weekend, they were told there were about 150 votes left to be counted and then Monday morning, well actually there are about 950 votes still to go. [Emphasis added]