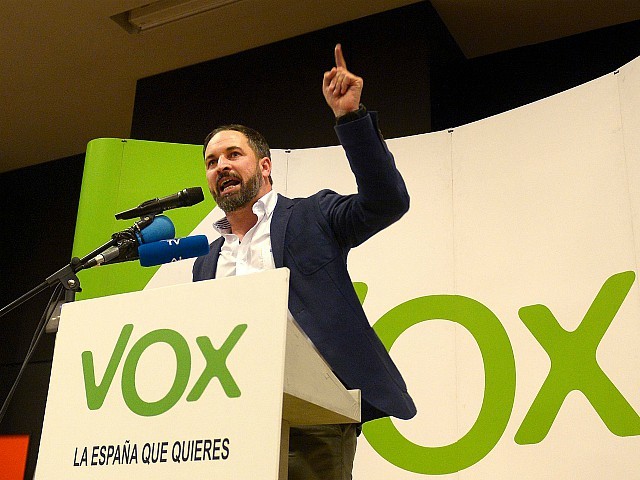 Right-wing populist VOX has entered a Spanish regional parliament for the first time after gaining 11 per cent of the vote in Andalusia on Sunday, according to exit polls.

VOX has won 12 seats in Spain’s most populous region, according to preliminary results where around 99 per cent of votes have been counted, Reuters reports.

In less than three years, VOX has risen from one percent to 11 percent and is now the third-largest party in the Andalusian province of Almería.

The results in Andalusia, normally a left-wing stronghold where 20 percent of the country’s population lives, represent a first major gain for right-wing populism in Spain which is currently led by Socialist Prime Minister Pedro Sánchez.

EuropeElects reports that “The electoral defeat of the centre-left PSOE (S&D) in today’s regional election in Andalusia reflects the downward trend of almost all centre-left, social democratic and socialist parties in #Europe.”

Socialists have governed the southern region since the end of Franco’s rule in 1975, with the Socialists falling short of a majority, gaining only 33 seats in the 109 seat chamber.

Of the other parties, the left-wing Podemos is estimated to have only 17 seats, the somewhat right-leaning Ciudadanos 21, and the nominally conservative People’s Party 26.

This means that the left could lose control of the regional parliament without enough allied parties, with Ciudadanos and the People’s Party able to form a union with the backing of VOX and others to gain a functioning majority.

VOX voters are said to have come from both the left and the right, disenfranchised by establishment politics, with one voter telling AFP that Spain was “getting worse” under the Socialists.

Spain: Up until today, the rise of right-wing parties in Europe had not affected Spain. This has changed today with the Andalusian regional election. VOX (ECR) rises from 1% to 10% within three years, enters a regional parliament for the first time. #EleccionesAndalucia #Spain pic.twitter.com/ch2jsokz2o

VOX was founded in 2013 as an offshoot of the conservative People’s Party by José Antonio Ortega Lara, and the party president is Santiago Abascal (pictured).

Describing itself as Christian democratic, it is pro-life, critical of multiculturalism, and in favour of strong national borders, arguing — like U.S. President Donald Trump — that “a nation without borders is not a nation”.

Abascal, like right-wing populist Matteo Salvini, has accused NGOs of “acting like taxis,” trafficking third-world migrants to Europe, with Spain becoming a focal point for migrant arrivals from Africa in recent months.

The party’s main objective, it states, is to put “Spaniards First” — another nod to President Trump and his America First philosophy — with party general secretary Ortega Smith telling a rally in October: “Together we will make Spain great again!”