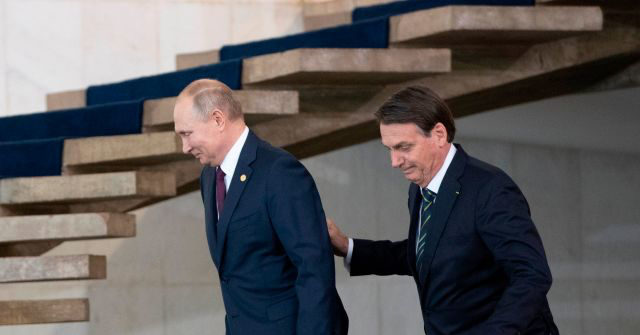 Bolsonaro “plans to arrive in Moscow on February 15. His talks with Putin are scheduled for February 16,” TASS relayed, citing an original report on the matter by the Brazilian newspaper Globo.

“Following the top-level events, Bolsonaro is planning to meet with State Duma Speaker Vyacheslav Volodin as well as hold a meeting with the representatives of the two countries’ business circles,” according to the news agency. The State Duma is part of Russia’s federal legislative body.

The Brazilian president will arrive in Moscow after a month of global concerns about Putin’s potential actions near Ukraine, where the Russian government has been illegally in possession of Ukraine’s Crimea region for eight years. While Kyiv has repeatedly insisted that it has no indication that any impending further invasion is ready, President Joe Biden and his administration have expressed panic and urged Americans to flee the country to avoid “crossfire,” outraging Ukrainian President Volodymyr Zelensky.

Bolsonaro and Biden have a poor, at best, relationship. Biden seemed to threaten economic sanctions against Brazil during a presidential debate speech in September 2020 if the country did not “stop tearing down the forest,” referring to the Amazon rainforest.

“Brazil, the rainforests of Brazil are being torn down, are being ripped down,” Biden alleged. “More carbon is absorbed in that rainforest than every bit of carbon that’s emitted in the United States.”

“Instead of doing something about that, I would be gathering up and making sure we had the countries of the world coming up with $20 billion, and say, ‘Here’s $20 billion. Stop, stop tearing down the forest. And if you don’t, then you’re going to have significant economic consequences,’” the then-presidential candidate posited.

Bolsonaro responded to Biden’s remarks with his own apparent threat to go to war with the U.S., saying he does not accept “bribes” or “coward threats.”

Brazil’s Ministry of Foreign Affairs says Bolsonaro’s trip to Moscow has “been pending for more than a year,” according to a report by BBC Brazil on February 7. Putin invited Bolsonaro to visit him in Moscow for bilateral talks on December 1, 2021, while addressing diplomats during an “ambassadors’ credentials presentation ceremony” in Moscow.

“We will be happy to see the president of Brazil in Russia,” Putin said during his speech. “Brazil is one of Russia’s most important strategic partners.”

“Putin noted that Russia will continue to gradually strengthen the bilateral cooperation with Brazil on trade, energy, scientific and other tracks,” TASS reported of Putin’s remarks at the ceremony.

Putin seemed to speak directly to Brazilian ambassadors during the event. Continuing, the Russian head of state said:

We work together within the BRICS forum and the G20. Considering that, in 2022-2023, your country [Brazil] will obtain the status of a non-permanent UN Security Council member, we will cooperate even more intensely on the pressing issues of the global agenda at the UN platform.

Putin referred to BRICS, which is an association of emerging economies consisting of Brazil, Russia, India, China, and South Africa. The Russian president likewise referenced the G20, or Group of Twenty, which is an intergovernmental forum of the world’s largest economies, including those of Russia and Brazil.

“There is an interest from Russia here in Brazil. It’s a big consumer market,” he added.

Bolsonaro indicated at the time his visit to Russia would take place sometime in February or March of 2022.