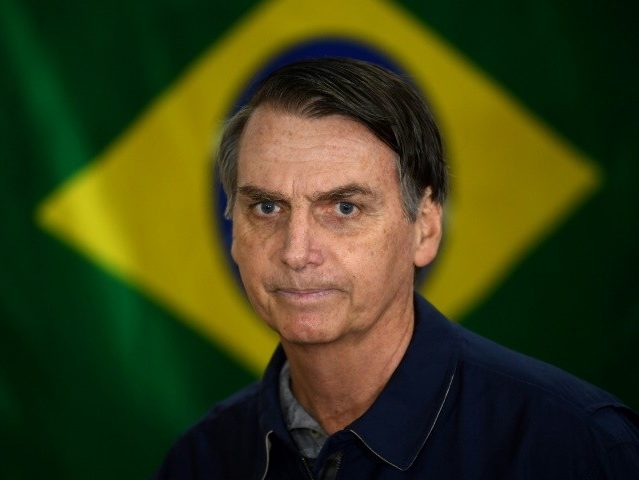 Brazilian President-elect Jair Bolsonaro’s choice for minister of defense revealed on Friday that intelligence services had thwarted a “terrorist” attack against the conservative future head of state, who survived an assassination attempt to win last week’s election.

Reserve General Augusto Heleno, who Bolsonaro has stated he will appoint defense minister when he takes office on January 1, said in an interview with the newspaper O Globo that Brazilian authorities had reason to believe Bolsonaro was the target of a plot to kill him.

Heleno revealed the plot in response to a question about rumors of such a plot exacerbated by the elevated presence of security in Brasilia and around Bolsonaro, who has spent much of the week outside the capital. Officials had insisted that heightened security around the president-elect had been planned long before Bolsonaro won Sunday’s election and would have occurred if his opponent, socialist Workers’ Party (PT) candidate Fernando Haddad, had won instead.

“The information suggesting that a planned terrorist attack against the president was thwarted is true,” Heleno said. “That was confirmed by intelligence authorities already.”

O Globo notes that the general did not specify who was planning the attack or any details about the nature of the attempt, including when they attack may have occurred if not prevented.

Bolsonaro has increased personal security around him since September, when a socialist fanatic attempted to stab him to death at a rally in eastern Minas Gerais state. The assailant told police that he had been “ordered by God” to kill Bolsonaro. The attack occurred during a campaign rally in broad daylight and was caught on video. Bolsonaro suffered severe damage to his abdomen, requiring reconstructive surgery in his digestive tract, and could not campaign for much of the last month before the first round of voting on October 7.

Bolsonaro did not appear in public when he won the election on October 28, instead delivering a victory speech from a private location. In his first public appearance since winning, which occurred at a church on Tuesday, his first words to the audience were “first, I want to thank God for being alive.”

In an interview Wednesday, Heleno, who will be responsible for imposing Bolsonaro’s right-wing law and order platform against crime, insisted that making Brazil a less violent place was a priority for the incoming administration.

Heleno protested that, due to “an inversion of values in our history,” the government stopped properly dealing with criminals and allowed drug gangs, organized criminal syndicates, and corrupt politicians to thrive.

“We cannot accept for us to walk little by little towards becoming a ‘narconation,’” he insisted. “The number of homicides in Brazil, the highest consumption of crack in the world, second-highest in cocaine, the highest passage of drugs [through the country] in the world. These are a series of titles that do not make the people proud.”

“It is absurd to treat this like a normal situation,” he continued. “This situation of excess deserves excessive treatment.”

In the same interview, Heleno addressed critics who fear that the Bolsonaro administration will violate legal procedures to capture drug criminals, insisting, “human rights are for righteous humans.”

While Heleno will be responsible for establishing order and organizing the war on drugs, Bolsonaro announced Thursday the addition of another political figure with a reputation for being tough on crime to his cabinet: Judge Sergio Moro, the magistrate responsible for issuing the warrants that made dozens of arrests of politicians under the investigation known as “Operation Car Wash” possible.

Working alongside Moro, investigators in southern Curitiba state found evidence of a nationwide corruption scheme in which politicians of several major political parties overpaid private contractors for public projects in exchange for kickbacks. Moro became a folk hero among Brazilians in 2016 after he issued warrants for several major political figures. Among those arrested, convicted, and sentenced by Moro are former President Luiz Inácio Lula da Silva and former Speaker of the House Eduardo Cunha.

“Federal Judge Sergio Moro has accepted our invitation to be minister of justice and public security. His anti-corruption, anti-organized crime agenda and his respect for the constitution and the law will be our guiding principle!” Bolsonaro announced on Twitter Thursday.