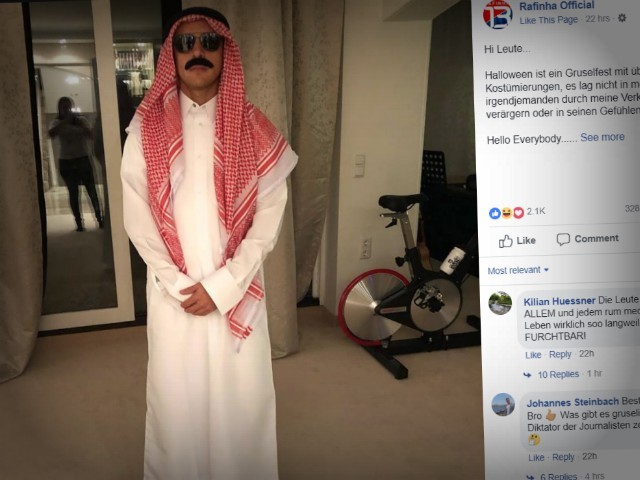 Brazilian footballer Rafinha was forced to apologise on social media after being slammed by critics for wearing an ‘Arab Bomber’ costume for Halloween this week.

The Brazilian, who plays for German club Bayern Munich, dressed in the typical traditional clothing of Arabs in the Gulf states with a long white tunic and traditional headdress.

The controversy came after social media users noticed that he had in his hands a package with the word “Vorsicht” — German for “Caution”, which many perceived as a reference to a bomb.

Rafinha what are you doing with that “Halloween costume”? And Bayern Munich, why would you tweet that out!? 🏽‍♂️#MiaSanMia pic.twitter.com/OKQ3CX7w3z

Shortly after the outrage online, Rafinha took to Facebook to apologize for the costume, saying: “Halloween is a scary celebration with exaggerated costumes, It was not my intention to anger anyone through my disguise or hurt someone feelings!”

“I have a lot of Arabian friends and I love every one of them,” he added.

Many social media users were also outraged due to the fact the official Bayern Munich Twitter page, which has 4.51 million followers, had also tweeted out the image of the Brazilian in costume. The club later scrubbed the tweet and retweeted the apology of the footballer instead.

Rafinha was not the only professional athlete forced to apologize for their Halloween costume this year. Snowboard champion Shaun White made an apology to the Special Olympics after dressing up as the mentally-challenged fictional character ‘Simple Jack’ from the 2008 comedy Tropic Thunder.

“The Special Olympics were right to call me out on it. They do great work supporting so many tremendous athletes, and I am sorry for being insensitive. Lesson learned,” White said on Twitter.

Despite the backlash, White found support from actor Ben Stiller who played ‘Simple Jack’ in the film.

“Actually Tropic Thunder was boycotted 10 years ago when it came out, and I apologized then. It was always meant to make fun of actors trying to do anything to win awards. I stand by my apology, the movie, Shaun White, And the great people and work of the @SpecialOlympics,” Stiller said.