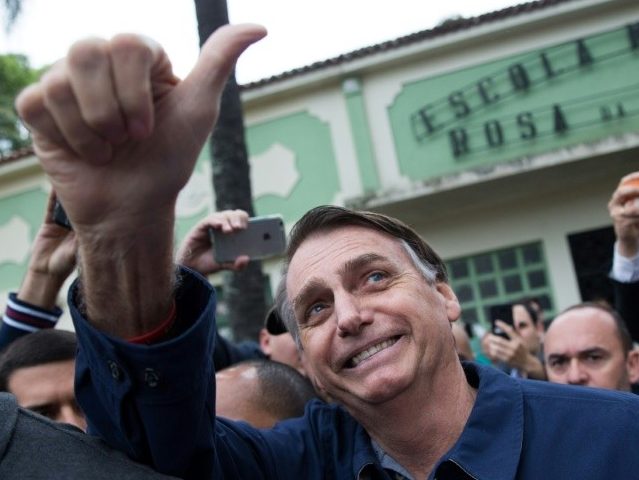 Jair Bolsonaro, conservative candidate in Brazil’s presidential race, is likely to achieve a historic victory Sunday despite an assassination attempt limiting his campaign schedule and reports of censorship on Facebook.

According to polling data released this week, Bolsonaro retains a 17-point lead over socialist Workers’ Party (PT) candidate Fernando Haddad, a strong indication that he is on course to be elected president, much to the shock and dismay of the country’s socialist political establishment.

The 63-year-old former army captain has also had the disadvantage of recovering from a near-fatal stabbing last month at the hands of a socialist who told police he was “sent by God” to kill the candidate. The incident rendered him largely unable to campaign and participate in public events. Rival Haddad criticized Bolsonaro’s failure to turn up to presidential debates, describing his opponent as a “fool” who was unable to defend his ideas.

Forced to limit his campaign schedule, Bolsonaro relied heavily on social media in the past two months to spread his message. This week, it also emerged that Facebook had censored dozens of accounts and pages from the candidate’s “main network of support,” supposedly for violating the network’s rules on spam and “fake news.” His opponents have also complained that Bolsonaro supporters are using Facebook’s messaging app WhatsApp to spread misinformation, although they did not present concrete evidence for such claims.

Bolsonaro’s populist platform as a law and order candidate appears to be successful, as many Brazilians say they are tired of a country that has seen crime rates soar over the past decade. In the first round, he won an impressive 46 percent of the vote, just four points short of an overall majority that would have seen him elected without a second round of voting. Haddad came second with 29.2 percent, followed by a string of other candidates who all fell way short of the required margin.

As well as a major crackdown on crime, he has also pledged to combat endemic leftist corruption and ensure that those involved in the country’s “Operation Car Wash” scandal, including former President Luiz Inácio Lula da Silva, are kept in prison for a considerable time. His promise to hold those guilty accountable appears to have pleased voters after years of millions-strong protests against corruption nationwide.

A former military veteran, Bolsonaro has also attracted worldwide controversy with remarks appearing to support the longstanding 20th-century Brazilian military dictatorship and dismissing the human rights violations of Chilean military leader Augusto Pinochet. He is also known for his hard-line conservative views and has outraged many Brazilian progressives by advocating Christianity, fiercely opposing LGBT rights legislation and any loosening of the country’s abortion laws.

Bolsonaro is also an admirer of President Donald Trump and hopes to build a stronger relationship with the United States, dubbed by some media as the “Trump of the Tropics” despite the few similarities between the careers of the two men. He plans to follow many of Trump’s foreign policy positions, including efforts to combat China’s aggressive inward investment in the region and recognizing Jerusalem as the capital of Israel.