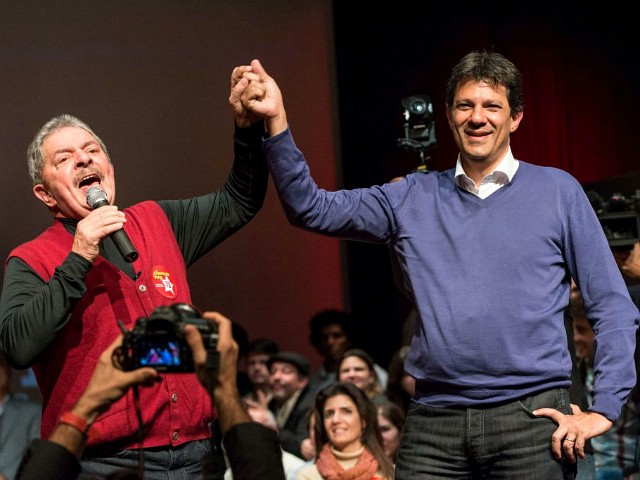 Fernando Haddad, the socialist Workers’ Party (PT) candidate for president in Brazil, made his first public act since securing a spot in this month’s run-off election a visit to prison on Monday, where PT leader Luiz Inácio Lula da Silva is serving a 12-year prison sentence for corruption.

The PT nominated Lula, who served as president of Brazil from 2003 to 2011, as their candidate for the election last year. A ten-year prison sentence for taking over $1 million in bribes to buy a luxury beachfront complex derailed his re-election ambitions, but the PT kept Lula on the ballot expecting the appeals court to overturn the conviction. Instead, on final conviction, the court extended Lula’s sentence to 12 years.

Brazil’s “Clean Slate Law” prevents politicians convicted of corruption crimes from running for office. Despite this, Lula refused to allow the PT to name another candidate until mid-September, giving Haddad mere weeks to campaign against his opponents.

On Monday, Lula displayed his supremacy over the party again as Haddad headed to southern Curitiba to visit him in prison, ostensibly for a game plan on how to face rival conservative Jair Bolsonaro in the second round. Brazilians will return to the polls on October 28 to choose between Haddad and Bolsonaro of the Social Liberal Party (PSL).

In Latin America, unlike in the United States, the term “liberal” typically refers to a preference for small government and individual rights over collective action and authoritarian policies.

Haddad’s visit to prison “will define the priorities in this stage of the campaign,” according to the Brazilian magazine Veja. Haddad is reportedly seeking Lula’s guidance in particular on how to court voters who opted for candidates other than Bolsonaro and himself during the first round.

Haddad did not provide details on what he discussed with Lula in prison. Instead, in a press conference following his meeting with the president, he praised the candidates that failed to make it to the run-off round of the presidential election, in particular, the left-wing environmentalist candidate Marina Silva and centrist Geraldo Alckmin.

“I am going to speak to the democratic forces in the country represented by some of the other campaigns,” Haddad promised, implying that Bolsonaro’s supporters were not “democratic.” “We have every interest in that the democratic, progressive forces be united … for social inclusion.”

Haddad also promised a complete overhaul of the government and significant “financial and political reform.” The PT was in power in Brazil from 2003 to 2016, when President Dilma Rousseff was impeached after protests against the socialists attracted millions. Haddad did not elaborate on what he meant by “reform” or what the PT had failed to implement reforms in its 13 years in power.

Haddad also repeatedly noted that he had only 22 days to campaign for the presidency and managed to beat out rival candidates for second place. He did not criticize Lula, however, for insisting on remaining the PT candidate despite being legally disqualified from running months ago over his corruption conviction.

The high profile that Lula appears to have kept within the party has triggered some significant criticism from within the PT. According to a report in Folha de Sao Paulo, one party official suggested that the priority of the party must be to create a “comfort zone” for voters to abandon Bolsonaro.

Both Haddad and Bolsonaro have high unfavorability ratings according to polls by major Brazilian firms, so some in the PT believe the right tactic is to attract voters who dislike both candidates by being lower-profile, a goal not achieved by visiting the party’s leader in prison.

The Veja report similarly suggests that “some among the PT are discussing whether the presidential candidate should take a more independent path from the ex-president to attract centrist voters.” Publico, a publication in Portugal, also published rumors that the PT is “fractured” over Lula’s presence, noting that on the other side of the debate are PT members who still use the slogan, “Haddad is Lula, Lula is Haddad,” to attract voters.

Lula appears on the header of Haddad’s Twitter page and is never too far from a quote from the candidate.

Haddad received 28 percent of the votes Sunday to Bolsonaro’s 46 percent. The tide of public opinion appears to be shifting rightward, as Bolsonaro overperformed compared to the last poll before the election, which found his support at 39 percent. The conservative candidate is running on a platform of abolishing unnecessary federal government agencies, reducing the size of government, imprisoning corrupt officials, tackling widespread crime, and expanding individual rights, particularly the right to bear arms.

Left-wing critics of the candidate argue that Bolsonaro has made inappropriately supportive remarks of the Brazilian military dictatorship in the second half of the 20th century and of Chilean leader Augusto Pinochet. Bolsonaro addressed those complaints in a tweet shortly following the confirmation of his first-round victory.

“The Workers’ Party financed dictatorships through BNDES [the Brazilian Development Bank]; annulled the legislature through the monthly allowance; has treasurers, promoters, and an ex-president in prison for corruption; wants to end Operation Car Wash; tried to control the media and internet,” Bolsonaro wrote on Twitter. “If anyone is threatening democracy, that someone is the PT!”

“Our country is large and prosperous, not a criminal gang to be commanded from prison,” he concluded. “Good night to all!”

Bolsonaro also tweeted a link to Haddad making his first act following the election a prison visit, stating dryly, “the choice is yours, ladies and gentlemen.”