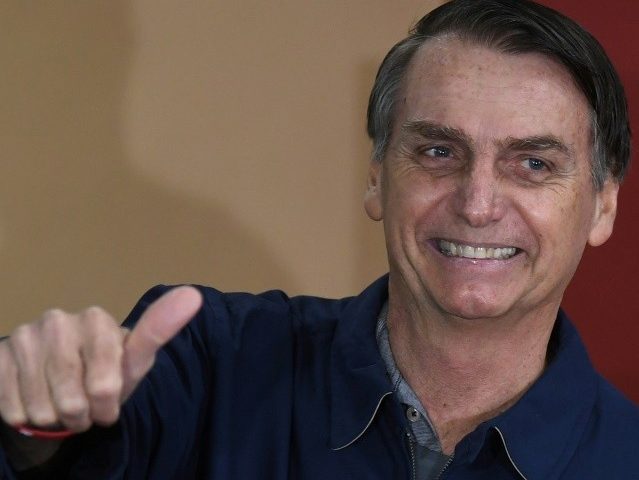 Bolsonaro, of the conservative Social Liberal Party (PSL), won the first round of the presidential election on October 7 with 46 percent of the vote against Haddad, of the socialist Workers’ Party (PT), and four other candidates. Haddad received 29 percent of the vote. As Bolsonaro did not reach the 50 percent threshold to win the presidency, the top two candidates must face off in a second election scheduled for October 28.

O Globo and Folha de Sao Paulo both note that this is the largest lead Datafolha has published since 2002, an election PT candidate Luiz Inácio Lula da Silva handily won. Lula was once the frontrunner in this race, as well, despite serving two terms until 2011. His candidacy ended dramatically with his arrest and conviction for taking over $1 million in bribes while president; he is currently serving a 12-year prison sentence.

Lula refused to allow the PT to nominate another candidate until mid-September, giving Haddad less than a month to campaign against Bolsonaro. In a move that highlighted Lula’s stranglehold on the party despite being banned from running for public office, Haddad’s first public event after securing a position in the second round of the presidential election was to visit Lula in prison and request guidance on campaign strategy.

Datafolha’s analysis of their first poll since the first round of elections found that Bolsonaro gained a significant lead on Haddad by attracting the support of former candidates Geraldo Alckmin of the centrist Brazilian Social Democrat Party (PSDB) and right-leaning Novo party candidate João Amoêdo. About half of both Alckmin and Amoêdo voters said they would now vote for Bolsonaro.

Bolsonaro has run a campaign calling for the reduction in the size of the federal government, the mass imprisonment of corrupt political officials, and a renewed embrace of Christianity in politics. His campaign slogan is “Brazil above everything; God above everyone.”

Haddad, in contrast, has campaigned calling for the government to expand its ability to distribute financial aid to the poor and on attacking Bolsonaro for being too far right of the Brazilian public consciousness. PT supporters generally have attacked Bolsonaro for comments he has made throughout his career appearing to justify the abuses of the Brazilian military dictatorship that ran the country in the late 20th century or excusing the policies of Chilean strongman Augusto Pinochet. They have also branded him racist and sexist, and even attacked his campaign slogan for being a “Nazi” phrase.

On Wednesday, Bolsonaro refuted claims that his campaign supports violence against those who oppose its ideology – a claim many on the left continued to make after a socialist fanatic nearly stabbed Bolsonaro to death at a campaign rally in September. The culprit told police he was “ordered by God” to kill the candidate.

“We reject the vote or any support to those who practice violence against voters who did not vote for me. To these people: I think you should cast a blank vote or vote for the opposition,” Bolsonaro wrote on Twitter.

Separately, he said, “There is also an organized movement attacking us by tying our campaign to Nazism, which, just like communism, we repudiate completely. It is just one of the many lies hurled against me. We admire and respect Israel and its people!”

The attacks appear to have failed, instead making Bolsonaro the centerpiece of the campaign without helping boost Haddad’s profile. Bolsonaro’s poll ratings went up following dozens of rallies nationwide the weekend before the election calling for feminists to vote against him. Support has consistently risen since the beginning of October, even with women, a constituency Bolsonaro continues to suffer a deficit with.

Thursday’s Datafolha poll found a virtual tie between the two candidates among women. 42 percent said they would vote for Bolsonaro, while 39 percent opted for Haddad, one percentage point outside the margin of error.

For the Bolsonaro campaign, the next step in the race is to increase support in the nation’s northeast – a socialist stronghold where much of the nation’s poor population lives. Folha de Sao Paulo published an analysis of the region on Thursday finding that many lifelong PT voters appear to be switching to Bolsonaro, hoping that the change he promises will work out better for them than what Lula’s tenure brought.

“I will vote for him because he is different,” Fábio Sebastião de Almeida, a previously loyal Lula voter, told the newspaper. “If he doesn’t deliver, we’ll kick him out later.” He added that he did not vote in the first round of elections because his 17-year-old son was killed a few days before the election.

“The violence is too great, this has to change,” he added.

Another voter, Fábio Apolinário, said he was voting for Bolsonaro because “I don’t believe the lies against him. I don’t believe in television. The truth is here.” He, too, voted for Lula da Silva.

“If Lula were a candidate today, I would think about voting for me. But the reality is that he is not a candidate, so I am going to vote for Bolsonaro to see if things change around here,” he told Folha.