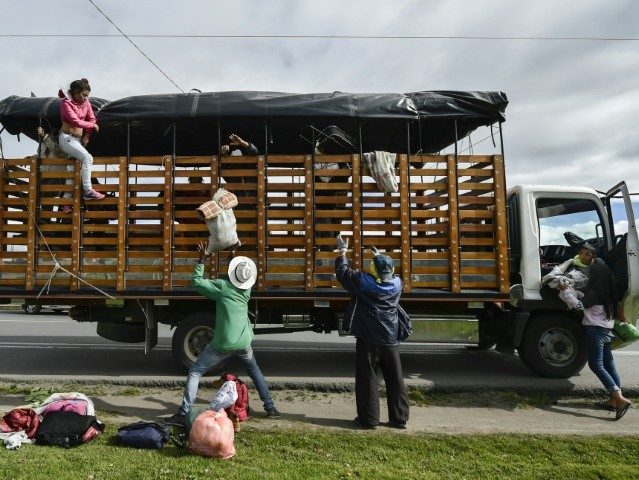 Brazil, Colombia, and other Venezuelan border states are struggling to treat the variety of serious illnesses refugees from the socialist state are bringing with them, a report from the Wall Street Journal detailed Wednesday.

The thousands of Venezuelan refugees arriving daily in Brazil’s and Colombia’s border towns often carry serious diseases such as malaria, yellow fever, diphtheria, dengue, and tuberculosis that they are spreading to local populations, according to Colombian, Brazilian, and Venezuelan health officials who spoke with the Journal.

The diseases, previously believed to have been eradicated, are now cropping up in cities hundreds of miles away from the Venezuelan border as local authorities seek to move refugees from border towns into other parts of the country.

According to Brazil’s health ministry, the border city of Manaus reported four possible cases of measles in March this year. By October, the number had risen to nearly 1,000 cases, all of which originated from Venezuela. Twelve of those people have since died of the infection. The Pan American Health Organization reports that cases of measles are spreading well beyond border towns, with new cases reported in Colombia, Peru, Ecuador, and Argentina.

“Individuals who are forced to exit the country without proper medical care can transmit a million different things, or have the potential to trigger an outbreak that no one can predict but that will eventually occur,” Dr. Irene Bosch, a research scientist from U.S. National Institutes of Health told the paper. “It is a perfect storm condition for a catastrophic medical situation.”

Such reports provide underline the severity of Venezuela’s migration crisis, in which thousands of people are fleeing the country every day in dire poverty and often in need of humanitarian assistance. Such movement has caused considerable tension and xenophobic backlash in local communities, an issue the spread of disease is only likely to exacerbate.

Last month, Ecuador’s leftist President Lenin Moreno, who some believed would be an ally of Nicolás Maduro, told the United Nations General Assembly that his country was taking in an average of 6,000 Venezuelan refugees a day, many with infectious diseases.

“In Ecuador, we are receiving at least 6,000 Venezuelan brothers daily,” Moreno said. “The children come with chickenpox, with diphtheria and polio; pregnant women come having never taken birth control.”

The Maduro regime reacted angrily to the claim, with Venezuela’s ambassador in Quito calling Moreno a “liar,” an insult that eventually led to his expulsion from the country.

The collapse in health services and resources remains one of the gravest aspects of Venezuela’s current predicament, where a socialist dictatorship has transformed this once wealthy nation into one of the poorest country’s in the world.

Under the late Hugo Chávez’s “Bolivarian Revolution,” the government enshrined state-provided healthcare into his version of the Venezuelan constitution. However, the inevitable collapse of its economy has left the government effectively bankrupt, meaning there is little to no money for hospitals most basic healthcare services.

In June, Venezuelan officials recorded the first case of polio in 30 years, while other previously eradicated health problems such as diphtheria also begin to re-emerge. Last May, public health statistics revealed that over 11,000 children under the age of one died in the year 2016, with figures likely to have significantly worsened since then.