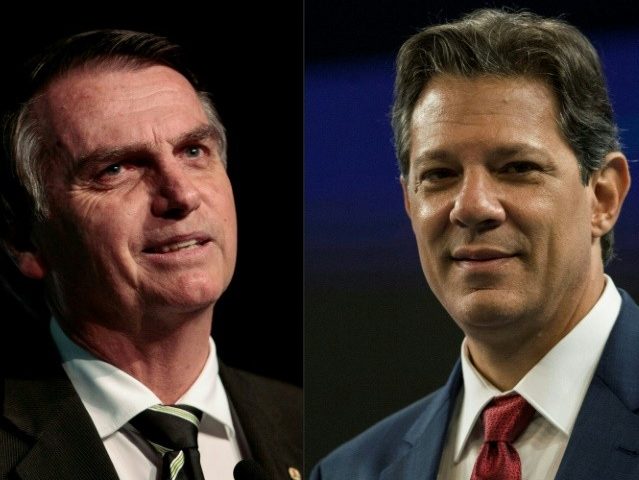 Fernando Haddad, the socialist Workers’ Party (PT) candidate for president of Brazil, published an attack ad on social media Wednesday implying that conservative rival Jair Bolsonaro’s victory would result in accidental homicides by children becoming the norm in the country.

Haddad trails Bolsonaro of the right-wing Social Liberal Party (PSL) in the latest polls for the presidency by 15 points. Brazilians are scheduled to go to the polls for the second round of their presidential election on October 28.

Haddad posted the attack ad on Twitter with the caption é pela vida, roughly translating to “it’s for our lives.”

The ad, filmed from the perspective of a young boy, shows the boy playing with an assortment of Star Wars toys as his parents call him to dinner. Over the sound of his father calling, “son, come and eat, it’s time,” the boy makes an abrupt turn before getting to the dining room and turns to the master bedroom, where he pulls a handgun out of his parent’s dresser. The boy then turns the gun onto his father and the screen goes black. The last sound in the video is of the gun going off, presumably shooting the father.

The tagline at the end reads, “Better get used to Jair?”, rephrasing a slogan that supporters of the conservative candidate have adopted online into a question. The ad thus implies that children unknowingly shooting their parents to death will be a new normal Brazilians must get used to under a Bolsonaro administration.

Bolsonaro is a strong advocate for the individual right to carry arms and has opposed legislation limiting the right of Brazilians to possess them. Instead, he has proposed “Second Amendment”-style protection of the right to bear arms, a view widely considered extreme in Latin America.

Brazil’s gun laws tightened in 2003 under former socialist president Luiz Inácio Lula da Silva, who promoted the law formally known as the Disarmament Statute, passed a year later. The Disarmament Statute instituted a more complex bureaucratic system to discourage legal gun ownership and, according to its supporters, took thousands of firearms off of the streets and the number of homicides between 2003 and 2004 decreased.

Lula was the PT candidate for president until September, when he stepped aside to give the nomination to Haddad. He held onto the nomination for months after the Brazilian Supreme Court ruled that he was banned from holding public office after being convicted of taking over $1 million in bribes as president. Haddad’s first public act after securing a place in the October 28 run-off vote was to visit Lula in prison.

As a legislator, Bolsonaro has championed reforms in the Disarmament Statute meant to equalize the number of registered and unregistered weapons. As a presidential candidate, he has made fighting crime and empowering civilians to defend themselves a key provision of his campaign platform.

“Weapons, beyond defending life, are a guarantee of our freedom,” Bolsonaro said at a campaign event in March 2018, encouraging supporters to responsibly carry firearms.

His support for gun rights has notably triggered a backlash among those on the left, not diminished by the fact that Bolsonaro personally suffered an assassination attempt in September. A socialist fanatic confessed to having stabbed the candidate at a campaign rally, forcing Bolsonaro to take weeks off of campaigning.

At the time, leftist presidential candidate Marina Silva used the occasion for call for more limits on gun ownership.

“Thank God that person [the would-be assassin] didn’t have a firearm. Bolsonaro was with several armed police, personal security, and that did not protect him … if it didn’t work for him, is it going to work for you, housewife?” she asked at a discussion with the newspaper O Globo.

The latest poll, taken by the Brazilian firm Ibope between October 13-14, found Bolsonaro with a significant lead over Haddad. 52 percent of respondents said they support Bolsonaro, while 37 percent said they supported Haddad. Only 2 percent said they did not know who they were going to vote for, and the rest stated they would cast an empty ballot. As Brazil has compulsory voting laws, those who would otherwise abstain from voting must cast blank ballots.