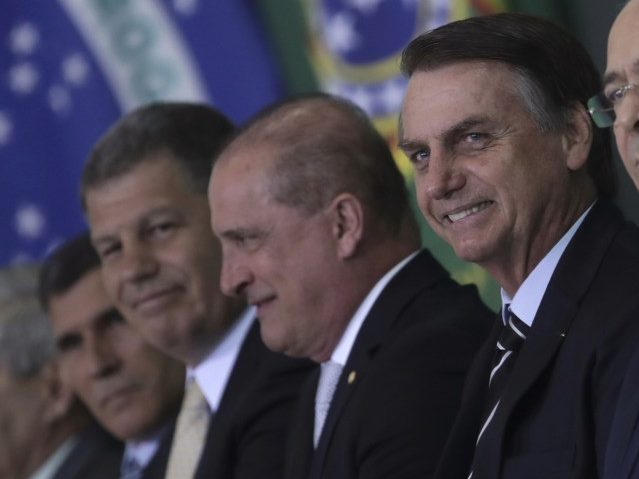 Bolsonaro, who defeated the socialist Workers’ Party (PT) candidate Fernando Haddad in October’s run-off presidential election, ran a campaign vowing to eradicate Marxist thought from the government and from Brazil’s schools and spearhead a movement of small-government conservatives in Latin America who opposed the ideologies of the region’s dictatorships, Cuba, Venezuela, and Nicaragua.

“Society said ‘enough’ to socialist and communist ideas which, in the past 30 years, brought us to the chaos were are living today,” Lorenzoni told reporters, explaining that this mandate made it necessary to remove Marxists from top positions in the government according to the Spanish news agency EFE. To accomplish this, the Bolsonaro administration will begin a review of some of the highest-ranking officials.

Bolsonaro’s chief of staff said that at least 320 government employees were notified following the cabinet-level meeting that they would be “evaluated” to ensure that their work goals were compatible with what Bolsonaro was hoping to accomplish in office. These would face “dismissal” from the government if Lorenzoni concluded that they held far-left ideological beliefs in conflict with his administration.

“It doesn’t make sense to have officials with antagonistic ideological orientations [working for us],” Lorenzoni asserted. “It is not reasonable to have socialists, communists, any of that stuff here.”

Lorenzoni was careful to specify that the process will not be a “witch hunt” and, to that end, “first we dismiss, then we discuss,” and those who are found to be compatible workers for Bolsonaro’s government will return to their positions.

The primary reason for this reevaluation, Lorenzoni explained, was that the PT had ruled the country for 14 years, most of the 21st century. While its two presidents fared poorly after their tenures – Luiz Inácio Lula da Silva is serving a 12-year sentence for corruption while president; Dilma Rousseff was impeached out of office and lost a senate bid last year – 14 years is over a decade of low-profile hires throughout the expansive Brazilian federal state infrastructure. Maintaining staff in key positions in agencies like the Foreign Ministry or the Ministry of Justice who oppose the reforms Bolsonaro campaigned on could make those reforms impossible.

The removal of “communists” from the government is part of the first major effort of the Bolsonaro administration: reducing the prodigious size of the Brazilian government. Bolsonaro officials have suggested that as many as 3,100 government jobs are expected to be cut at the federal level. Brasilia will also move to sell as many as 700,000 government-owned properties back into private ownership.

Bolsonaro made the eradication of Marxist thought from the government a priority as a candidate. In his inaugural address Tuesday, Bolsonaro declared his victory “the day in which the people began to free themselves of socialism, the inversion of values, state maximalism, and the politically correct.”

“That is our flag, which will never be red. It will only be red if it is necessary for our blood to keep her green and yellow,” he concluded. “We cannot allow nefarious ideologies to come and divide Brazilians – ideologies that destroy our values and traditions, destroy our families, the foundations of our society.”

Prior to assuming office, Bolsonaro also stated at a conservative conference that he would seek to create a global coalition against communism, particularly targeting the removal of toxic Marxist regimes in neighboring Cuba and Venezuela.

All of Latin America “knows what the consequences of the left are. The clearest example is Cuba, and the nation that most clearly approximates that reality is Venezuela,” he said, stating that Brazil, as South America’s largest country, has an “obligation” to lead in the effort to restore freedom in those countries.

Despite these declarations against communism, Bolsonaro held a friendly meeting with an envoy sent by the most powerful communist leader in the world, China’s Xi Jinping, relaying a message of cooperation to the Communist Party leader. China is Brazil’s largest trade partner as a product of a policy of distance from the West under Lula and Rousseff. Candidate Bolsonaro expressed concerns that “China is buying Brazil” and vowed to cut trade with Beijing down to a manageable level.

The president also met with U.S. Secretary of State Mike Pompeo this week, expressing hope that Brasilia-Washington ties would thrive during his presidency. He told reporters that he would discuss the implementation of a U.S. military base in Brazil with American officials “in the future,” given growing military operations by Russia in neighboring Venezuela.

Among other immediate steps the Bolsonaro regime has taken since coming into power Tuesday have been a modest increase in the minimum wage and the elimination of several cabinet agencies, including several on minority rights.