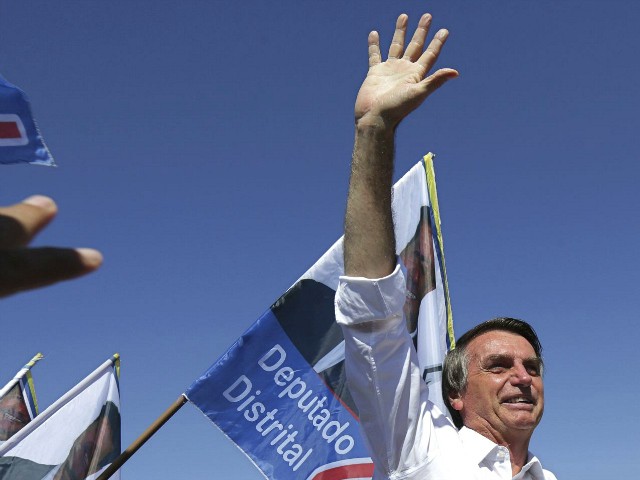 Brazilian conservative candidate Jair Bolsonaro gained six points among women voters in a poll released Tuesday, less than a week after he was accused of threatening to kill his ex-wife and after a weekend in which leftist feminist protests drew thousands to convene nationwide to reject his candidacy.

Bolsonaro has been the frontrunner in the Brazilian presidential race for months, comfortably surpassing second-place candidate, the socialist Workers’ Party (PT) Fernando Haddad. Brazilian law requires a run-off election if no candidate secures 50 percent of the vote the first time, however, and Tuesday’s poll shows no guarantees that Bolsonaro would win against Haddad in round two.

Brazilians go to the polls on Sunday.

The poll released Tuesday, taken by the firm Ibope, found 24 percent of women eligible voters choosing Bolsonaro, up from 18 percent last Wednesday, a six-point increase. Overall, Bolsonaro is leading the pack with 31 percent of the vote compared to 21 percent for Haddad. Leftist candidate Ciro Gomes of the Democratic Labor Party (PDT) comes in third with 11 percent of votes. Notably, Bolsonaro increased his support by four percent – largely fueled by the women vote – while Haddad’s support barely changed, indicated that he is gaining votes from supporters of less popular candidates who are switching allegiances.

The Brazilian magazine Veja notes that the Ibope poll is the first to show Bolsonaro with over 30 percent support in this election in either Ibope or Datafolha polls, the two major polling agencies tracking the election.

Where Bolsonaro faces his most significant challenge is in a potential run-off vote with Haddad. According to the Ibope poll, both Bolsonaro and Haddad would receive 42 percent of the vote if the election were held Tuesday. 16 percent of respondents said they would cast a blank ballot (voting is compulsory in Brazil, so those who do not support any candidate must cast a blank ballot). Only three percent said they were undecided.

Haddad and the left in Brazil generally made a widespread appeal to women this weekend, attempting to paint Bolsonaro’s policies as negative for women and Bolsonaro personally as a sexist.

“In my walk I have repeatedly seen Bolsonaro fans offend women,” Haddad told an audience on Saturday. “I keep asking myself what is going on in these people’s heads.”

Saturday saw widespread protests nationwide under the slogan “ele nao,” or “not him,” a reference to Bolsonaro. While featuring PT and hard left organizations, the protests were billed as a feminist event and social media invitations to attend them appeared to target women.

Bolsonaro also appeared to take a hit with women voters last week after the newspaper Folha de Sao Paulo published a diplomatic cable it claimed revealed that Bolsonaro’s ex-wife, Ana Cristina Valle, feared for her life when they divorced and considered asking for political asylum in Norway to get away from him. The cable claimed that Valle had told a Foreign Ministry official Bolsonaro threatened to kill her.

Valle, running for a legislative seat in Sunday’s election still using the last name “Bolsonaro,” published a video shortly after the Folha report went live denying that Bolsonaro ever threatened her or that they were on bad terms. She heartily endorsed his campaign and stated that she intended to vote for him.

Yet the alleged author of the diplomatic cable, then-Brazilian ambassador to Norway Carlos Henrique Cardim, confirmed the legitimacy of the cable to O Globo.

In this news cycle, Bolsonaro gained six points in votes among women.

Bolsonaro is expected to return to the campaign trail this week after suffering an assassination attempt in early September. A socialist who told police God commanded him to kill Bolsonaro stabbed the candidate during a campaign event, keeping him hospitalized and in critical condition for nearly a month.