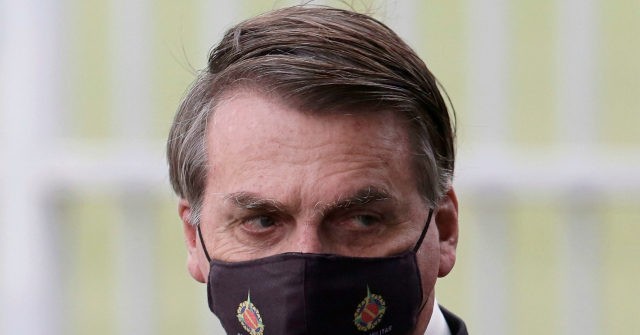 Brazilian Foreign Minister Ernesto Araújo announced on Tuesday that his country had joined with Australia, European Union members, and other countries to propose a complete overhaul of the World Health Organization (W.H.O.) in light of its poor handling of the Chinese coronavirus pandemic.

The W.H.O. is currently facing global condemnation for its inability to contain the pandemic and aid countries in limiting their exposure. Among the actions the United Nations agency took that have inspired criticism are the W.H.O. choosing to ignore critical information on the virus from Taiwan on its ability to spread from person to person, then claiming in January that human-to-human transmission was not occurring. In reality, the coronavirus is highly contagious and has spread at alarming rates.

W.H.O. chief Tedros Adhanom Ghebreyesus, who is not a medical doctor, responded to Taiwan revealing its messages to the W.H.O. by claiming, without evidence, that the island nation had launched a campaign of racist invective against him.

Multiple reports have revealed that the Chinese Communist Party urged the W.H.O. to hide the contagious nature of the virus even when scientists were aware of it and pressured it to delay announcing that the epidemic had become a pandemic, threatening all nations of the world. The W.H.O. declared a coronavirus pandemic the day after Chinese dictator Xi Jinping visited Wuhan, the origin site of the pandemic, and asserted that China’s regional outbreak was over.

In light of this concerning behavior, Araújo asserted at a meeting with other senior-level Brazilian leaders that Brasilia would back a formal probe into how the W.H.O. handled the outbreak.

“Brazil is proposing an investigation, along with a group of other countries, into a process of reform for the W.H.O.,” Araújo said on Tuesday. “We are coordinating with Australia, the European Union, and other countries for this essential examination of what happened and what is happening with the W.H.O. Every day is another decision, this back-and-forth by the W.H.O. hurts the efforts of all countries.”

Araújo appeared to be referring to the W.H.O.’s most recent blunder: declaring that it had reason to believe asymptomatic carriers only “rarely” spread the Chinese coronavirus, then abruptly rescinding the statement.

“From the data we have, it still seems to be rare that an asymptomatic person actually transmits onward to a secondary individual,” Maria Van Kerkhove, head of W.H.O.’s emerging diseases and zoonosis unit, said on Monday. By Tuesday, Van Kerkhove admitted, “we don’t actually have that answer yet.”

In addition to criticizing the W.H.O. for mixed messaging on the dangers of the virus, Araújo also hinted at the W.H.O.’s ties to China, which the United States and other nations have highlighted as problematic at best.

“Itamaraty [the Brazilian Foreign Ministry], always in coordination with the Health Ministry, follows the role of the W.H.O. with much concern. The lack of independence of the W.H.O., apparently, lack of transparency and coherence, above all,” Araújo said. “Lack of coherence in its positioning, its orientation over essential aspects.”

“The sharing of samples, human to human transmission, modes of prevention, quarantine, the use of hydroxychloroquine, protective clothing, and now the intransmissibility by asymptomatic people,” the minister continued. “In all these respects, the W.H.O. has flip-flopped, sometimes more than once. That worries us.”

The W.H.O. repeatedly issued public compliments to the Chinese Communist Party for its handling of the Chinese coronavirus, even as reports surfaced that the Party destroyed pivotal virus samples, arrested doctors for sharing infectious disease prevention tips, and engaged in other untoward behavior. Multiple reports have surfaced since accusing Tedros of having a conversation with dictator Xi Jinping in which Xi asked the W.H.O. to delay sharing information on how contagious the virus is and delay declaring a pandemic.

A Reuters report surfacing last week indicated that the agency was aware of China actively endangering public health investigations but continued to praise Beijing publicly out of fear that not doing so would lead to Chinese agents physically harming doctors cooperating with the W.H.O.

Araújo did not specify what the proposal Brazil would help bring to the table would look like. The W.H.O. already agreed to an investigation into its handling of the virus, but only after the pandemic has subsided, and with China’s support. At the World Health Assembly, the agency’s annual global meeting, Chinese dictator Xi Jinping urged for the investigation to wait until the end of the pandemic but did not define what an end to the pandemic would look like, given that the virus is spreading at different rates throughout the world, and no longer spreading at all in many regions.

Araújo’s statements followed remarks by conservative Brazilian President Jair Bolsonaro last week in which he floated the possibility of withdrawing from the W.H.O. entirely.

“The United States will leave the W.H.O. and we are studying, in the future, either the W.H.O. does its work without ideological bias, or we go that way, too,” Bolsonaro told reporters on Friday evening. “We don’t need anybody from abroad to advise on health in here.”

President Donald Trump announced a withdrawal from the W.H.O. last month – a significant move for the agency given that America pays for most of its funding.

“We have detailed the reforms that it must make and engage with them directly, but they have refused to act,” Trump said. “Countless lives have been taken and profound economic hardship has been inflicted all around the globe.”